Albemarle police have identified the suspect who fired a high-powered rifle at an officer during an attempted traffic stop. 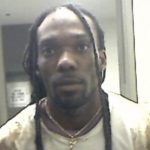 Police say Jeremiah Devon McDougald, 32, of Broadway, is the man who shot at an Albemarle police officer through the sunroof of a stolen Lexus. Arrest warrants have been obtained for McDougald.

A passing motorist was wounded in the gunfire.

Albemarle police officer Blake Evans said he first spotted two suspects in a black Lexus stopped in the road near East Albemarle. He could tell something was amiss, prompting Evans to follow the car.

As Evans pulled up behind the Lexus on the bypass he heard the radio call about an earlier shooting that involved the Lexus. 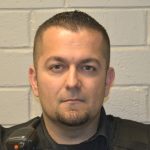 “I think I’m behind it,” Evans recalled responding on the radio. “Then I saw a black male stand up through the sunroof with a black AK-47. Our eyes locked as I began to lower my body as low as I could. I heard the snaps of the shots and the impact into the car.”

Evans said he next threw his cruiser into reverse while simultaneously reaching for his service weapon.

“I knew I had to put as much distance between me and the shooter,” Evans said.

Evans resumed pursuit of the suspects before his cruiser struck a curb and became disabled. A round from the rifle had struck the cruiser’s radiator. The shots also disabled the car’s radio.

“I then watched them drive away,” Evans added. “I was pretty upset.”

Three rounds struck the officer’s cruiser as he attempted to stop the Lexus. It was determined the suspects and the Lexus were connected with an earlier shooting on T.E. White Drive near Elizabeth Avenue.

After shooting at Evans, McDougald and the other suspect, who has not been identified, fled the scene traveling east through Montgomery and Moore counties. Biscoe police then chased the suspects.

Moore County Sheriff Neil Godfrey said deputies deployed Stop Sticks at a roadblock, but the suspects jumped from the car and fled on foot.

Once investigators ran the license plate of the car, it was discovered the car had been reported as stolen from Nash County, Godfrey said.

Found inside the car was a shotgun and ammunition, but no sign of a high-powered rifle, he added.

“My concern became for officers going into the woods while the suspect is armed with an AK-47. He could have used the weapon against us,” Godfrey said.

After waiting for backup and a bloodhound for tracking, the officers began a ground search. Officers later found the AK-47 discarded on the trail.

Moore County authorities terminated their ground search Tuesday with no sign of McDougald. Investigators believe he managed to get out of the county.

McDougald faces a number of felonious charges including attempted first degree murder and assault with a deadly weapon with intent to kill.

Law enforcement advises the public not to approach McDougald, who is considered armed and dangerous.

McDougald’s hometown of Broadway is located in Lee County, contiguous to Moore.

Police credit the cooperation and support of the Albemarle community with successfully identifying McDougald as the suspect in the shooting.