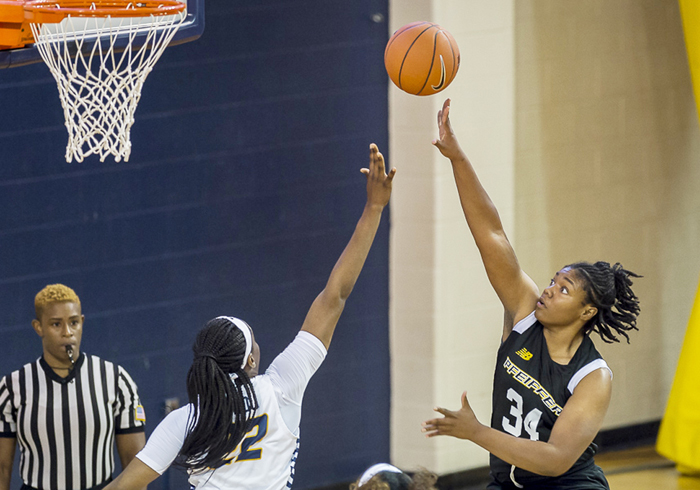 Ja'Mia Johnson goes for a jumpshot in a recent exhibition game for the Falcons at UNC-Greensboro. The Falcons' regular season opened with a road win at Randolph. (Photo courtesy of Sean Meyers Photography)

The Falcons had three players score in double-figures with A’Mya McClain (Hickory, N.C.) leading the way with 20 points to go along with seven rebounds. Junior teammate Kortni Pinion (Stanfield, Va.) had 15 points and senior guard Sydni Bickford (Concord, N.C.) had 12 points and seven rebounds in the win.

In the first quarter, neither team could gain a significant lead, with the teams battling through six ties. Randolph would get a three-pointer with five seconds remaining to take the 23-20 lead after the first quarter.

In the second, Randolph outscored the Falcons 20-11 to take the 43-31 lead into halftime.

Pfeiffer would respond in the third quarter, going on a 18-5 run to take the 49-48 lead at the 3:12 mark. Pfeiffer would then go on to go up by as many as nine points (60-51) when McClain knocked down two free throws with 33 seconds left.

The Wildcats would get a free throw to close to 74-72, but it was as close as they would get, as Pinion hit two more free throws with three seconds to play to provide the 76-72 final.