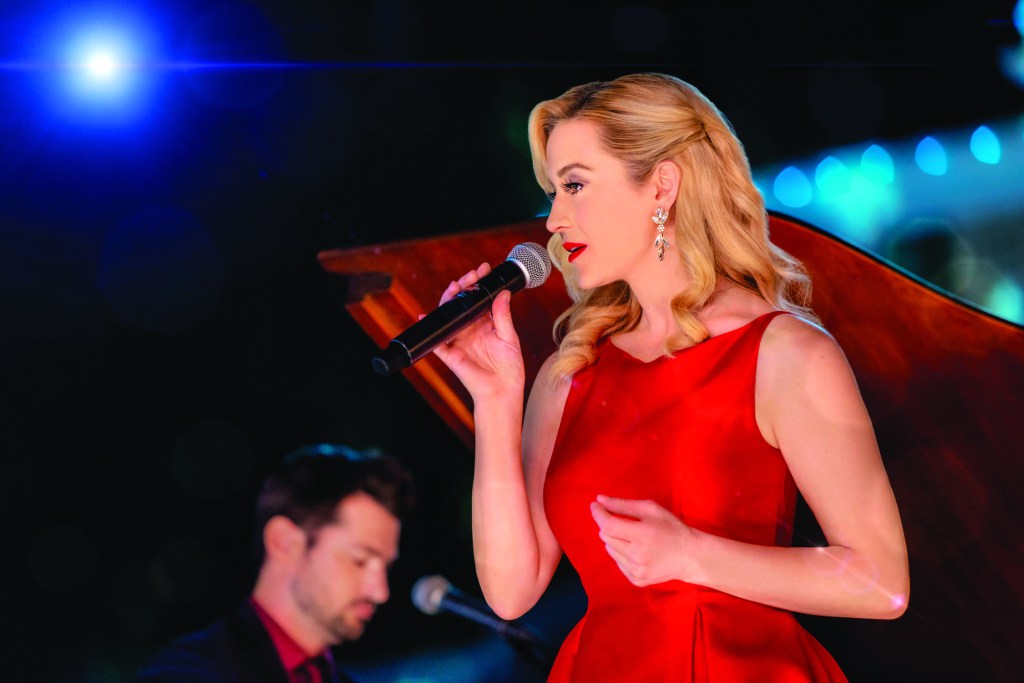 As interim school superintendent Eve trims budgets, and now shes in her hometown where its personal. Her handsome neighbor Liam is a music teacher and Eve feels his program must be cut. But luckily her friend is married to an IT guy, whos created a website for donations directly to save the Arts program. Launched during the tree lighting ceremony, where Liams students will perform, the website could provide the Christmas miracle the town needs. Already the Universe is cooperating. Eve is back home and she, Liam and his daughter look like they might be celebrating many a future Christmas. Photo: Kellie Pickler Credit: ©2018 Crown Media United States LLC/Photographer: Katherine Bomboy

Albemarle native Kellie Pickler stars in “Christmas at Graceland,” which premieres at 9 p.m. Saturday on The Hallmark Channel.

The following synopsis of the film is from Hallmark:

As Christmas approaches, Laurel Cooper (Kellie Pickler), a Chicago businesswoman and single mom, balances her demanding career with raising her seven-year old daughter, Emma (Claire Elizabeth Green). When she’s sent to her hometown of Memphis to close a lucrative deal — and acquire a local bank chain for her financial company’s portfolio — Laurel takes Emma to a guesthouse on Elvis Presley’s world-famous Graceland estate. There, amid the elaborate holiday decor, Laurel comes face-to-face with her ex-boyfriend, Clay (Wes Brown), a handsome local concert promoter, who she abruptly walked out on years earlier when they performed together as an up-and-coming musical act. Though still upset with Laurel for leaving as they were on the verge of a record deal, Clay finds himself becoming romantically interested in her once again. But despite Clay’s desire to rekindle their romance, Laurel remains focused on taking care of business and returning home with Emma by Christmas Eve.

While Emma enjoys the holiday season at the Memphis home of Laurel’s old friend Sally (Tamara Austin) and her young daughter, Laney (Madison Alsobrook), Laurel sets up a business meeting with Franklin (Tommy Cresswell), president of the local bank chain, hoping to swiftly close the deal.

But to Laurel’s surprise, Franklin’s concern with protecting his employees from profit-motivated layoffs and preserving the bank’s family-style culture precludes him from accepting her company’s offer. Meanwhile, Clay goes to work arranging Graceland’s Christmas Eve concert, hoping the show’s success will land him his dream job of working at a major New York music management company.

As Christmas Eve draws near, the concert’s headlining act suddenly drops out and Clay asks Laurel to perform a duet with him in their place. With Clay’s encouragement, Laurel begins loosening up and enjoying a host of fun local Christmas activities. Before long, she finds herself falling back in love with the easygoing Memphis lifestyle and with the spontaneous Clay, who begins questioning his desire to give up Memphis for a fast-paced career in New York.

But when Laurel’s boss, Hatcher (Ned Vaughn), discovers she hasn’t yet closed the deal — and that she’s been “distracted” by her upcoming performance in the Graceland Christmas show — he demands she immediately return to Chicago.

With Christmas Eve at hand, a saddened Laurel prepares to leave Graceland and tells Clay she won’t be able to perform in the show. As the concert begins — and Clay is offered his dream job in New York — Laurel yearns to return to her hometown roots and must decide whether to go back to Chicago or embrace a new life — and maybe a holiday romance — by spending Christmas at Graceland.