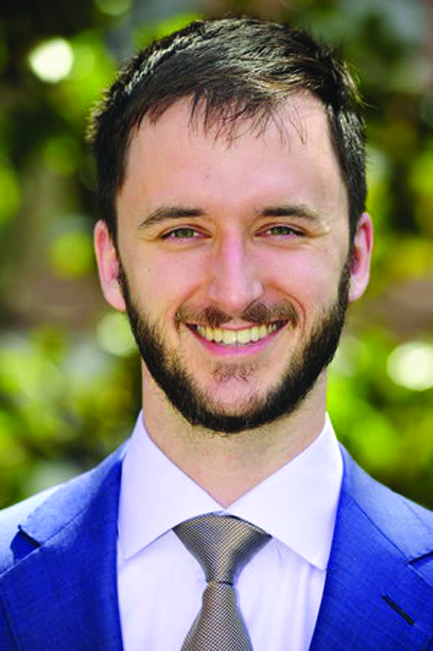 How many twenty-somethings from the hills and pastures of Stanly County have been wined and dined in Washington, D.C. at an elegant French Renaissance mansion on Massachusetts Avenue or at the venerable Smithsonian Institution on the Washington Mall?

If asked, Truett Preslar, a longtime Stanly County teacher, would have said he knew of no one. But then he heard that his son, Adam, had been invited to receive an award from the Creativity Foundation in the nation’s capital where he would mingle with people accustomed to posh surroundings. The news came too late for Truett and Bonnie Preslar to join Adam for the festivities.

Adam Preslar flew from London to Washington, D.C. For three days the young man from Red Cross was part of an event celebrating the glory of creativity and achievement across many disciplines — one of six young people from around the nation being recognized with the Legacy Award. Susan Centofanti of the Creativity Foundation says Adam and his peers were chosen for their creative promise and innovative work in the sciences, the arts, the humanities, public service and entrepreneurship.

The events began with an informal dinner where Adam met the other Legacy Award winners and 2018 distinguished Creativity Laureate Henry Louis Gates, Jr.

Since its inception in 2000, the Creativity Foundation has recognized an extraordinarily accomplished individual.

“Dr. Gates is a distinguished professor and director of the Hutchins Center for African and African American Research at Harvard University. He has authored 22-two books and hosted several acclaimed PBS series, including ‘Finding Your Roots.’ It was an honor to meet him,” said Adam.

In an email, Adam writes from his home in London, “The Laureate program winners are really spectacular contributors to current events and world culture. I certainly would not turn them down if they called me up, but will not be surprised if they do not.”

According to Centofanti, the Legacy Award for young people was inspired by Benjamin Franklin’s 1789 will, where he stipulated a Legacy Award of a silver medallion be given to outstanding students at Boston Latin School, the oldest public school in America.

Fast forward more than 200 years to 2018 where Adam and five other Legacy Award winners received their silver medals following a Creativity Round Table discussion with Gates and Creativity Foundation Board members at the Cosmos Club.

Conversation continued over lunch and at an informal dinner. The subject matter could leave most mortals with nothing to say: music composition, literature, chemistry, cancer research, imaging technologies, history of orphan trains, agricultural technology. To categorize these young people or their Laureate mentors as simply science students, or musicians and composers, or teachers, or inventors reveals only one facet of each individual’s achievements.

So how did Adam Preslar enter this rather exclusive circle of thinkers, innovators and catalysts?

Like the people he met in the nation’s capital, the answer is multi-dimensional. According to Adam’s dad, the familiar “nature vs. nurture” debate about child development misses the point.

“It’s nature and nurture,” he says.

“Lots of children have capability but aren’t pushed or doors aren’t opened for them,” says the former public school educator.

From Adam’s earliest stages, Truett Preslar says his son loved learning, was driven and active. He became a voracious reader with wide interests. Then at the age of 12 he discovered the North Carolina School of Science and Mathematics, a two-year public residential school in Durham. He told his parents he wanted to go there.

“We committed to keep and open mind and a blank face,” admitted Truett.

After his sophomore year at West Stanly High School, Adam’s parents agreed he could attend NCSSM — there are no fees for tuition, meals, lodging and textbooks, but the specialized curriculum, according to the NCSSM website, requires high academic ability and commitment to scholarship.

Truett says his son competed on academic teams, traveled to Europe during a mini-term and assisted in a chemistry lab.

Adam’s advice to other students: “Take the harder classes, try out the new ideas and take the risks. You cannot grow without risking failure.”

Graduation from NCSSM moved Adam from Durham to Chapel Hill where he majored in chemistry and Chinese at the University of North Carolina. He founded the Chinese Language House as a residential language immersion opportunity, and traveled to China twice before beginning graduate work at Northwestern University in Illinois.

At Northwestern Adam met his wife Jane, a post-doctoral student of Chinese descent. The couple moved to London because of Jane’s work with Google.

“Many of the skills and knowledge I gained in pursuing that degree were connected to materials science and biology,” he said.

Somewhere along the way, agriculture came into view.

A course at Northwestern called NUvention brought together students from different disciplines to encourage development and new ideas for businesses. Out of that experience, Adam and another student, Aidan Mouat, founded Hazel Technologies in 2015, a company working to change the food waste statistics. They wanted to give produce a longer life — a development Stanly County farmers can relate to.

Adam explains, “At Hazel, our packing technologies increase the shelf-life of produce by slowing and controlling ripening to make sure fruit arrives in pristine condition, wherever it goes from the farm.”

Those current technologies come in small sachets to be placed in boxes of produce.

“I work with our horticultural scientists and with academics around the world to build the case for our technology in a wide range of types of produce. We work with everything from apples to zucchini,” says the entrepreneur.

Dustin Adcock, NC Cooperative extension agent in Albemarle, agrees that food loss is a problem that isn’t going away.

Some estimates of the loss from farm to fork to landfill are as high as 40 percent of all food, with fruits and vegetables accounting for 22 percent of food loss.

“The greatest impact on food availability in the next millennium will likely be found through reducing loss and maximizing the usefulness of crops grown,” said Adcock.

He speaks of the creativity of a farmer who was losing 70 percent of his carrot crop because of irregular and misshapen carrots. By carving them into “baby” carrots he increased his profit by $0.33 a pound.

“As co-founder and chief technology officer, I think a lot about how to adapt our products and technologies to new applications or invent wholly new ways of helping growers to store and transport produce with less waste,” said Adam.

He continues to combine creativity, technology and science as he works to solve problems.

Adam Preslar may have left Stanly County in his search for opportunity, but he has circled back to his soil-rich Piedmont roots for they highlight his purpose of stemming food loss here and around the world.