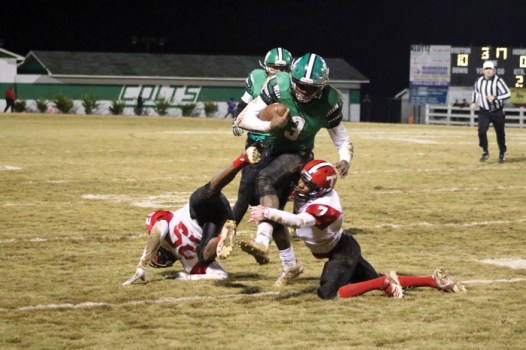 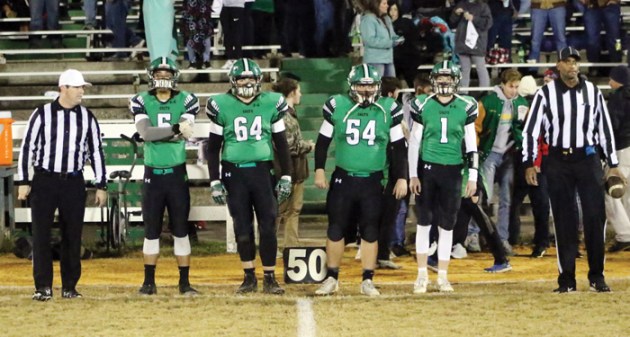 A strong running game and defensive effort from the West Stanly Colts gave them their first playoff victory in 12 years Friday.

“Playoff wins are huge – it feels fantastic,” West Stanly head coach Brett Morton said. “It was ugly but in the end, we got it done. The kids worked their butts off and this is all about them; they deserve it.”

Bulldog kicker Agustin Villagomez-Rodriguez nixed a scoreless game with a 37-yard field goal with 16 seconds left in the first quarter. Thomasville made it a 10-point game after senior Feronta Thomas’ one-yard touchdown rush at the 5:40 mark in the second quarter.

After that slow start, the Colts were ultimately able to erase their 10-point deficit and keep the Bulldogs’ offense in check the rest of the game.

A big kick return by West Stanly’s Hunter Stoker set up a touchdown drive powered by the running back tandem of Jordan Poole and Lukas Scott. Poole found the end zone with a 19-yard dash with 1:37 left in the half.

Poole and Scott were dominant on the drive, combining for eight carries of four yards or more.

“They have done really well down the stretch,” said Morton. “Their footing wasn’t good tonight but at the end of the day, those two guys get it done.”

The real momentum-shifter occurred a minute later as Colt defensive end Koltyn Hatley recorded West’s go-ahead score – the senior picked up a fumble at Thomasville’s five-yard line and returned it for six points.

Though the second half was a low-scoring affair, West extended its lead to 21-10 with a 30-yard halfback pass from Scott to Brack Morgan for a touchdown midway through the third quarter. That play was set up by a ferocious run from senior Jaquan Ingram.

Bulldog quarterback Landon Johnson found senior Timothy Brooks Jr. for a 42-yard pass completion that led to Thomasville’s only points of the second half. At the 8:36 mark in the contest, the Bulldogs ended their scoring drought by means of Villagomez-Rodriguez’ second field goal of the night – a 25-yard kick to make it a 21-13 game.

With 1:28 left in the game, a Colt fumble put the Bulldogs in the driver’s seat to try and force the game into overtime. Thomasville put together a spirited drive that stalled after an incomplete pass and turnover-on-downs at the 12-yard line. West was then able to kneel out the rest of the clock.

The Colts’ next opponent, Wheatmore, recorded a 24-0 shutout over Patton Friday night.