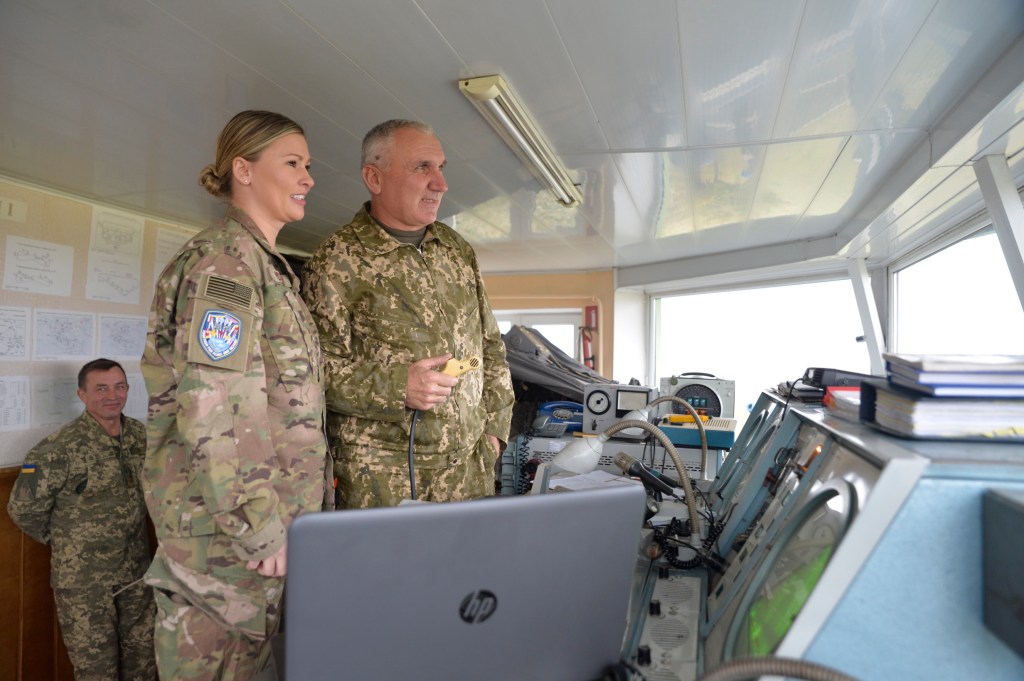 By Christopher Sparks, for the SNAP

Her journey began earlier this year in July at Ukraine’s air traffic university in Kharkiv, Ukraine, during a planning conference for the Clear Sky 18 exercise. The conference served as an opportunity to build a relationship between Ukrainian and U.S. air traffic controllers.

It aims to enhance regional capabilities to defend air sovereignty and promote peace and security through cooperation, collaboration and interoperability with partners and allies in the region.

During the Clear Sky 18 exercise, hosted at Starokostiantyniv Air Base, Ukraine, she became the first U.S. Air Force female controller to work inside of a Ukrainian air traffic control tower in the history of Ukraine and its military.

“It’s been a great experience,” Plumley said. “I’m proud to represent my unit, my country and the U.S. Air Force.”

For the past 18 years, the Ukrainian armed forces have been predominantly composed of male service members, with women serving in limited roles. This uneven distribution of gender representation positioned women in non-essential roles.

From the beginning, Plumley had to overcome obstacles as a result of cultural differences.

“They thought I wasn’t an air traffic controller because I was a woman,” Plumey said.
However, the adversity didn’t last long for Plumley. Shortly after the beginning of the exercise, she gained the respect and trust of her peers.

“We’ve built a lot of trust in just the three days since we’ve started the exercise,” Plumley said. “Now I come into work in the morning and they ask me, ‘Jacqueline, what’s your opinion on this?’ and shake my hand. It’s a great feeling knowing we are on the same level.”

During Clear Sky 18, Plumley was tasked with coordinating Ukrainian aircraft departure and arrival times while simultaneously weaving her unit’s aircraft into the schedule.

“She’s confident,” said Ukrainian air force Capt. Vlad Vren, air traffic controller, assigned to Starokostiantyniv AB. “She’s a good example of how to get the job done, and she’s proficient at it.”

The camaraderie, developed throughout their short time working together, culminated in a strong partnership that resulted in successful execution for the duration of the exercise.

“I just hope seeing my work and how my pilots and I respect each other, and how our team works so well together changes their view of women in this career field,” Plumley said.

Airman 1st Class Christopher Sparks is with the public affairs for the 48th Fighter Wing.