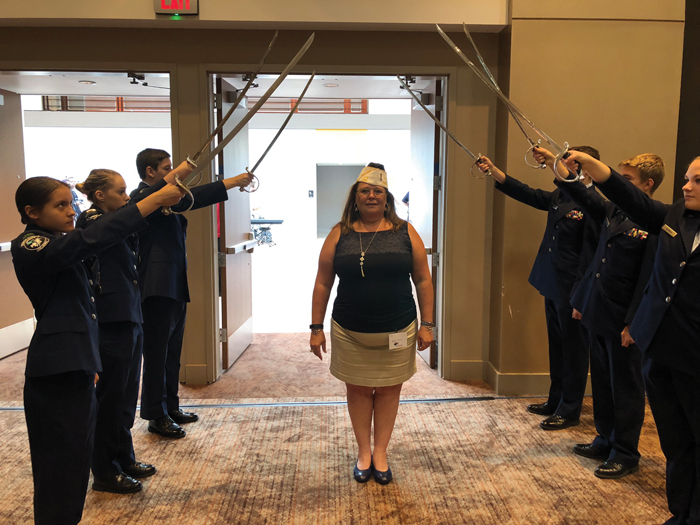 Bobbi Sheets attends the Saluting Women Veterans dinner in Winston-Salem during June. She hopes her role as commander of VFW Post 6365 brings out more women veterans to meetings and events. (Contributed)

Bobbi Sheets has never been one to beat around the bush.

“Women serve, too,” Sheets said. “Others might not be bold enough to say something, but I’m real quick to stand up.”

And as the first female commander for VFW Post 6365 in Locust, that passionate attitude is spreading quick. Since the she took office two years ago, the Post’s membership has gone up from about 20 members to 43, seven of which joined in the last few months.

“About 50 percent of those are below the age of 55 and several are women,” Sheets said. “So it’s been exciting.”

And for a woman who served 13 years in the Air Force, having a mission like that feels a bit like coming home, she added.

“There’s nothing like the tough stuff to remind you of what you can do,” Sheets said. “It’s good to have something to focus on.”

However, Sheets didn’t start out with quite that mindset.

Surprisingly, she joined the military for what some might call more “girly” reasons.

Raised near the Air Force base in Grand Forks, North Dakota, Sheets said she saw a recruitment demonstration during her freshman year of high school.

“There were a couple of women in blue uniforms with them,” Sheets said. “They had the scarfs on and the blue skirts and the hats and the ribbons. All these ribbons. They looked amazing.”

She happily admits it was a silly reason for wanting to join the Air Force, but that’s what got her.

“I wanted to look like that, to look sharp,” Sheets said. “From the time I was a freshman in high school I was determined that I was going to be in the Air Force and wear all those ribbons like them.”

After talking to recruiters for three years, she knew it was not going to be easy, though.

Judging by her aptitude for math and her desire to travel, they recommended she become an airdrop loadmaster, a position that would require training at three schools.

Moreover, before they would even let her in, Sheets needed to lose about 20 pounds to meet Air Force standards.

But neither the schooling nor the physical work deterred Sheets from her goal. She started running every day to get into shape, losing about 30 pounds before she officially enlisted.

Once she was in, her dream didn’t become any easier. Along with physical training, Sheets had to learn all the formulas, equations and calculations loadmasters needed to distribute, stow and deliver cargo on an airplane.

“I seriously had no idea what I was getting into,” Sheets said.

In fact, she went to two schools before she realized that loadmasters fly on airplanes with their assigned cargo.

“I got to the third school and they told me, ‘Okay, we’re going to show you your airplane,’ and I was like, ‘What airplane?’ ” Sheets said. “They couldn’t believe I didn’t know.”

The ribbing she got for that oversight was pretty rough, but it was easily forgotten in her excitement. Under the enourmous wings of the C-141 she was assigned to, she forgot all about blue skirts and ribbons.

“It was huge,” Sheets said. “And I was thrilled to death.”

Over the years, that thrill only grew.

Stationed first at McGuire Air Force Base, New Jersey and then Altus Air Base, Oklahoma, Sheets spent more than 2,500 hours in the air during her 13-year military career, both as a C-141 airdrop loadmaster and instructor.

“(An airdrop loadmaster) handles basically anything coming out of the plane,” Sheets explained.

That means she has not only loaded cargo, but launched everything from paratroopers to eight-ton tanks from mid-air.

“Yeah it takes about eight to 16 parachutes for (a tank),” Sheets said.

Some of her other missions included delivering inspectors to Russia for the Intermediate-Range Nuclear Force Treaty in the late 1980s, providing combat assistance in Panama during Operation Just Cause in 1989 and participating in the air-vac of POW Michael Durrant in 1993.

“That was one of my favorite missions,” Sheets said.

On a more regular basis, Sheets’ unit served as a presidential support squadron, loading and delivering presidential limos and secret service equipment to wherever the president needed to go.

Between intense migraines and sleep apnea, she no longer met Air Force health standards and was medically discarged in 2000.

“It was a really tough time,” Sheets said.

Unsure of what to do, she moved to Stanly County with her husband at the time. After working home-sales for a while, she felt the itch to be part of a bigger mission again. So she decided to take up teaching.

Going first to Stanly Community College and then Pfeiffer University, Sheets got her bachelor’s degree in applied mathematics and began teaching in Anson County.

However, just as she was getting that drive back, it got knocked away.

In 2011, not long after going through a divorce, a bad medication caused her to black out and suffer a bad fall. The injury to her frontal lobe affected her memory.

“It completely messed up my math,” Sheets said. “All that stuff I learned, all that calculus, differential equations, I can’t even start to do it anymore.”

And without that, she found herself set adrift once again.

It was a surprise reunion a few years later that helped her find something to refocus on.

Fellow veteran Dave Sheets, who actually served with her back in the 1980s, came to Charlotte for a NASCAR race and decided to come by to visit her, as well. 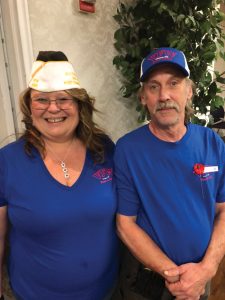 Bobbi Sheets met her husband Dave, right, when he returned to Charlotte for a NASCAR race. (Contributed)

“He’s the reason I got back being active with the VFW,” Bobbi Sheets said.

Sheets had joined the VFW near McGuire Air Force Base back in 1990 after going to Panama, she explained.

“Anyone who’s been in a conflict can join, so I did,” Sheets said.

However, after transferring her membership to Stanly in 2000, she never really went to the meetings.

“I didn’t like being the only female there,” Sheets said.

So when Dave decided to move Stanly and the two started dating, they began going to VFW Post 6365 in Locust together.

“It may have been all men, but it turned out they were all very quick to welcome me,” Sheets said.

Named chaplain, then senior vice commander, then commander, being a part of the post gave her a new mission: supporting veterans and building up local participation.

In fact, in an effort to increase membership, she asked the district if she could host a recruitment table at Charlotte Motor Speedway.

“No (other VFW) had ever gotten a race up there until I suggested that the district try it,” Sheets said.

The event garnered 17 new members for the district, several donations to their relief fund and enough continued interest to host a similar event at the Darlington Raceway later that yaer.

“That membership drive got into the triple digits,” Sheets said. “Some things just take a little gumption.”

And perhaps some things take a woman’s touch in particular, she also found out.

“The more I do this, the more female veterans I find who don’t go to VFWs simply because they don’t see other women there,” Sheets said.

In fact, Post 6365 has a female member from West Virginia who comes simply because she knows there are other women at the post.

“She told me, ‘I don’t mind coming down and staying there a few nights to be with you guys. I just want to be around girl veterans,’ ” Sheets said.

It’s not that those women are uncomfortable around men. Any woman in the military has worked with them her whole life, Sheets pointed out.

In fact, the very name Sheets goes by was a “gift” from the male members of her unit.

About a month in, Sheets insisted that if that was the case, she’d go by Bobbi. With an “i.”

“Everyone’s been calling me that ever since,” Sheets said. “Even my mom.”

Despite being a girl, her male counterparts always respected her, too, she noted. While sometimes they would joke about “giving the girl” a job nobody wanted — like dropping four sequential Humvees out of a plane — it was really because they knew she could handle the tough assignments and trusted her to do it.

“I never really felt mistreated in the military,” Sheets said.

But there are still things that women veterans go through that men don’t understand, she added.

Some are day-to-day stereotypes, like going to the VA Hospital and having the staff assume one’s husband is the veteran. Others are bigger taboos, like reporting some kind of military sexual misconduct.

“It doesn’t matter how strong you are, there are some things you just don’t want to talk about with a man,” Sheets said.

That’s a big reason she’s been so encouraged since becoming active in the VFW.

Over the past four years, Sheets has met a growing number of female members and commanders. There are at least four such commanders in the region, maybe a dozen or so across the state.

“And we have an amazing state commander and vice commanders,” Sheets said. “We can talk to them and know they’ll listen.”

In fact, at one of the state meetings she and another female commander plan to ask for a woman representative at the state level.

“That way that perspective is being heard,” Sheets said. “I think it would be a big step.”

But in the meantime, Sheets plans to keep pursuing her mission at home: Reaching out to veterans in the area and hosting fundraisers for a much-needed new building.

“Our current one only holds about 40 people and we have 43 members,” Sheets said.
And while that may seem like a lot to juggle, Sheets was never one to shy from the tough stuff.