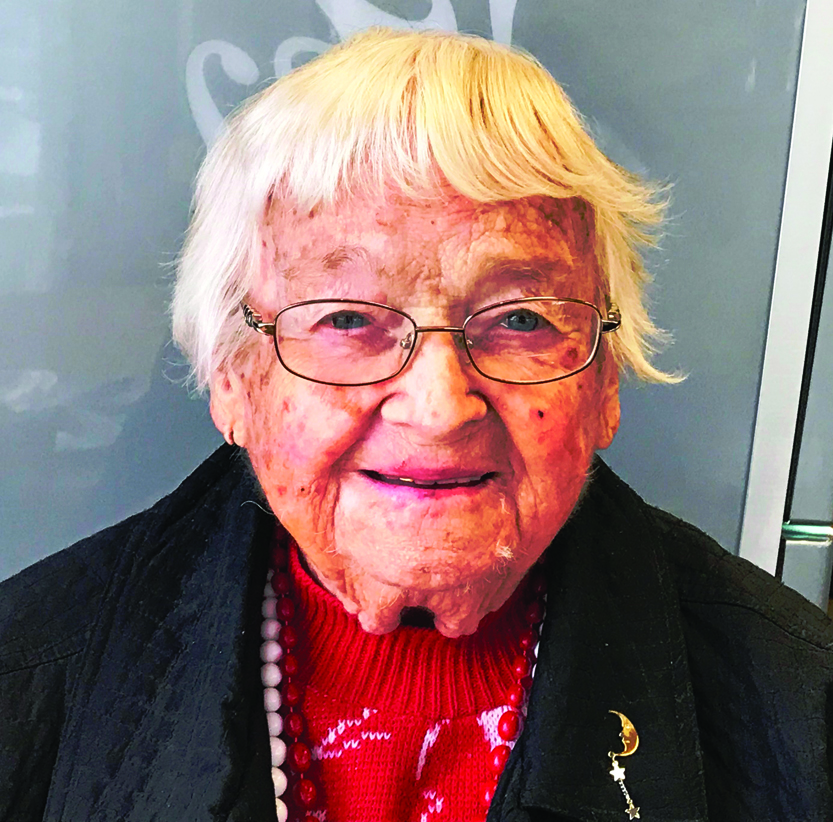 Ruth Coggins has her hands in many activities at 94.

After first earning her driver’s license in 1942, Ruth Coggins has operated motor vehicles for 76 years without so much as a single ticket … although she admits she has probably deserved some.

“I don’t just poke along,” she says, “so I probably should have some tickets.”

Coggins doesn’t “poke along” in other facets of her life, either. The 94-year-old New London native remains more active in the community than many half her age. She actively volunteers for numerous organizations, has traveled to all 50 states as well as the Holy Land, and continues to cook and entertain at her home where she says, “we celebrate every holiday.”

Service has been a way of life for Ruth since her early years, growing up in a family of three girls and five boys along Austin Road in the Plyler community, performing numerous farming chores including operating machinery … except for one item.

“When I was growing up, I drove the tractor and helped around the farm,” said Ruth. “And Daddy even had a bulldozer, but he never would let me drive that.”

“I started volunteering in 1942,” she added. “After I started driving, I would carry a Mr. and Mrs. Russell to and from church every Sunday at Plyler Baptist.”

“I’ve always liked to help people, and nursing seemed like a good way to do that,” she said.

Her parents, however, could not afford the cost, so Ruth, as many in Stanly County did, went to work in the textile industry.

“I started at Wiscassett Mills after I graduated in 1943, and worked there for 44 years,” said Coggins.

But along with her work at Wiscassett came marriage, along with home and family responsibilities.

“My first husband was Craven Burris. After we married, we moved to New London, and joined New London First Baptist Church, where I still go. Later on, Craven developed a heart condition, and I had to care for him until he passed away in 1972,” she said. “At the same time, I was caring for my mother and working at Wiscassett.”

In 1976, Ruth re-married, this time to Raymond Coggins. Meanwhile, she continued to care for her mother until her death in 1988, and eventually for Raymond, until he passed in 1990.

But even after losing her two closest family members, her passion for helping others did not waver. At church, she filled the post of treasurer for 21 years and worked with the children’s program for 20 while having perfect Sunday school attendance for 64 years. In addition, she began volunteering for various local organizations to stay busy and lend a hand.

“I started at the West Albemarle Thrift Store,” she said, “and volunteered there until it closed. I’ve also volunteered at the Clothing Closet, at the Senior Center, and for Hospice.”

At 94, Coggins is unable to stay on her feet for long periods of time, so her current volunteering isn’t quite as active as in earlier years. However, she still donates her time to a number of local organizations, as well as providing care and comfort to patients at area nursing centers.

“I have to do mostly sit-down work now,” Ruth says. “I fold newsletters at the Senior Center, and I provide company for residents at Stanly Manor and Trinity Place by reading and helping out where needed.”

One of the residents Coggins assists regularly is 108-year-old Grace Comer, a Trinity Place resident.

“Grace is hard of hearing, so I try to be there to talk and read to her,” Ruth said. “But otherwise, she does pretty well. She is able to roll herself around Trinity Place in her wheelchair.”

Although volunteering and serving others takes up the lion’s share of her time, Coggins is not one to be shut in at home, and has traveled extensively.

“I’ve been to every state … Oklahoma is the last one I visited. But my favorite state is Hawaii, and my favorite sight is the Grand Canyon,” she said. “I’ve been to the Holy Land twice, I’ve gone on six cruises and have been overseas six times, and once got to walk on the Great Wall of China.”

Ruth’s impact on the community was recognized in 2014 on her 90th birthday, when two parties were given in her honor.

“The first one was put on by my nieces, Brenda Mauldin and Teresa Troutman,” she said. “There were 50 people there, including Elvis. Then, the following Sunday, Carol Almond hosted another birthday party at Friendship Methodist Church. There were 190 people who came to that one.”

Ruth and her two husbands never had children, and all of her brothers and sisters have since passed away. However, she still has “unofficial” family. Although not blood-related, a number of friends and neighbors have “adopted” her, and make sure she is cared for.

An example of just how fine she is doing comes from a few years ago when she decided to give her nieces and nephews, almost all of whom have birthdays in the same month, a limousine tour as a present.

“The limo cost $50 an hour, so we rode all around to several restaurants. We would stop, but I kept telling them we weren’t going to eat yet. Finally, we went to Hardee’s and I bought them a large Pepsi and four straws. They thought I was crazy or cheap or both. Then we went back home. Once we got there, their families were all there and I cooked for and fed all 43 people. It was a great birthday for them.”

So just what keeps a 94-year-old volunteering, driving, cooking and entertaining, one might ask?

“I just want to be good to people,” says Ruth.