CAROLYN’S ANGELS: 7 months later, woman has many reasons to be thankful 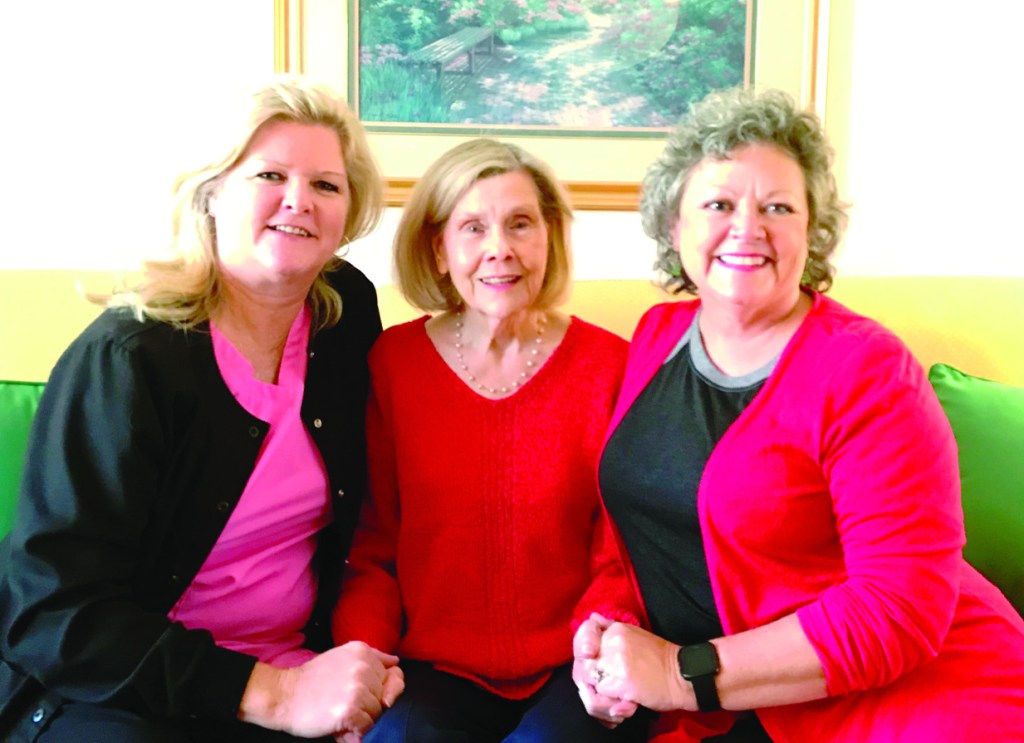 Contributed Carolyn Hathcock, center, is surrounded by her “angels,” Michelle Boone, left, and Christy Crisco. Boone and Crisco are credited with helping Hathcock in a medical emergency until emergency medical personnel could arrive.

Thanksgiving is meant to be more than a holiday. Actually, in its truest sense, it is a lifestyle.

Although many view the November observance as little more than an excuse to eat and watch football, there are some who, through personal experience, have gained special insight into the meaning of the season.

This includes a group of people for whom both the word and definition of “thanksgiving” holds special significance this year because of an event seven months ago.

On this day, as she had done for some 15 years prior, Carolyn Hathcock was taking part in the annual Uwharrie Senior Games (USG).

Having always been active, the program offered her an opportunity to remain so along with old friends and new acquaintances.

Early that afternoon, she was participating in a bocce match at Rock Creek Park. It was then that her world changed drastically.

“What I remember is that I was in the middle of a bocce match,” she said. “I stepped into the bocce court to roll a ball and that’s the last thing I remember before waking up at the hospital in Charlotte.”

The fact that Hathcock did wake up is due in large part to two other USG participants, to whom she has since assigned the title “Carolyn’s Angels.”

As activity director and wellness coordinator at Spring Arbor of Albemarle, Christy Crisco was present at Senior Games that day in a dual role. Not only was she responsible for shuttling residents to and from the events, she was also in her first year as a games participant herself.

Michelle Boone, a resident assistant at the facility, was helping Crisco with her duties, and was also in her initial year of USG participation.

“Michelle and I had finished our scheduled bocce matches and we were ready to leave,” said Crisco. “In fact I had mentioned to her that it was time to go.”

“Christy’s a workaholic,” said Boone, “so I told her to just chill out and let’s stick around a little while. So we started a match on the opposite end of the court from where Carolyn was playing.”

Whether the choice to stay was coincidence or providentially guided may be debated by some, but there is no doubt in Crisco’s mind as to the source of the decision.

“We stayed,” she said, “and God intervened … He kept the two of us there for a reason.”

At the east end of bocce court 2, Carolyn was in the third frame of the bronze medal match for her age division when, without warning, she collapsed onto the gravel surface.

Some present at first thought she had tripped over the court’s sideboard, but when it was discovered that she was unconscious, the gravity of the situation quickly became evident.

“The doctors told me I went into cardiac arrest,” said Hathcock. “I had been dealing with ventricular arrhythmia, and had my first heart surgery back in 1982. But I had never passed out before … ever.”

Within seconds, Crisco and Boone were in action. As part of their jobs, both Spring Arbor employees are certified in cardiopulmonary resuscitation.

“But I had only used it one time before,” said Crisco.

Nevertheless, after checking for and finding no pulse, Crisco began chest compressions while Boone monitored Hathcock and maintained an open airway.

Meanwhile, USG Coordinator Oliver Webster of Albemarle Parks and Recreation was on the phone, first to 911 and immediately afterward with the parks department office to have

Hathcock’s registration form, which contained her medical history and information, retrieved in preparation for use by medical staff.

“It seemed like we were doing compressions forever,” said Crisco.

But in fact, Albemarle Police, Albemarle Fire and Stanly County EMS were all on site within minutes. Close behind was Cindy Burris of Albemarle Parks and Recreation with a copy of Carolyn’s medical history summary.

Fire and EMS personnel used an external defibrillator which restored Hathcock’s heartbeat, after which she was transported to Stanly Regional Medical Center and eventually to Carolinas Medical Center in Charlotte. But the care provided by Boone and Crisco in the seconds and minutes immediately following the heart stoppage was key to her survival, according to medical personnel.

For the 20 or so USG participants present, the atmosphere at the event went from festive to somber.

“Obviously, it shook up everybody there,” said Boone.

As she was transported by ambulance, those participants remaining at Rock Creek gathered in a circle to pray for Hathcock’s healing, for her family’s comfort and for wisdom and guidance for the doctors who would be treating her.

Boone and Crisco, whose response and expert administration of CPR could be considered nothing short of heroic, were among those in the prayer circle. But anyone directing praise to them immediately saw it deflected upward.

“Sometimes we question why things happen the way they do,” Boone said, “but I know now that I was where I was supposed to be … God used us that day.”

“He took over and worked through us,” added Crisco. “All praise goes to Him.”

Since she was unconscious, it was imperative that a family member be located. Albemarle Parks and Recreation’s Burris, who had retrieved the medical information summary, stepped up to handle that responsibility, and reached Carolyn’s husband, Ed, who was running errands in Albemarle at the time.He headed immediately to the emergency department.

Medical staff at Stanly recommended Carolyn be transferred immediately to the cardiac unit at Carolinas Medical Center in Charlotte. As doctors prepared her for the helicopter flight to Charlotte, Ed sat in a private waiting area accompanied by Burris and others who had been at the bocce court. Boone and Crisco were among those present with him.

“Ed was very calm and composed, much more than I could have been,” said Crisco.

“He said he was going to drive to Charlotte while they transported Carolyn,” said Boone. “I offered to drive him over, but he refused.”

After her flight to Charlotte, Carolyn was subsequently transported to Duke Medical Center in Durham. A few days later, surgery was performed to install a pacemaker/defibrillator. And after only eight days of hospitalization, she returned home to Norwood for rest and recuperation.

Time, work and family responsibilities have a way of easing us back into everyday life, even after shocking, distressing or nerve-wracking experiences, and Boone and Crisco soon had returned to their everyday duties at Spring Arbor. But in mid-May, Christy was paged during a regular shift.

“I picked up the phone, and someone said ‘Hello, Angel,’ ” said Crisco. “I didn’t know who it was at first … all I could think of was the old TV show ‘Charlie’s Angels,’ but I soon figured out it was Carolyn calling to say hello and thank us. That brought tears to my eyes.”

A few days later, Michelle and Christy were paged and told they needed to go outside and meet someone in the parking lot.

Sitting outside the facility in their car were Ed and Carolyn.

“We were speechless just to see Carolyn sitting in the car smiling,” said Crisco. “The last time we had seen her, she was on the ground. It gave me goosebumps.”

“There is no telling how many people Carolyn has touched since then,” added Boone. “God saved her for a reason.”

And as the visit was ending, Ed, a man of few words, took a moment to speak to Crisco and Boone.

“Thank you for saving the love of my life,” he said.

“All I could think of was, what a blessed lady Carolyn is,” said Michelle.

“You all don’t know how much I thank God for you,” said Carolyn. “You two (Christy and Michelle) were my ‘angels unaware,’ ” she said, in reference to Hebrews 13:2. “God brought the three of us together at the right place and the right time, and it is through God’s grace that these angels, Christy and Michelle, who were present, and the prayers of many others, that I am a living example of God’s greatest blessing,” said Carolyn.

Writer’s Note: The fact that you are able to read this account — or that it is written at all — is likely due to the influence of a teacher at some time in your life. For me, that educator is Carolyn Hathcock, my second-grade teacher at Norwood Elementary School during the 1964-65 school year.
Mrs. Hathcock (it’s been 50-plus years and I still have trouble calling my former teachers by first name) helped instill in me a love of reading and writing that continues to this day. As a matter of fact, the writing part has morphed into a nice post-retirement avocation.