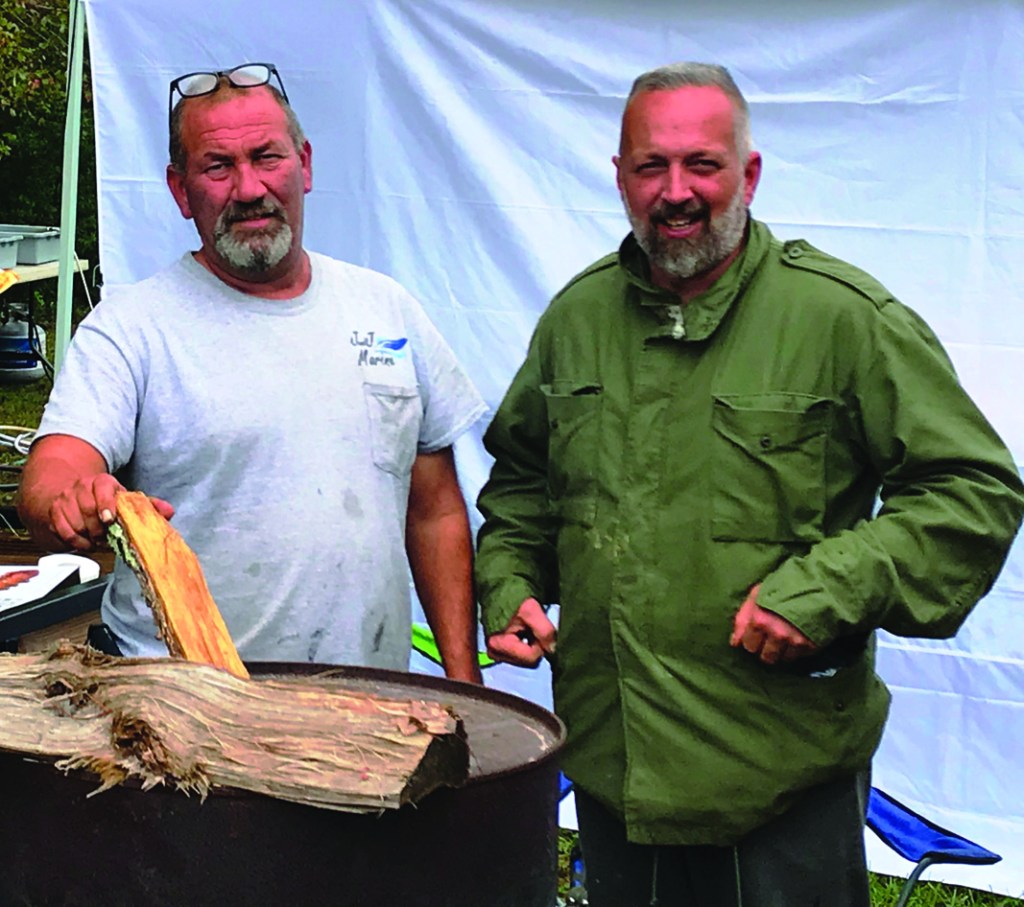 Photo by TOBY THORPE Jody Sides and Rodney Morton of Slick Bones BBQ, Locust, say they are “old school” in that they use hickory wood from a fire barrel to cook.

The smell of hickory smoke and sizzling meat filled the air as Live Again Ministries conducted its fourth annual BBQ Cook Off at Locust Town Center.

Cooking teams from as far away as Fayetteville rolled into Locust a day early to set up for all-night “low and slow” cooking in preparation for the competition phase of the event.

“The competition consists of two parts,” said Blaire Singleton, a co-leader of the event planning team. “The first is a judged competition in which a panel of judges rates each team’s barbecue on set standards using a blind format. The second is a people’s choice award, in which customers of the festival (who purchase wrist bands which give them the privilege of sampling each team’s product) vote for their favorite team.”

According to Singleton, there are three categories of competition: pork, chicken and ribs. Trophies and cash awards go to winners in each category, as well as a “grand champion” award, which goes to the one team that finishes highest in the three categories combined.

In addition, a number of vendors provided non-barbecue treats and souvenirs. Face painting, a bouncy house and treat bags were offered for youngsters. A car and motorcycle show attracted two- and four-wheel enthusiasts, while a bake sale, a 50-50 raffle and a raffle for a Traeger grill provided opportunities for visitors to test their luck while indulging their palate. And throughout the event, live music, provided by the Mitch Hayes Band and the Valhalla Band, was performed from the back porch of Locust City Hall.

But the main attraction, the barbecue, saw a constant stream of visitors with styrofoam plates in line for samples at each cooking tent as pit masters offered their best creations to those in attendance.

Alan Taylor, of Delta Boys BBQ , was a first-time participant.

“I’m a Memphis native, hence our name,” said Taylor, who now lives in Oakboro and works for Goodyear as an operations manager.

Taylor describes his cooking as a “fusion of Memphis and Carolina barbecue,” noting that he got his start during his days in the military.

“It’s just a hobby now, and we are testing the waters,” he said, “but we may expand in the future.”

Larry Burgess, also of Oakboro, operates Q and Stew Best Ever BBQ, and has participated in the festival each year.

Locust-based Slick Bones BBQ is also a four-year participant in the event. In addition, their cooking style is “old school” compared to many of the participating teams.

“We are the only group here that cooks with hickory wood from a fire barrel,” said Jody Sides, who along with Rodney Morton, Terry Waller and Terry Rummage make up the team.

“The others use gravity-fed cookers, so they can get some sleep while cooking,” said Sides, who noted that his team set up at lunchtime the day before, and had cooked all afternoon and all night through a cold and sometimes heavy rain.

Brian Penrod, of Bud Wiser’s BBQ of Fayetteville, had the longest road to the event, both in mileage and time. 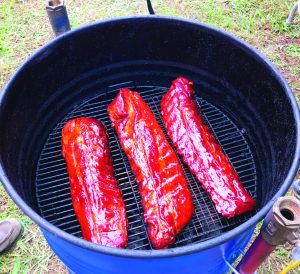 “My truck broke down on the way here,” he said. “I had to have my teammate (Danny Vanorden of Troy) come pick up the trailer and pull it here.”

Although those visiting the event may focus on finding the best food, and those participating in the event may dwell on winning the cooking competition, the true winners of the event are the ministries benefitted from the funds and support raised.

This year, all proceeds from the event will go to Live Again Ministries’ TRIBE program. TRIBE is an after-school program for teens in need of academic and social assistance, and is currently offered at West Stanly Middle School and West Stanly High School, with hopes of future expansion.

Miranda White, a TRIBE graduate, gave a first-hand account of the academic, social and emotional differences that she experienced as one of the program’s first participants.

“I was a mess coming into the program,” said White, a current Stanly Community College student. “Life at home was not good, my grades were bad, and I didn’t have anyone to talk to. The program gave me a place to go where I was able to make new friends. It helped me to actually be in a class with other kids who were in similar situations.”

“There are lots of kids who don’t have a good home life,” she added. “I came a long way because of this program, and others can, too.”