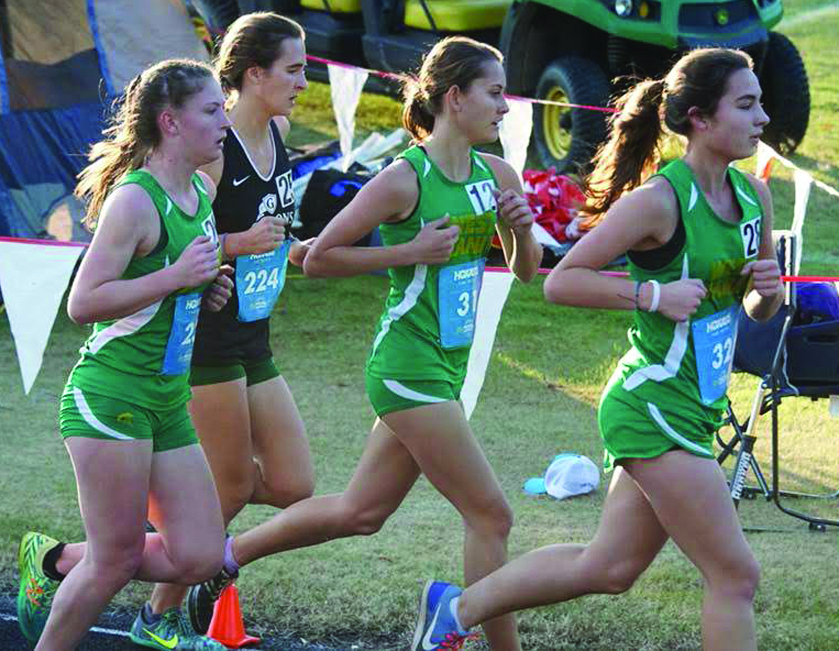 For the seventh year,  Reagan High School in Pfafftown hosted the Dash for Doobie 3,200-meter race. Dash for Doobie is a charity fundraiser for a scholarship that celebrates the life of former Reagan runner Nick Doub who died in a single car accident in January 2011.

The race provides an excellent opportunity for distance runners coming off cross country to run personal records for the two-mile distance. Many of the runners compete in hopes of reaching the qualifying standard for the indoor state championships.

It was the perfect setting for 10 of the West Stanly Colts distance runners as a record 550 runners were split into 19 heats, seven for the women and 12 for the men.

Senior Pierson McManus and freshman Natalie Almond might have been the last two Colts to race, but as the two stepped to the line the sun set dropping the temperature into the low fifties, which was perfect for racing.

The tendency in every heat was for runners to start faster than they realized. McManus used her experience going to the back of the pack of 31 women and sticking to a pre-race plan of splits set to break the 13-minute 1A/2A state qualifying standard. McManus ran a strong race hitting the first mile in 6:17 and a second mile in 6:19 for a 12:36 time. The senior passed runners throughout the second mile to qualify for her third state indoor state championship, while just missing a personal record by seven seconds.

Freshman teammate Almond was equally impressive in her first track meet racing to a 12:51 time. The time will allow Almond to join McManus in the state championships, an accomplishment in her first career track meet.

Senior Brooklyn Simpson was close to making it three Colt qualifiers. The much-improved senior dropped her personal best by 29 seconds racing to a 13:09, missing the qualifying mark by nine seconds. Her time was better than last year’s qualifying standard, but the NCHSAA lowered the standards this year.

Running in the first heat of women were senior Maddie Miller, junior Katherine Pollard, and sophomore Rachel Efird. The trio got out a little quicker than they planned but all three held on to run personal records. Efird showed she is much more at home on the track, sprinting to a 13:39 time with Pollard one second back in 13:40. Miller who was racing four times longer than her normal track event ran 13:52.

The Colt men got the day started with junior Daniel Brattain and freshman Blayne Morton racing in the first heat. Brattain showed a lot of early season strength with a 11:54 time only 11 seconds off his personal best. Morton demonstrated a lot of promise racing in his first career track meet to a solid 12:11 time.

Sophomore Austin Huneycutt continues to improve dropping his personal record by 17 seconds to 11:36.

The fastest time for the Colt men came from senior Noah Almond racing in the second heat. Almond used his experience like McManus going to the back of the pack and sticking to his pre-race splits. The senior moved up through the pack throughout the race to run 11:18 exactly a minute better than his previous best.

Many of the Colts will be competing in the upcoming South Regional Footlocker Meet.