WOMEN’S SPOTLIGHT: Caring for families near and far 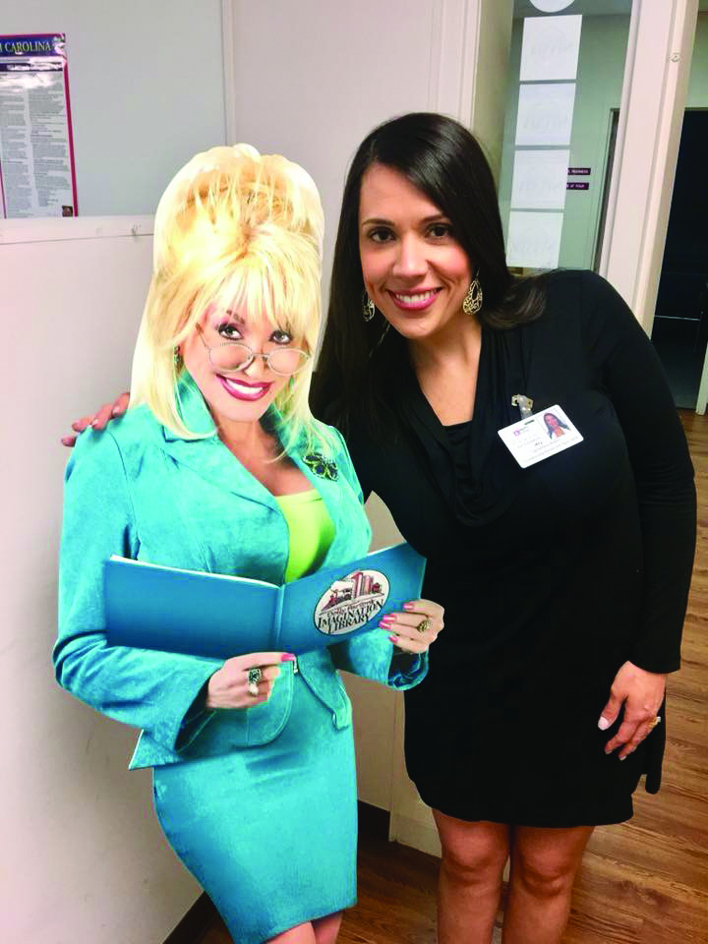 Contributed “Iggy” Austin, right, discusses how the Dolly Parton Imagination Library program plays a role in the education needs of children under 5.

“Always a bridesmaid never a bride,” could not be said for Igmaliana Nunez Austin and her two sisters from Venezuela.

Online matchmaking got everything started when one of the sisters met a man from North Carolina. When that couple married, “Iggy” Nunez traveled to Charlotte from South America for the wedding and was introduced to a man born and raised in Oakboro.

The next summer, Iggy was invited back for a lengthy visit with her sister and brother-in-law. The matchmaking began in earnest. After two years of long-distance dating Iggy was married, and another sister, serving as her maid of honor, met and eventually married one of the groomsmen. Three sisters, three weddings and far away from home were they.

“I come from a very united family, so leaving my family was definitely the biggest adjustment I faced when I moved to the USA in 2004,” said Austin.

From Maracaibo, the second largest city in Venezuela, to Oakboro, a one-stoplight town, was also a challenge for Austin.

Even so, she tells of the support of her sister who lived in Charlotte and the wonderful people, like her mother-in-law, who made the transition easier for her. Austin also sings the praises of Mineral Springs Baptist Church where she felt welcomed from the first day she walked in.

Though Austin studied human resources in college, before immigrating to the United States, she taught English as a Second Language (ESL) in a Christian school in Maracaibo. She began her own language studies as a 10-year-old with ESL classes and at an after-school academy. Language skills helped make a way for her in her new country.

“English is a universal language and will open many phenomenal doors and new opportunities,” says Austin. She believes everyone in the world should learn it.

After moving to the States, Austin worked in a Charlotte agency that provided services for adults with mental health needs. When her first child was born, she stayed home for a year. Then Austin received a call to serve as a bilingual parent-educator in a program known as Parents as Teachers.

“With great honor I accepted the job at the Stanly County Partnership for Children, though I had so much to learn because I didn’t know the community or the resources available here,” Austin said. “I didn’t realize there were so many Hispanics in the area. I had the chance to learn about these beautiful families who are doing the best they can to support their children.”

The Partnership serves children up to 5 years of age, and Austin’s position took her into homes monthly or bi-weekly in order to encourage parents to think of the importance of their role as the first teacher for their children. She soon discovered more pressing issues among her clients.

“Basic, basic needs must be met first before parents can think about being good parents, good educators,” says Austin.

She worked with a caseload of about 30 families over an eight-year period beginning in 2008.

During that time, Austin was told she needed to become a certified technician for National Child Passenger Safety and is now coordinator of the program. As such, she is an active member of the Safe Kids Coalition in the county.

“I’m the buckle-up coordinator now. We try to keep our children safe. We can help install or even supply a car seat if needed. Our permanent checking station is open twice a month on Bethany Road for families to get the car seats checked.”

Austin admits she learned that her own child’s car seat wasn’t installed properly.

“I thought I’d done it right, and now I love to share knowledge with parents, and providers who may even be grandparents,” she says.

Austin has served in Stanly County for 11 years at Partnership for Children, a state-funded agency with many programs for young children and their families. It is in charge of all licensed day care centers in the county and are the administrator for the North Carolina pre-K program locally. It also offers an adult basic skills class as well as ESL classes at the offices of the Partnership, according to Austin.

Literacy is another major emphasis of the Partnership for Children. Austin partners with Albemarle Pediatrics in a program called Reach Out and Read. When a child from 6 months to 5 years old comes for a well-checkup, the pediatrician “prescribes” and furnishes a book at each visit.

“It’s like, serious, and presented by the physician,” she says.

Children in two local day care sites participate in another program where a bag of books is sent home weekly, then returned.

Most of these programs are free, including an adult literacy class which uses children’s books to increase reading comprehension for adults, and to improve writing as well. This program consists of 20 hours of instruction in ESL. Participants receive a gift card when they graduate.

Dolly Parton may be the most recognized name in children’s literacy programs because of her Imagination Library.

“This is a fantastic free program for children under 5 years old. Dolly’s organization mails a book monthly to each child who is signed up,” Austin says.

Yet, when it comes to local recognition, Iggy Austin might just have Parton beat. During her 11 years working at the Partnership for Children, she has taken on an informal role in the community, especially within the Hispanic population.

Her feelings for families runs deep.

“I’ve had the same cellphone number for years and most calls have nothing to do with my work. They’re looking for someone they can trust, who speaks the language, knows about resources, and just to know somebody cares,” says Austin.