Platte Boyd Moring, Jr., 90, of Myrtle Beach, SC passed away peacefully at his home on Wednesday, November 21, 2018.
Platte was born September 27, 1928 in Huntington, West Virginia to the late Platte Boyd Moring, Sr. and Lota Couk Moring.
He was an Eagle Scout and Veteran of the United States Army with service in occupied Germany after World War II. 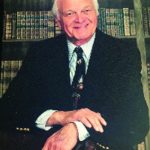 Platte graduated from the University of North Carolina at Chapel Hill with a Bachelor of Science degree in Chemistry and continued his education following military service at North Carolina State University earning a degree in textile chemistry.
Platte married Helen Burt Mauney in 1956 in New London, NC and started his career as a textile chemist with Burlington Industries.
He enjoyed being with people more than working in the laboratory so Platte became a regional sales manager for several textile companies and relocated his family to Allentown, PA.
Upon the death of his beloved Helen in 1985, Platte moved to Myrtle Beach, SC and resided at Kingston Plantation where he enjoyed tennis as a “super” senior.
His beachfront home served as the gathering place for many family reunions and good times. Platte will be missed greatly by his family and friends for his gentlemanly manner, zest for life, and his enduring values of honesty and integrity.
Mr. Moring is survived by his son Lieutenant Colonel (ret.) Platte Moring, III, and wife Susan Moomaw Moring of Allentown, PA; daughter Lota Hahn and husband Dr. Stephen Hahn of Houston, TX; grandchildren Leigh Moring, William Moring, Christopher Hahn, Emma Hahn, Robert Hahn, and Caroline Hahn. He was preceded in death by his five sisters, Martha, Betty Ann, Mary Jane, Joan Ellen, and Judy.
A service to celebrate Platte’s life will be held at 11:00 a.m. on Wednesday, November 28, 2018, at Highland Baptist Church in New London, NC. Platte will be interred next to his wife immediately thereafter in the New London Cemetery, followed by a lunch reception at the church.
In lieu of flowers, contributions in Platte’s memory can be made to the Disabled American Veterans, at dav.org.
Stanly Funeral and Cremation Care of Albemarle is serving the Moring family.