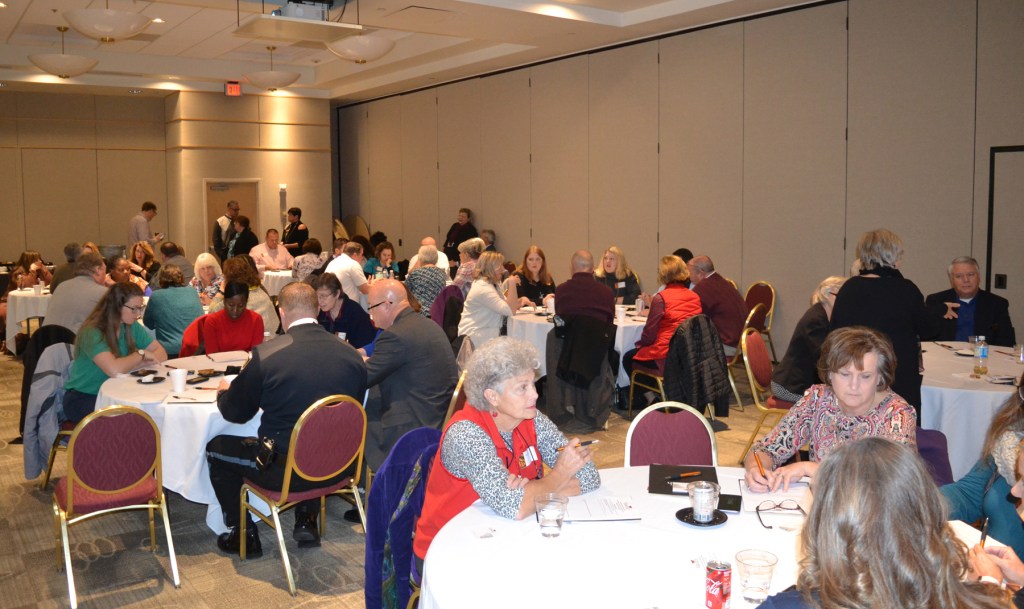 On behalf of Monarch, community stakeholders brainstorm about how to reach under-served populations in need of services related to mental health and substance use disorders during a Wednesday morning presentation.

Peggy Terhune, president and CEO of Monarch, speaks at a program Wednesday morning.

“We’re the only one in North Carolina to receive this grant,” said Peggy Terhune, president and chief executive officer for Monarch.

Along with expanded services, the grant will fund 13 new positions, including case management staff that will allow for increased client interaction and integration between support agencies.

“That’s what I’m most excited about,” Terhune added.

The presentation at Carolinas Healthcare System – Stanly revealed data showing the county in need of greater mental health resources. According to the statistics, 9,628 county residents, or 1 in 5, have some form of mental illness, which includes addictions. There are 2,407 with serious mental illness. Some 5,776 of those with mental illnesses did not receive services the previous year.

Monarch officials insist addiction is a form of mental illness.

Because of the new grant, Monarch will be able to provide more addictive and mental health services. As many as 2,000 residents will be impacted from those added services, which will include evidence-based therapy, or methods “proved to work,” Terhune said.

The county’s youth will be among those targeted for increased services. Plans are underway to teach more teenagers how to handle life’s disappointments and setbacks, instead of them turning to drugs as an escape.

Teens who choose drugs tend to suffer from arrested development, or the stoppage of physical and/or psychological development.

“If we can address their coping skills, other things will fall into place,” said Delton Russell, specialist with Cardinal Innovations Healthcare and former addict, about efforts to prevent teens from drug abuse.

A program exercise called on stakeholders to brainstorm on how to improve mental health for kids and teens. Along with teaching them life coping skills at school, suggestions included engaging the county’s youth with more events where they can share activities with peers as well as increased diversity interaction.

Other questions involved how Monarch could reach additional under-served populations, such as Hispanics, veterans and homeless.

Besides engaging community stakeholders, Monarch used the gathering to recruit volunteers for an advisory committee to assist with its expanded services.