Morrow Mountain State Park hosted its annual Old Fashion Day celebration recently with exhibits and vendors set up in the park’s main picnic area, as well as tours and activities in other areas of the park.

Old Fashion Day is an event focused on trades and historical education of the 1800s and early 1900s, specifically that of the Morrow Mountain area, and has been going on since around 1990, according to Park Superintendent Jeff Davidson.

“The Old Fashion Day event highlights the history, heritage, and culture of the area,” he said, and noted around 30 vendors and exhibitors were participating in this year’s event.
In turn, the vendors, exhibitors and activities attract multitudes of visitors to the park.
Davidson estimated that by day’s end, some 7,500 to 8,000 participants would have come to the park for some or all of the event. 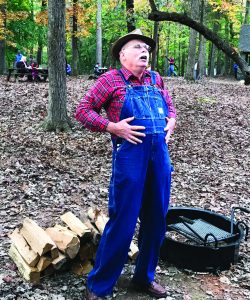 Photo by TOBY THORPE
J.A. Bolton rares back with a story at the Old Fashion Days event at Morrow Mountain State Park.

“Two years ago, we had around 8,000 visitors on Old Fashion Day, and today’s crowd is similar,” he said.

While a number of exhibitors offered items for sale, just as many were informational or instructional in nature.

Most exhibits featured demonstrations and information on the self-reliant lifestyle of the men and women of the 19th century. These included wood carving, rope-making, blacksmithing and cider-making, among others.

Other displays offered visitors an opportunity to try their hand at various activities, including candle-making, various children’s games of the era, and music-making.
Marshall Thompson, a native of Robeson County, was one such exhibitor. Thompson, who displayed hand-built dulcimers, also offered anyone interested an opportunity to learn to play the old-time string instrument. 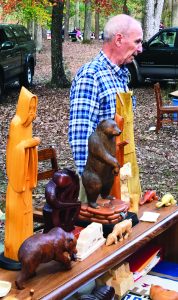 Photo by TOBY THORPE
Norm Bickar of New London can be found at Old Fashion Day and other events with the various items he carves from wood.

“This is my third year here,” said the 86-year-old Thompson, a retired high school science teacher, who learned to play dulcimer after his wife gave him one for his birthday.

“After I learned to play, I got into building them,” he said. “It’s been an enjoyable pastime.”

In the picnic area, story teller J.A. Bolton of Rockingham enthralled children and parents alike with tales of all kinds, and members of the North Carolina Falconers’ Guild allowed visitors an “up close and personal” view of the stately fowl. Other activities included tours of the Dr. Francis Kron homestead, as well as a Civil War re-enactment.

Most North Carolina State Parks hold similar events during the year, said Davidson, but the Old Fashion Day at Morrow Mountain is larger than most.

“When this event first started back in the early 1990s, it was held at the park lodge,” said Davidson. “After a while, it had grown to the point that we had to move it to a larger area.

Now, our event here is one of the best attended in the state park system.”