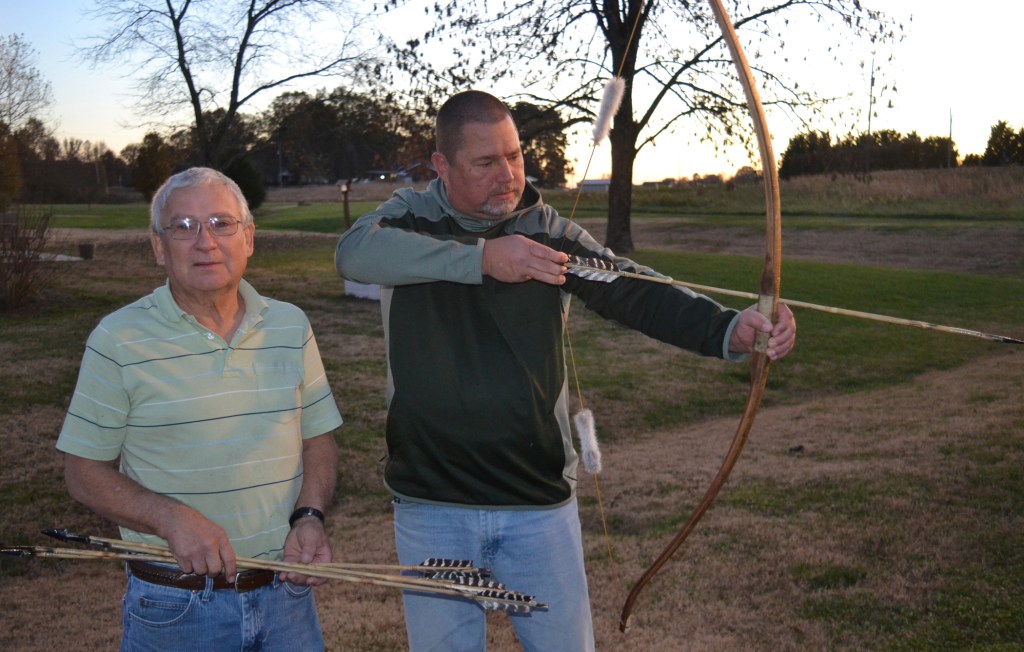 Mike McRae, left, and son Keith show off their handcrafted bow and stone-pointed arrows. Mike crafted the bow and arrows similar to Native Americans. Keith has already harvested two deer with the creation.

A true sportsman believes in keeping the playing field all natural.

For a father and son duo, that’s exactly how they approach deer hunting. So Mike McRae decided he would handcraft a set of bow and arrows in time for son Keith to take advantage of this year’s rutting season.

In order to accomplish the task, Mike decided to emulate a process consistent to the Native Americans who first inhabited this area. Per his research, Mike wanted to copy the works of Eastern Woodland Indians.

“I wanted to make it as authentic as the Indians used,” said Mike, of Albemarle. 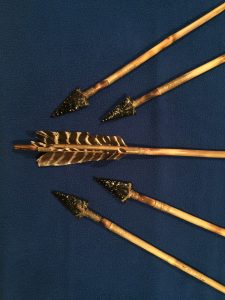 These handcrafted arrows are made of river cane, stone points and turkey feathers.

An avid collector of arrowheads, Mike, 69, had been knapping them for about 35 years.

The shafts for Keith’s planned hunt are made from river cane gathered at Island Creek.

The arrowheads were made of sharpened obsidian, or volcanic rock. Hide glue and sinew from deer ligaments secure the stone-pointed arrowheads.

Turkey feathers rounded out the fletching used to stabilize the flight of the arrow.

Construction of the bow demanded greater effort, not to mention trial and error.

“It took 23 tries to make a strong bow. I even hate to say that,” Mike professed. “They broke in different places.”

They also consisted of an array of woods: hickory, red oak, black locust and red cedar.

His last failure proved to be the hardest. After crafting what appeared to be the perfect bow in time for this season’s rutting, the bow slipped and fractured during the tillering process.

“I cried over that one,” Mike admitted while hanging his head.

Tillering is what turns a stick of wood into a bow with the objective to bend both limbs evenly for the desired shape and draw weight, all without breaking it. 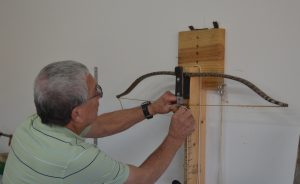 Mike McRae demonstrates the process of tillering, using a handmade bow with rattlesnake skin created for his great grandson.

His family assumed the pursuit of the perfect bow had ended.

Mike kept thinking about Keith wanting to harvest a deer with dad’s handcrafted bow and arrows.

“I knew Keith was disappointed,” Mike said. “You can’t let your kids down.”

No longer a fan of hunting with a rifle, Keith prefers to make it more challenging.

“The harder you make it, the more sport is in it,” Keith, 50, said. “I don’t know how to make this more of a sport unless you give the deer a bow.”

Seemingly defeated, Mike decided to learn from his earlier mistakes and give it another go.

“I was doing some things I shouldn’t have been doing,” Mike concluded of prior efforts.

For one, he realized a stronger bow needed to be longer to withstand the pressure.

While a shorter one could fling arrows just fine, Mike wanted to craft a bow that would generate enough power and arrow velocity to harvest a deer.

Into nearby woods, Mike collected a branch of cedar, which he shaved into the bow. Just below the bark where the cedar turns white is where the wood is strongest. Its belly consists of cedar’s traditional red.

Steaming the cedar softens the wood for better manipulation. Again with sinew, rawhide and glue, Mike finally yielded a successful bow about a week into rutting season. 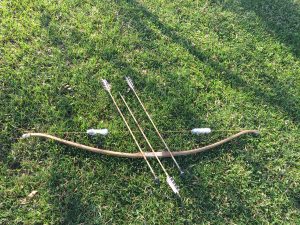 Mike McRae handcrafted a bow and arrows, shown, for his son to use for hunting.

Then on Nov. 20, armed with his father’s handmade weaponry, Keith harvested his first deer. He notched his second on Thanksgiving Day.

“It might fly to pieces tomorrow, but it did what it was supposed to do,” Mike said proudly.

Neither Mike nor Keith can find any wildlife documentation where anyone has harvested a deer in the state with a handmade bow and arrows.

“Maybe only a handful in the U.S.,” Keith suggested.

“Not many people can say they killed a deer with a homemade bow and a stone-pointed arrow,” Mike added.

Not yet finished with his hunting feats, Keith hopes to add to the rare accomplishment.

“My goal is to get a turkey in the spring,” Keith said.

Along with the countless failures of making the ideal hunting bow, Mike managed to handcraft two others, albeit smaller, for his great-grandsons.

They’re made of hickory and sinew, both adorned with rattlesnake skin.

“I want to be an Indian when I grow up,” said a wide-grinning Mike.