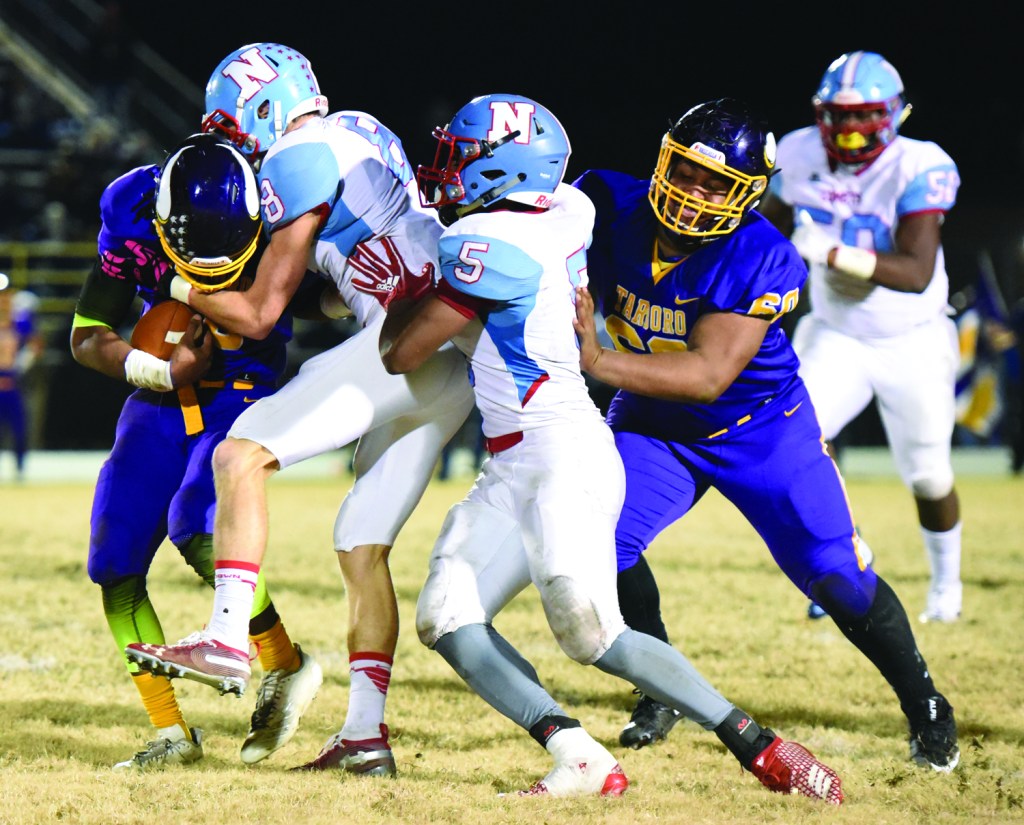 The North Stanly Comets’ record-setting 2018 football season ended Friday night on the road in a 28-0 loss to the No. 1 seeded Tarboro Vikings.

North (11-3) was limited to 100 net yards of offense and five first downs, suffering the program’s first shutout since the 2013 season. North’s offense was also 0-of-8 on third down conversions in the game.

Damon Rhone Jr. led the ground game for the Comets with 63 yards on 11 carries. Cameron Davis added 41 yards on nine carries, finishing with a career total of 6,136 rushing yards. Davis wrapped up his career with a school record of 96 touchdowns, including 92 rushing TDs. As a team, North had 85 net yards on 23 carries.

Comets quarterback Bailey Baker was 5-for-11 in the game through the air for 15 yards and two interceptions.

Tarboro (13-0) finished with 325 net rushing yards in the game on 50 carries. C.J. Joyner led the Vikings with 109 yards on 10 carries and one touchdown. Jaquez Edge added 92 yards on 20 carries with a touchdown and Jyron Albritton added a late touchdown.

Tarboro took the opening kickoff and marched 75 yards downfield in 10 plays, capped by a five-yard TD run from Joyner. The extra point put the Vikings up 7-0 with 7:42 left.

The Vikings put another scoring drive together late in the first, marching 79 yards in 10 plays. Jaquez Edge scored from two yards out, extending the hosts’ lead to 14-0.

North drove down to the Vikings 49, but Baker was picked off at the 16 by Kendarius Jenkins.

A second turnover by the Comets, a lost fumble, set up the Vikings’ third touchdown. Quadarius Pitt dropped a wide-open pass for Tarboro on the opening play of the drive. The Vikings recovered, gained two first downs, then pulled a play deep out of the playbook when Keon Caudle connected with Marquez Edge for a 40-yard halfback pass for a touchdown. The extra point put the Vikings up 21-0 with 4:42 left in the half.

North appeared to lose the fumble on the ensuing kickoff but the referees gave the ball to the Comets. The visitors went three-and-out, but North’s defense came up big.With the Vikings down to the Comets 27, McDaniels was picked off by UNC commit Drew Little, returning the ball to the 34.

The Comets drove down to the Vikings 36 but fumbled on the final play of the half, leaving the hosts up 21-0.

North got the football to start the third quarter and avoided disaster early. A pass which appeared to go backwards and was returned for a touchdown by the Vikings was overruled. Referees determined a penalty prior to the snap negated the turnover. The Comets punted the ball back to the Vikings.

Tarboro possessed the football for the majority of the third on a seven-minute drive which did not produce points.

North was forced to punt on its second drive of the second half and Garrett Clark pinned the Vikings down at the Tarboro 2. Tarboro answered with a 98-yard five-minute scoring drive on eight plays, including a 52-yard run by Joyner. Abrittner’s touchdown with 8:21 left in the game put the Vikings up 28-0.

The Comets looked to avoid the shutout with North’s longest foray into Vikings territory on North’s final sustained drive of the game. Cameron Davis converted on a fourth down and Rhone gave North another first down. The drive ended when Baker was picked off in the end zone by Caudle.

“We knew this team was going to be tough. We knew they were going to run it down our throat; we gave a little bit the first half, but the second half we came back and played the way the Comets play,” North head coach Scott Crisco said. “Our defense played hard, but we just couldn’t get anything together offensively.”

“From the moment I flipeed on the film…I said, ‘Boys, we are playing a really good football team,’ ” Tarboro head coach Jeff Craddock said. “Right away, we tried to get our mindset to grind…let’s pound the fullback up. Let’s try to soften them up and give it to our halfbacks, try to catch them. We executed our game plan well.”

Tarboro’s coach said “the other part of the plan was to keep that high-powered offense off the field.”

The Comets graduate 17 seniors from this team, including three players each going over the 1,000-yard mark in their respective categories: Baker, Davis and Rhone.

Crisco reflected on the team’s season, setting a North Stanly school record for wins in a season while also making him the winningest coach in Comets history.

“Adversity was on this team the whole year: weather, injuries, the way the playoffs rolled out. This team never batted an eye; they just strapped up and said, ‘Let’s go play.’ That’s what I wanted them to learn, not just in football but in life,” Crisco said.