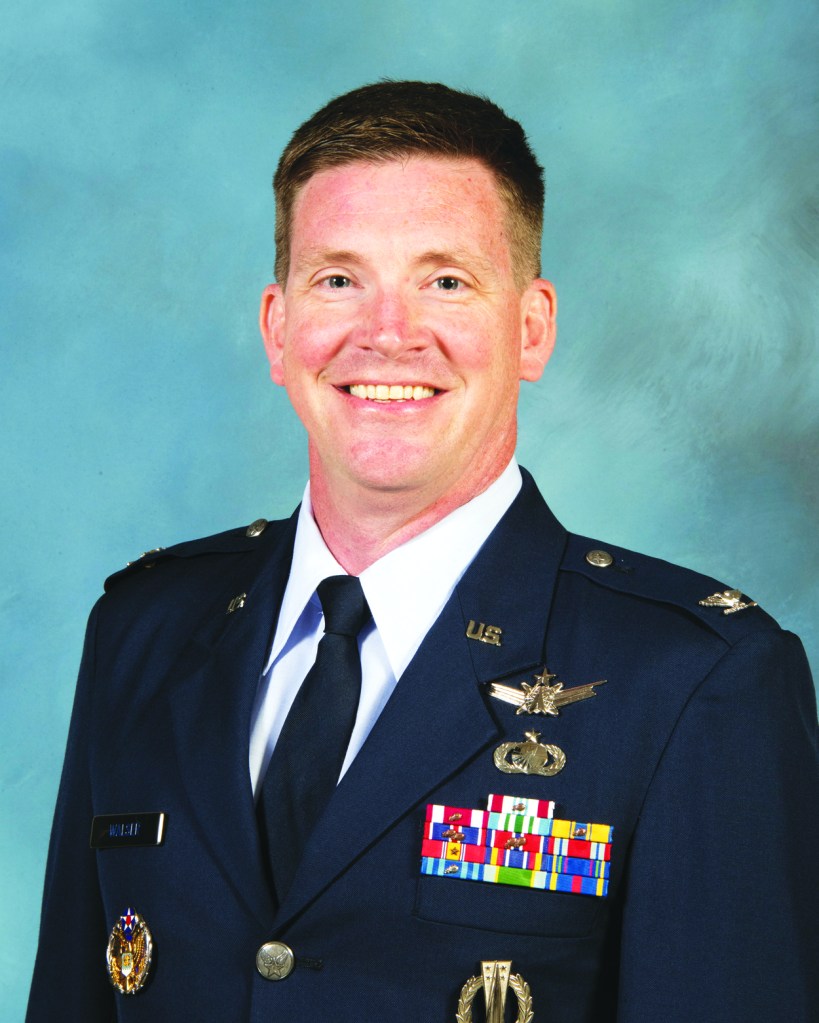 SALISBURY — All the important people were there, and Stacy E. Walser couldn’t have asked for a much nicer backdrop than George Washington’s Mount Vernon home on the banks of the Potomac River.

In a ceremony on the Mount Vernon grounds, Walser received his promotion from lieutenant colonel to colonel in the Air Force.

“It was very, very beautiful,” Walser, 43, said in a recent interview.

His wife and two children attended, of course, but also sharing in the ceremony were Walser’s parents from Salisbury, his sister’s family from Florence, South Carolina, and his best friend and his wife from China Grove.

When he heard his hometown newspaper might be doing a story about the promotion, Walser said, “I would like to thank all my past teachers, mentors, friends and family for their support and instilling the values that have made me successful.

“Without their guidance, I would not have become the man I am today.”

Over his Air Force career, Walser has held positions with serious responsibilities — from being in command of intercontinental ballistic missiles in Wyoming, to weapons testing in Florida, to overseeing engineering, production, test and launch operations connected with the Delta IV launch vehicles.

Those Delta IV vehicles — launched either from Cape Canaveral in Florida or Vandenberg Air Force Base in California — delivered payloads such as military communications, weather, missile-warning, reconnaissance and navigation satellites into space.

After the promotion ceremony, Walser returned to his studies at the Army War College in Carlisle, Pennsylvania, from where he travels back to Fairfax, Virginia, on weekends to be with his family.

By the time Walser finishes courses in “domestic and international variables involved in the formulation of defense and security policy,” he will have earned a master’s degree in security studies, to go with two other master’s degrees he already has.

All of this is pretty impressive for a 1993 South Rowan High School graduate whose job during high school was working at the Peanut Shack in Salisbury Mall.

Throughout his school days at Knollwood Elementary, China Grove Junior High and South Rowan High School, Walser’s keen interest in space and dream of becoming an astronaut propelled him to his career in the Air Force.

“I remember sitting in kindergarten, watching the first space shuttle launch,” Walser said. “The Air Force, to me, seemed the way to go.”

In many ways, Walser was a typical teenager. He played handbells at First United Methodist Church in China Grove.

He ran cross country and track at South Rowan High. He was a lifeguard and editor of the yearbook. He took karate lessons and, yes, Walser worked those three years at Peanut Shack.

But he also wanted to be an astronaut, especially after spending 10 days at the Space Academy in Huntsville, Alabama. In addition, he was chosen for six weeks at Governor’s School and attended the weeklong Broyhill Leadership Conference.

At South Rowan High, Walser participated in Junior ROTC under the command of Majs. Gerald Ofsanko and John Burke. He learned calculus from Debra Hill and gave considerable credit in his teen years to English teachers Judy Trexler and Norma Walker.

Walser set his sights on attending the Air Force Academy early on, and he was familiar with the academy grounds because of visits to Colorado Springs to see a great-aunt and -uncle and cousins.

The late U.S. Rep. W.G. “Bill” Hefner nominated Walser to the Air Force Academy, and at the time, he became one of the first South Rowan High graduates in many years to be accepted.

At the academy, Walser earned a bachelor’s degree in engineering mechanics. He also became the Falcon mascot at sporting events.

Since graduating from the Air Force Academy in 1997, Walser’s assignments have taken him to Vandenberg Air Force Base in California, Cavalier Air Force Station in North Dakota, Warren AFB in Wyoming, Elgin AFB in Florida, the Office of Space Launch in Virginia, MacDill AFB in Florida, the Space & Missiles Systems Center in Los Angeles, and the Pentagon in Washington.

In his acquisitions position for the Air Force Corporate Process Branch at the Pentagon, Walser was deputy chairman for the Research, Development, Test & Evaluation Panel, “responsible for planning and programming for the $34 billion science and technology, test and evaluation Air Force program portfolio.”

Vehicles at the Space & Missile Systems Center in Los Angeles.
Coming out of the Air Force Academy as a second lieutenant, Walser steadily rose through the Air Force ranks with promotions to first lieutenant in 1999; captain, 2001; major, 2007; lieutenant colonel, 2012; and colonel, in September.

Walser said he tried out for the astronaut program and made the first cuts, but in the end he was medically disqualified.

Still, he has felt part of the space program through the Delta IV launch system and a possible future in space product lines, developing satellites and more might loom in his future.

“This is as close as I can get now, and I’m happy to have the opportunity,” Walser said.

His next Air Force assignment after completing Army War College studies probably will come in the spring.

Walser met his wife, Kim, while they were both stationed at a nuclear missile site. They have two children, Ryan, 13, and Sara, 10.

Walser is the son of Stacy T. and Loreen Walser, who live on Lancelot Road in Salisbury.

His parents, along with Kim, attached the eagle pins on Stacy E.’s uniform during the promotion ceremony.

Walser’s brothers, Mark and Matt, live in Lexington and Spencer, respectively.
Sister Laura Taylor and her husband, Ray (a Salisbury High graduate), traveled to the Mount Vernon ceremony with their children, Tripp, 14; Houston, 17; and Jordan, 18.

Houston wants to be a space rocket scientist — maybe something her uncle can help her with down the road.

Tripp Taylor arranged his talented singing family’s rendition of the national anthem, which they sang at Walser’s promotion.

Walser’s best friend since they were 14, Scott “Bubba” Henderson, and his wife, Christy, attended from China Grove. Bubba Henderson and Laura Taylor placed the boards on the new colonel’s shoulders during the ceremony.

Ryan and Sara Walser also participated, with Ryan carrying the U.S. flag and Sara reading a piece selected for the program. The promotion ceremony was administered by retired Col. Chris Coombs.