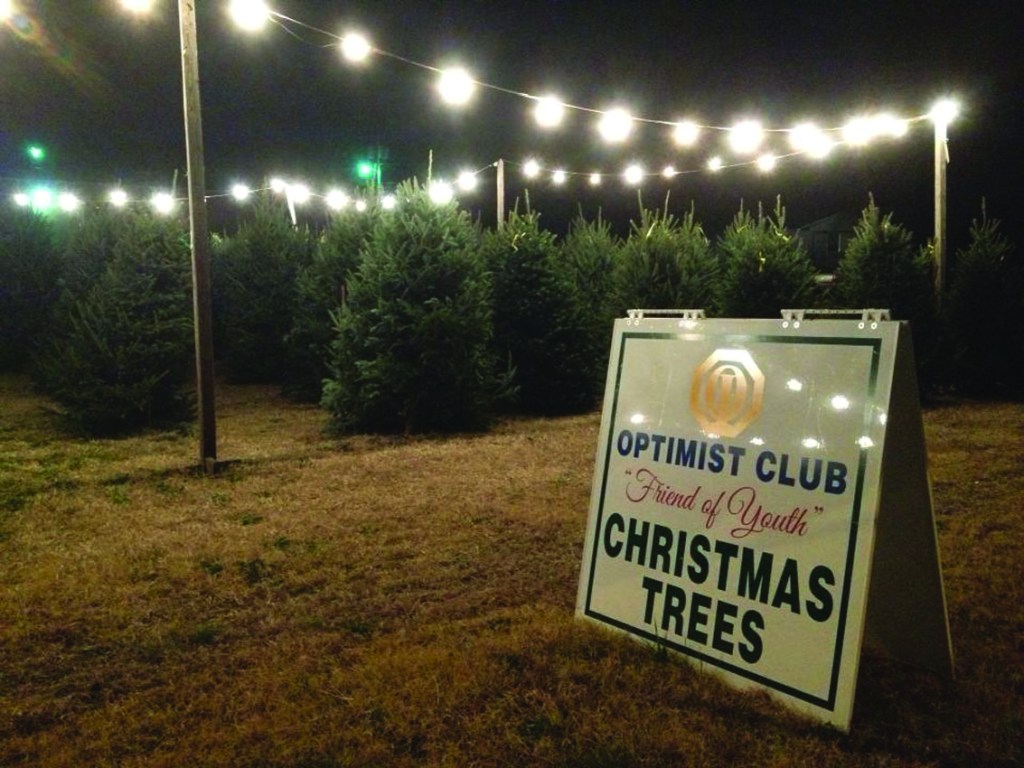 An Albemarle Optimist Club tree lot, like the one shown from a previous year, will not be open this year. Future tree sales are in doubt, too.

All good things must come to an end.

The original idiom from a 14th century poem by Englishman Geoffrey Chaucer, written in Middle English, can be roughly translated “Everything has an end.” It is said that the word “good” was added much later.

Even if Chaucer’s proverb is true, folks don’t much like it.

Take the Albemarle Optimist Club. After more than 60 years of operating a Christmas tree sales lot on U.S. Highway 52, the space in front of the Albemarle Oil Co. will be dark throughout December. The Albemarle club is unable to continue this good service, but the decision didn’t come easy.

“We hated to do it because people depended on us,” said J.C. Boone, president of the club.

Stanly County Chamber of Commerce President Kathy Almond added, “I have purchased trees from the Albemarle Optimist Club on and off for more than 25 years.”

She remembers the lot from the time she was a child.

Optimistic though they are, the club members know they must be realistic. The Fraser firs trucked to Albemarle from Sparta, up in Allegheny County, came from a grower who retired after working with the club for many years. The new grower’s wholesale prices caused retail prices to jump $10 per tree in 2017 and the Optimists thought another price jump for 2018 was too much to ask of their loyal customers, according to Boone.

While the prices went up, available manpower went down. The club is down to 15 members from a high of 84 back in the late 1970s. Tally the hours the tree lot is open and multiply by two — the minimum number of attendants — for a total of 75 man-hours for one week in December. Two weeks means 150 man-hours, or more. That’s on top of unloading and setting up trees which strains muscles and backs.

“Most of our remaining club members are getting up in years,” said long-time active member Kathy Howard. “We have had to pay some young folks to help us work the lot for the past few years and that cuts into our profit.”

The tree lot was the club’s primary fundraiser for many years, giving it the means to carry on projects focused on the needs of community youth. With the lot closing this year, that funding ability is seriously curtailed. For example, the club has contributed to the Childhood Cancer Campaign since 2013.

“Our ability will be limited now,“ said Boone.

Albemarle Optimists plan to continue working locally with county schools to recognize a Boy and Girl of the Year, to sponsor an Oratorical Contest and Youth in Government Day. They also contribute funds and time to maintain the Optimist Cottage at the Boys and Girls Homes of North Carolina at Lake Waccamaw.

Boone says they’ve given approximately $40,000 to that project over the years. With recent hurricane damage, they even increased their annual contribution.
Optimist International exists to serve young people, and the motto, “Friend of Youth,” has guided the activities of the Albemarle Optimists since they were chartered in 1954. The club once sponsored a Little League program in the area.

They also had other successful fundraisers like golf tournaments.

At the 64-year mark, however, the club is stretched thin, said Boone.

“If the club could grow again, we would take the tree project on again,” Boone says. “We have no new blood coming in.”

He thinks it’s a cultural thing.

“As I see it, younger people will participate on a short-term basis, but they’re not making long-term commitments.”

Boone admits he felt that same youthful reluctance to commit to membership back in 1975, but he came on board and then stuck with it.

“I saw what they were doing, and I wanted to be a good community person.”

He has served locally and nationally, and even as Optimist International president from 1995-96. He and his wife travelled the world, meeting club members from diverse backgrounds, all with a mind to “bring out the best in kids.”

Part of bringing out the best in young people is accomplished through the sponsorship of Gray Stone Day School’s Octagon Club. The club chartered in 2011 and currently has 25 active members.

“Students seek ways to serve the Gray Stone community as well as those in our surrounding areas of Stanly and Rowan counties,” according to faculty advisor Amy Jung.

Baking and delivering cookies to local police and fire fighters, cleaning teachers’ classrooms, painting kindness rocks and adopting a local child at Christmas are examples of their service, says Jung.

Boone also credits the students with helping unload trees in years past.

The downshift in numbers is more than a local trend. Boone says that over the last 15 years, the international organization has lost half of its members.

“It’s hard to see our organization struggle,” he says, but he sees many service clubs with the same challenge. Though small in numbers, Albemarle Optimist Club continues to look for other avenues for fundraising, like making bags of peanuts available through local merchants and North Carolina-based banks.

As an incentive to potential members, the Optimist International website offers reduced membership fees to new members who are age 18-30, and to all educators.

Since 2019 marks the 100th year of the organization, the Centennial theme is “Bringing Out the Best Into the Next Century.” Local clubs like Albemarle Optimist and Endy Optimist can be optimistic that their best work may still lie ahead.

Tree hunters take note: Endy Optimist Club operates a lot on N.C. Highway 24-27 next to Shelton Insurance. Other seasonal tree lots are scattered about the county. Two cut-your-own tree farms have sprung up in the county in recent years — Almond Tree Farm on Biles Road and Grovestone Christmas Tree Farm on Clodfelter Road.