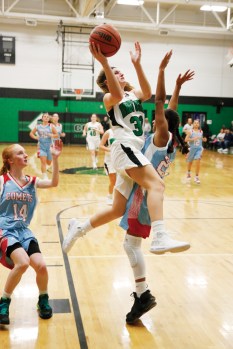 Carmen Bishop goes strong to the basket for West in the second half of Thursday's game. (Photo contributed by Earl Bradshaw) 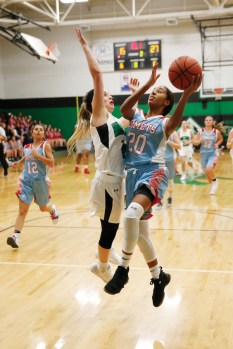 North guard Lexi Goode looks for the layup in the second quarter of Thursday's game. (Photo contributed by Earl Bradshaw)

The West Stanly women’s basketball team won for the second straight time this week without its head coach in attendance.  On Thursday night, the Colts improved to 2-2 with a 54-38 non-conference win over North Stanly (0-2) without Chad Horn on the sideline.

Raelee Furr had the touch in the post for West Stanly, leading the Colts and all scorers with 20 points.

North led 9-8 late in the first quarter before buckets from Callie Donaghue and Kailey Furr put the Colts up after the first period, 12-9.

The Comets did not score a basket in the first 5:18 of the second allowing the Colts to build a double digit lead. A Brittany Greene 3-pointer with 2:03 left in the first half put West up 25-13.

Trailing by 11 at halftime, North cut the lead to eight getting five points in a row from Landis. West answered with a 6-0 run to lead 35-21 with 4:47 left in the third, prompting a Comets timeout.

North again went within nine in the final minutes of the third quarter on a Shelton three-point play, but West extended the lead back to 11 after three periods of basketball, 37-26.

West built a 14-point lead in the fourth, which North cut in half midway through the period with a 7-0 run. West answered with a 10-0 un over a two-minute span late in the fourth to pull away for the win.