A former resident manager at Cohen Group Home in Norwood has been charged with eight counts of embezzlement. 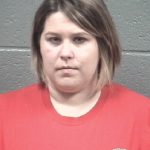 Megan N. Pilkins was arrested Friday following a year-long investigation by the N.C. State Bureau of Investigation. She was given a $10,000 secured bond, according to Audria Bridges, special agent in charge with the SBI.

The alleged crimes occurred from January 2017 through November 2017. Pilkins worked for the Monarch home for more than eight years.

Pilkins is a former resident manager of the Cohen Group Home in Norwood and Montgomery Adult Group Home in Troy, both Monarch facilities.

“Although we cannot provide specifics about personnel matters, Monarch has no tolerance for any activities or illegal behavior that could potentially harm the people we support or undermines the quality of services we strive to provide,” said Natasha Suber, a Monarch spokeswoman.