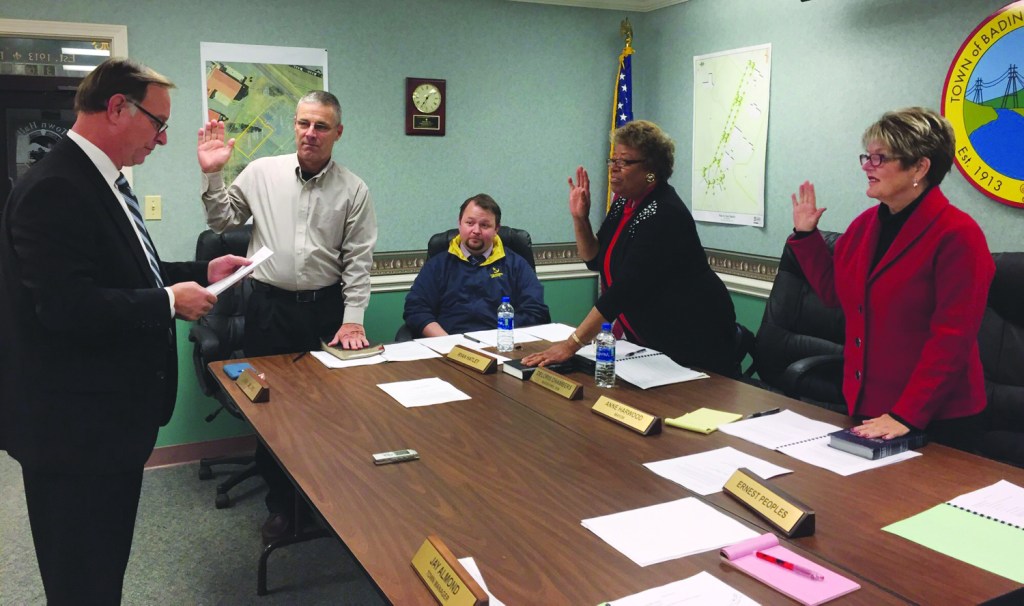 Badin Councilman Ryan Hatley resigned from the Town Council during its meeting on Tuesday evening following plans to move out of Stanly County.

Hatley said he recently purchased a house in Charlotte closer to his job, adding that by the time the council meets again in January, he will likely no longer be a resident of Badin. He handed in his resignation to the town.

“I personally feel, Ryan, like you’ve brought a lot to the board,” Town Manager Jay Almond said.

Multiple council members thanked Hatley for his time on the board and expressed regret that he was leaving.

All were incumbents re-elected in November.

The council unanimously voted for Chambers to again serve as mayor pro tem and for Harwood to keep her position as mayor. Chambers also agreed to continue to serve as the board’s voting representative for the Centralina Council of Governments, with the rest of the council acting as alternates.

The council also reappointed the existing Planning Board and Board of Adjustments members, making plans to appoint alternates as quickly as possible.

Almond told the council that the recent updates to the Roosevelt Street streetscape project have been completed. The town added lined parking and a crosswalk, broken in the middle by a median, to the street.

The town has worked on improving various aspects of the streetscape for a few years, Almond said after the meeting.

Previously, the council had replaced the old median. The recent crosswalk addition also included adding another ramp to make it more accessible. Signs will also be added.

Almond told the town it had received a $500 grant from Keep Stanly Beautiful. The money will be used to purchase crepe myrtle trees to plant in the new median.

The next step of the upgrade will likely be working on the concrete sidewalks, hopefully within the next year or two, Almond said.

Almond said the town has worked on resolving flooding concerns a handful of residents brought to the council’s attention last month. The residents said their properties have seen higher-than-usual amounts of flooding.

The town added a ditch and sloped the alley towards the ditch in order to improve water flow out of the problem area, Almond said. While there hasn’t been a heavy rain to test the changes, Almond said he was hopeful they would be a success.