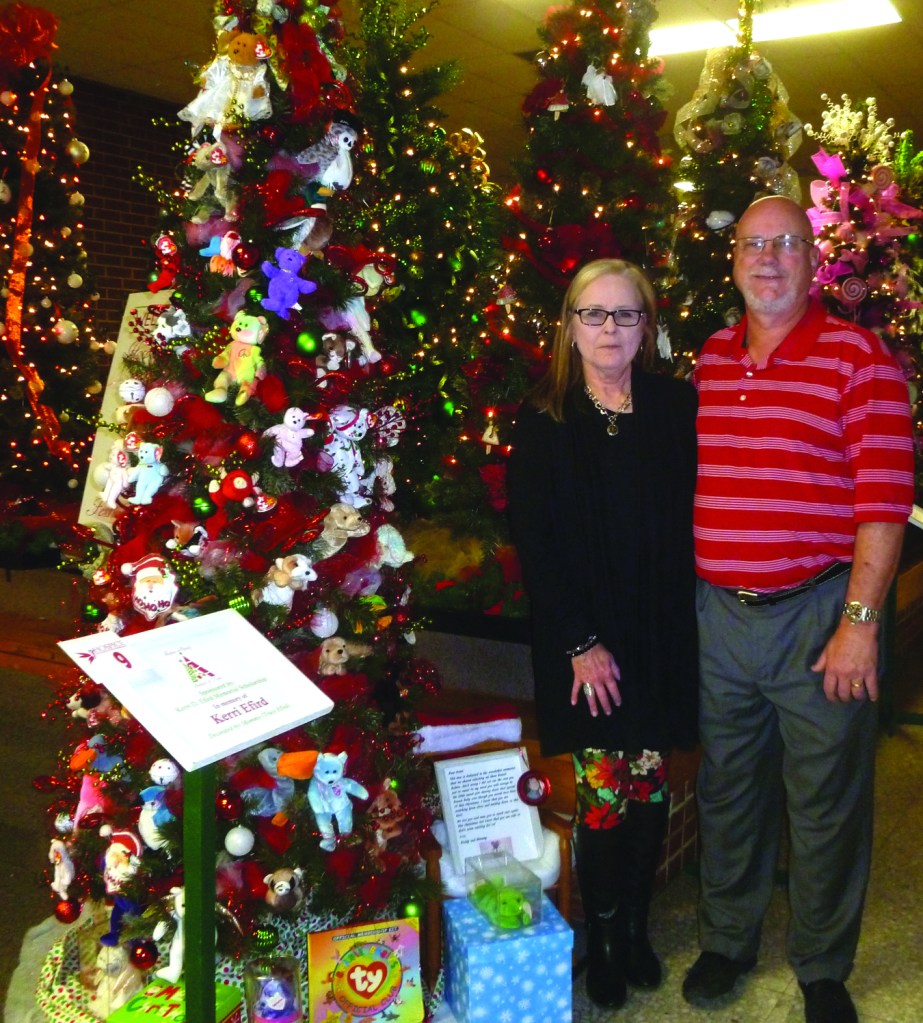 Tracy and Scott Efird stand with the tree they decorated in memory of their daughter, Kerri, who died in 1999. The Beanie Babies are from Kerri's collection.

A crowd gathered in Stanly County Commons to admire intricately-decorated Christmas trees, sing carols and light the Angel Trees in memory of loved ones who have passed on.

Beth Plowman, marketing and development manager for Hospice of Stanly and the Uwharrie, which plans the event, noted the trees in the room are part of two separate events: the Festival of Trees and the Angel Tree Lighting.

Trees running down the center of the room bear a multitude of decorations comprising a variety of themes for the Festival of Trees. Simpler trees covered only in white Christmas lights, a star topper and angel decorations are the Angel Trees. They line one wall of the room.

Guests were invited Dec. 3 to admire the Festival of Trees as they enjoyed light snacks. The crowd then sang three songs led by hospice staff, heard a prayer offered by the hospice chaplain and then turned to watch the Angel Trees being lit.

Guests at the Commons can see the trees over a period of a few weeks as they walk the Commons or visit offices in the building, but the recent event is community-focused and an intentional time of remembrance.

David and Lauren Cooper decorated a tree in memory of their daughter, Bexley Grace Cooper, who was stillborn on Aug. 1. The tree was sponsored by David’s employer, Stanly Funeral and Cremation Care. It included pink elephants representing Bexley’s nursery theme.

Stephen Aldridge, president of Stanly Funeral Home and Cremation Care, said his company normally sponsors a tree and leaves the decorating to hospice.

But this is the second year in a row that an employee of the company has decorated the tree in memory of a loved one.

David Cooper, a funeral director, and his wife, Lauren, lost their baby, Bexley Grace Cooper, when she was stillborn on Aug. 1. Bexley was their first child and was full-term, according to Aldridge.

Last year, the Coopers decorated the tree in orange in memory of Lauren’s father, who had died of acute myeloid leukemia last October.

The tree this year holds elements of the theme Bexley’s nursery had.

“This one, they put the little pink elephants on it because that was going to be her theme,” Aldridge said.

For Tracy and Scott Efird, of Locust, decorating a tree allows them to create a display highlighting something their late daughter, Kerri, loved.

This year, the couple decorated a tree in Beanie Babies, adding coordinating items at the base of the tree. The collectibles were significant to Kerri, who died in 1999 at the age of 18 after struggling with cystic fibrosis. She would have been 37 now.

Each year, the couple chooses a different theme. The first year they participated, they decorated a tree with a Winnie-the-Pooh theme. Kerri was called “Kerri-Pooh” since she was born, Tracy said. Another year, frogs dominated the tree. Kerri loved the amphibians and the acronym F.R.O.G. (Fully rely on God.)

Kerri hoped to visit Disney one day, but even though her wish was granted by Make-A-Wish, Kerri was unable to go due to her health.

In honor of that dream, her parents decorated a tree one year in Minnie and Mickey Mouse decorations. Those items were later donated to hospice.
Another tree sponsored by JT Russell and Sons was decorated in honor of Kim Russell, who died in 2008. Russell’s three daughters, Kayce, Nikki and Kayte, work for the company.

Some of the trees are decorated in light-hearted themes. One for First Bank is covered in money-inspired ornaments and items bearing the company’s name, while another sponsored by Kiddie Kare is covered in decorations made by the young students. Stanly Community College’s tree holds the colors and marketing material from the school.

For others, like the Efirds and Coopers, the trees have a different meaning.

Of the various themes the Efirds have used over the years, Tracy said she doesn’t have a favorite.

“All of them are significant,” she said.

Each has represented facets of their daughter. The Pooh ornaments that decorated the first tree they did with hospice now cover a tree in Tracy’s office.

A letter to Kerri from her parents is framed and sits on a small chair at the base of her tree.

“Dear Kerri, this tree is dedicated to the wonderful memories that we shared collecting all these Beanie Babies … don’t worry, I did not use the ones you put in cases!” the letter reads. “In my mind, you will always be the sweet little girl chasing down that special Beanie Baby even though you would have been 37 this Christmas. I know that you are watching from above and smiling down on this tree! We love you and miss you so much once again this Christmas but know that you are safe in God’s arms waiting for us. Love, Daddy and Mommy.”

Both events are fundraisers for the hospice. Sponsoring a tree costs $300, and each angel is $10. This year, the hospice expects to raise about $20,000 from the two, Plowman said. The angels are hand-made by volunteers and can be purchased through December. Sponsors for the Festival of Trees can choose whether to decorate their tree or have hospice workers make them.

There are more than 500 angels on the trees, each bearing the names of the people they represent. The trees are arranged in alphabetical order based on the surname of the deceased.

In addition to the nine angel trees, there are 40 of the uniquely-decorated trees in the Festival of Trees, as well as four additional trees supplied by the hospice.

The money is used to help hospice patients and their families, Plowman said.

Guests could vote for their top three favorite trees. Plowman said the results would be tallied in the near future.