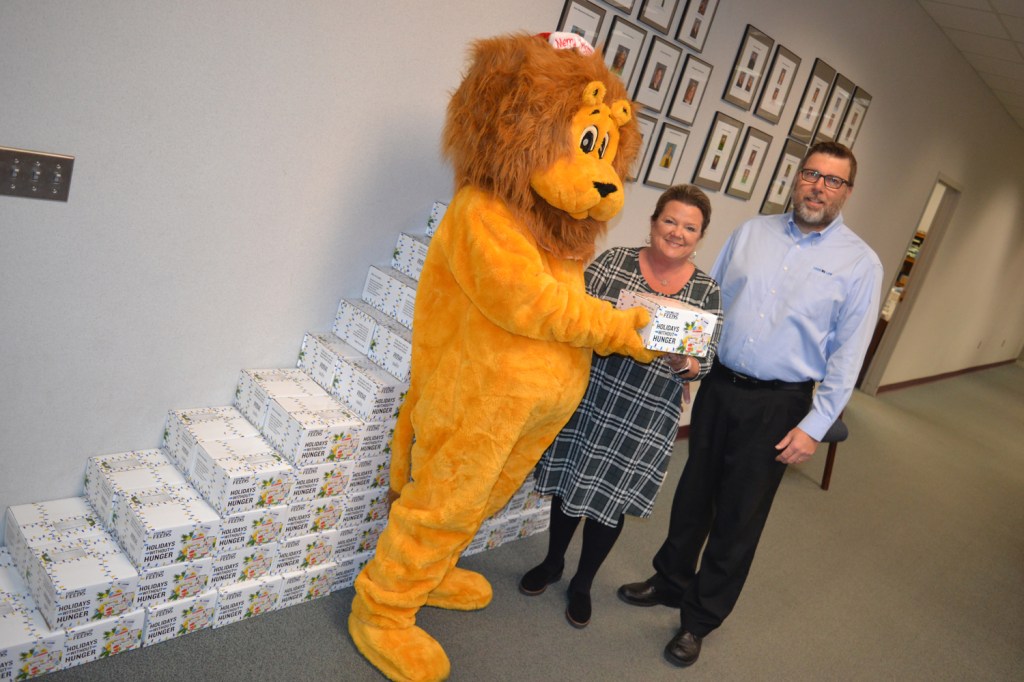 Food Lion's mascot hands Vicki Calvert, assistant superintendent with SCS, a food box alongside Tim Frick, manager of Food Lion of Oakboro. Part of the grocer's Holidays Without Hunger campaign, the food boxes provide a meal for a family at a cost of $5. Food Boxes are set to be distributed to students before the Christmas break.

A number of local students will be the recipients of donated food for the holidays.

Part of Food Lion’s Holiday Without Hunger campaign, as many as 140 boxes of extra food were designated last week for students at Stanly County Schools. The boxes will likely be placed in the system’s backpack program and sent home with the students in time for the Christmas break.

“They put all the food in their backpack when they go home for the weekend,” said Cindy Brown, program specialist with the N.C. Department of Health and Human Services.

“We let the schools determine how they want to do it,” she added.

“A box makes one good meal to feed four to five people,” said Tim Frick, manager of the Food Lion store in Oakboro.

“It’s a way to give back to the communities,” Frick added about Food Lion’s campaign.

Food Lion’s drive runs through Tuesday at the grocer’s more than 1,100 stores.

The food is distributed in areas where there’s significant need, or economically challenged families.

“This is where I know the need is,” Brown said of Stanly County. “It’s awesome that we can buy these and then give back.”

Both Brown and Frick were at the district’s central office Dec. 6 distributing the food boxes, courtesy of the Food Lion in Oakboro, to school principals as they left a meeting so they could have the food supplies on hand at their respective schools.