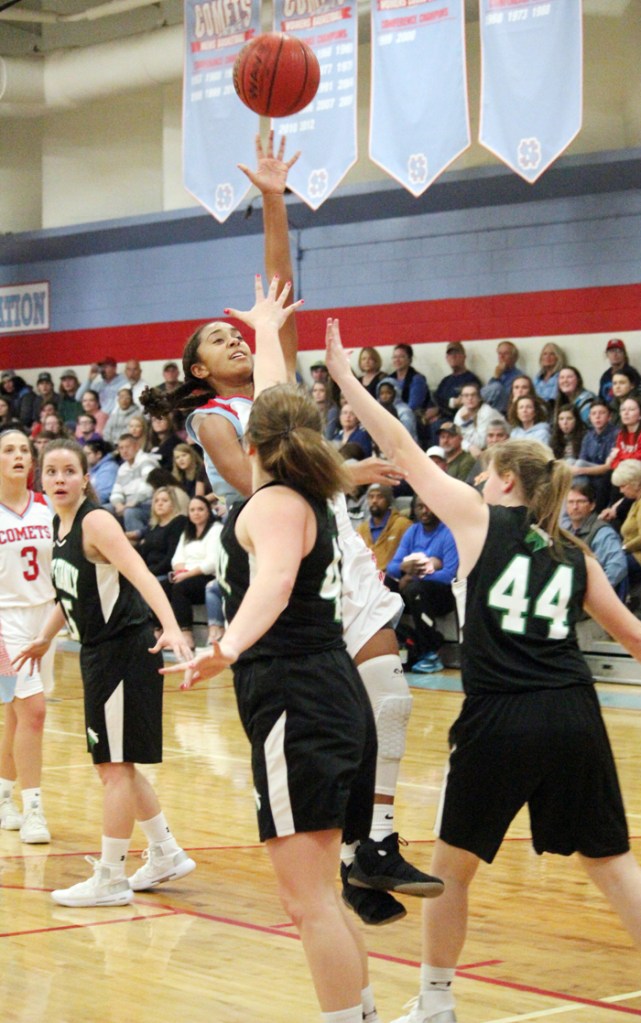 North guard Lexi Goode puts up a runner in the late over the defense of West's Raelee Furr and Cassidy Scott (No. 44) in Monday's game. (Photo by Charles Curcio)

North ended a four-game losing streak with the win as well a three-loss slide in the all-time series between the Comets and the Colts. The loss for West was the team’s third in a row.

Free throws played a critical part of Monday’s outcome; North had the advantage at the line hitting 16-of-26 overall, including 11-of-14 in the first half. West was 9-of-25 on foul shots, including 5-of-15 in the second period.

The Comets trailed 6-2 early in the first period but hit free throws to take a brief lead. Brittany Greene hit two free throws with two minutes left in the opening quarter, but a Payton Landis three and a Goode shot in the final seconds put the hosts up by four, 12-8.

North maintained the advantage in the second, leading by as much as six in the final 1:42 before late free throws got West within three, 23-20, at halftime.

The Colts did not score for the first 4:45 of the third quarter, but the Comets managed just four points over the same period, building the hosts’ lead to seven. Kailey Furr cut the deficit for West to six in the final 45 seconds, leaving the Colts down after three quarters 31-25.

North led by as much as seven in the final period, but West had one last chance to get within a possession of the Comets. Down 38-34 with 25 seconds left, the Colts’ Furr got an opportunity in the lane to get West within two points, but her shot rimmed out and North’s Syrai Jackson got the rebound and the Comets ran the clock down to 2.5 seconds before the Colts fouled.

The Comets will be off until playing in the Sam Moir Holiday Tournament at Catawba College after the Christmas holiday.

West Stanly will be at West Montgomery Tuesday night and hosts Albemarle on Thursday before taking the remainder of the holidays off.