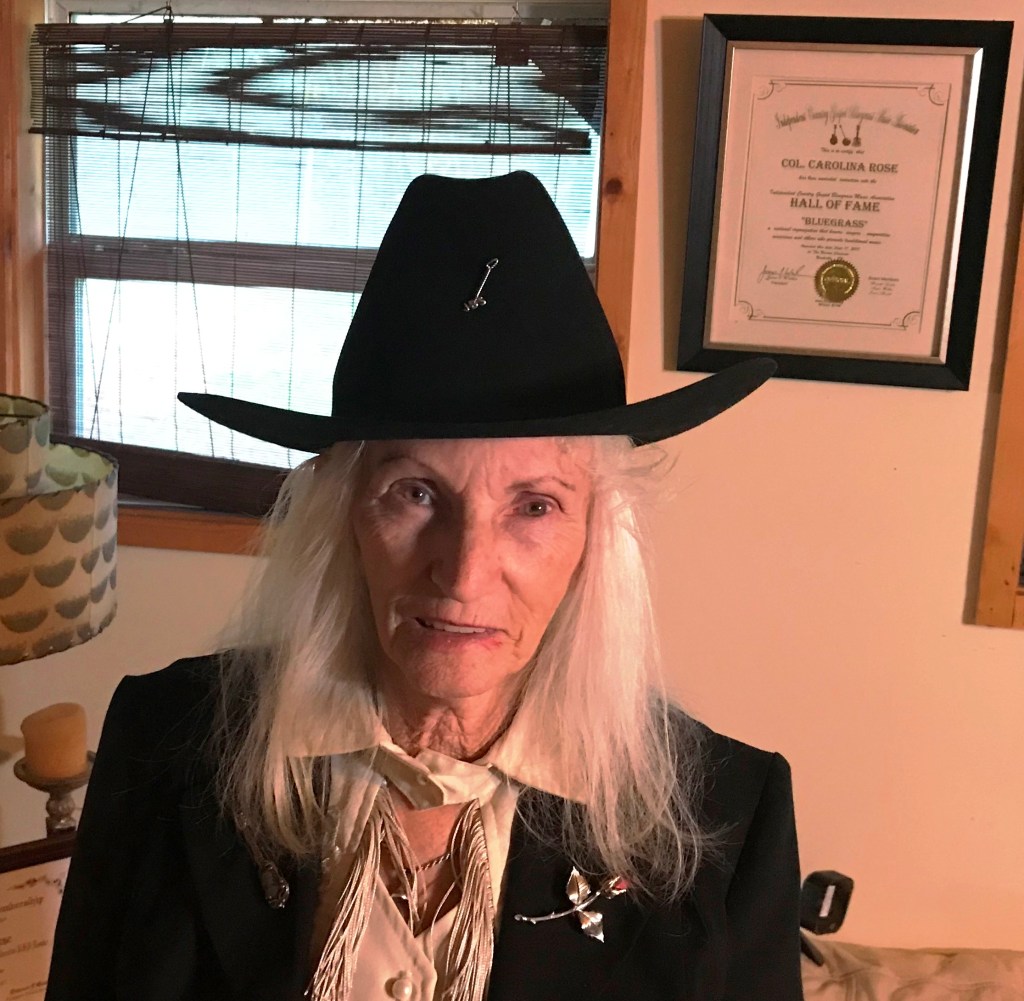 Carolina Rose is the focus of a pending documentary.

After starting to perform at an early age (“I started singing before I ever started school,” she says), Gloria Jean Polk Harward, better known by her performing name of Carolina Rose, has met, sang and rubbed elbows with many of country music’s elite during a lifetime in music.

And in recent days, the Aquadale resident’s background and life story have become the subject of a documentary being put together by filmmaker Kenny Lee of Country Star TV, a digital broadcast channel “dedicated to country music not frequently featured on other country music television channels.”

“Getting started in music was hard,” said Harward, who says she is the out-of-wedlock daughter of late bluegrass icon Bill Monroe, and who persevered through a difficult childhood before pursuing her dream of becoming a country recording artist.

“I was born in Greenville, South Carolina,” said Harward, whose birth mother was Ruby Polk, originally from Anson County.

“My mother gave me up to my aunt and uncle, James and Vergie Johnson, and they brought me to Norwood when I was a baby,” she said. “I was raised on Pine Street, and went to Norwood School, but I quit before I graduated. I didn’t like books.”

But she did like music, and began learning to play the guitar as a child.

“The guitar was bigger than me,” laughed Harward, who said she began singing on the Coleman O’Neal radio show on WABZ in Albemarle.

“Their broadcast station was located in the basement of the old Albemarle Hotel then,” she said.

“Later on, I began performing at the Stanly Theatre on West Main Street in the ‘Stanly County Jamboree,’ ” said Harward. “That was a show that was held at the theatre there several times a year.”

But, to aspiring country music artists, reaching Nashville is the ultimate goal, and Harward was no different.

“I went to Nashville two times,” she said. “The first time was in the 1970s, and the second was in the 1990s. I stayed two or three years each time, and I moved back here in 1998. While I was there, I met and performed with starts like Little Jimmy Dickens, Vern Gosdin, Jim Ed Brown and Charley Pride.”

During her stints in Nashville, Harward met two ladies she describes as “very special” — the late Martha Carson and Roni Stoneman.

Carson, known in Nashville as “the first lady of gospel music,” first gave Harward an opportunity to perform with her during portions of the “Midnight Jamboree” show at the Ernest Tubb Record Shop.

Stoneman, who first gained fame as a member of the Stoneman Family Band in the 1960s, later became a regular cast member on “Hee Haw.”

“We became friends and roomed together at one time,” said Harward, who still occasionally performs with Stoneman.

In between her trips to Music City, Harward found time to raise four children, three boys and a girl, as well as hold down a job for Equitable Life and Casualty Insurance, where she was once named “Employee of the Year.” Over the years, she has recorded 11 albums, including a recent release, “Just Found,” in addition to releasing an autobiography. Her current performance credits now include 15 consecutive years at the Jerusalem Ridge Music Festival in Rosine, Kentucky, and combined shows with Al Jones and Frank Necessary, as well as appearances on The Cumberland Highlanders Show on Dish and Direct TV.

Harward’s performances have earned her a number of awards and recognitions. In 2015, she was named “Artist of the Year” by the Country Blast Internet Radio Show, a show originating from Chicago, and which features independent country artists.

In 2016, Country Blast Radio honored Harward as “Entertainer of the Year.” That same year, she was honored as a “Kentucky Colonel” for her contributions to music in Kentucky. The award is the equivalent of North Carolina’s Order of the Longleaf Pine.

In 2017, Harward was inducted into the Gospel/Bluegrass Hall of Fame, and has been featured on two country music promotional calendars.

Harward’s recognitions and awards have contributed to Lee’s decision to feature her in his upcoming documentary.

Lee, who has credits as a songwriter (“The Trump Card,” a song used in Donald Trump’s 2016 campaign), and a script writer/director (“Untamed Justice,” a low-budget western) is originally from Camden, South Carolina, but has lived in Nashville for more than 30 years. In early December, Lee was set up with lights and camera at Harward’s home on N.C. Highway 138, video-recording segments for the final production.

“Our shows are featured on Roku and various internet streaming channels,” he said.

“We still have lots more to do before this will be ready for production,” he added. “Hopefully, we will be ready to release it in spring of 2019.”