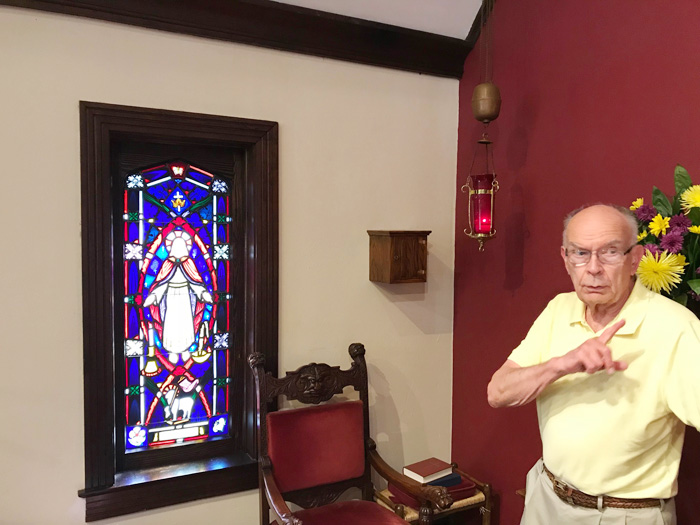 Having existed in its Pee Dee Avenue location since 1940, Christ Episcopal Church is a well-known landmark in Albemarle. And over the past few months, the house of worship has received a facelift of sorts in the form of repair, renovation, cleaning and partial replacement of its stained glass windows.

Photos by TOBY THORPE
A stained glass window at Christ Episcopal honors Jane H. Scheer, who has served as organist and choirmaster for 43 years.

“We had pushed for restoration of the windows for 10 to 12 years,” said Stanley Scheer, who served as the congregation’s liaison with Foothills Sand to Glass of Statesville, the window contractor for the project, as well as with Todd Kimrey Construction and Uwharrie Home Works, both of whom also assisted.

Scheer noted that when the church was built, the original windows consisted of semi-clear striated glass.

“According to the church history, some of the congregation in the early years actually felt that the building was too brightly lit by the morning sun. At the front of the church, behind the pulpit, the morning sun would shine directly through the semi-clear windows into the eyes of the congregation, prompting the church to have those windows painted over,” he said. “Over the years, as the church building was eventually updated and the original windows were replaced, various families and individuals donated stained glass windows in memory and honor of loved ones.”

What many may not know, said Scheer, is that each window tells a story.

“Stained glass windows were designed long ago to illustrate biblical stories and events for those who could not read,” he said. “And there is something unique about each window that reflects something about the donor or the honoree …they are chock full of symbolism.”

As examples, Scheer cited one window donated by the Ross family, picturing Christ with children, representing two of the family’s children who had passed away at a young age.

Another window, picturing a basket of loaves and fishes was, according to Scheer, not only a reference to Christ’s feeding the 5,000, but also a representation of Frances Harris (for whom the window was placed) and her long-time involvement with the home-delivered meals program in Stanly County.

Still another, which Scheer describes as “really unusual,” was placed in memory of John and Jacqueline Ebeling. This window depicts Saint Hildegard von Bingen, who is known for her composition of music (depicted on the pane by a pen and scrolls), her beliefs in holistic health (depicted by a mortar and pestle), and her lifetime as abbess to her monastery (depicted by a shepherd’s crook).

The restoration process for the windows consisted of three steps, said Scheer, who explained that before the stained glass could be installed, the window frames and supports were repaired, and in some instances, replaced.

“The windows on the west side of the church get the afternoon sun, and they had become really worn and bowed,” he said. “In fact, in 2011, when the interior of the church was renovated, we instructed the contractor not to open the windows on that side for fear the glass might fall out of the frames.”

Following this year’s replacement and repair of the window frames, the stained glass was then installed.

“All the panes were removed and cleaned prior to being re-installed,” he said, “and this makes the color and detail of the windows especially bright on the interior.”

To further protect the windows, Scheer noted the third step — installation of a protective pane of clear tempered glass on the exterior.

“In addition to protecting the stained glass windows, this will save money on heating and cooling as well as helping acoustically,” he said.

In addition to cleaning and renovation of the church’s existing windows, two new stained glass windows were added on the west side of the building, one to honor a past rector, and the other to honor a current church member.

“This is the first time we have ever installed more than one window in a year. Thirty-four families contributed to the installation,” said Scheer, who explained that the windows are placed in honor of Philip Byrum, a former rector at Christ Episcopal, and in honor of Jane H. Scheer, (Stanley’s wife) who has served as organist and choirmaster of the church for 43 years.

The placement of the window in honor of Mrs. Scheer was a natural decision, said Stanley.

“It seemed to just make sense that it is right behind the church organ,” he said.

The project was financed by the church’s building and endowment fund, with assistance from a grant from the Charles A. Cannon Foundation, plus one donation from a church member.

With the project now complete, Scheer expressed his thanks to all those who have supported and assisted with it, as well as a reminder that an additional installation is planned.

“We are most appreciative,” he said, “and we do plan to install a third new window in the future.”