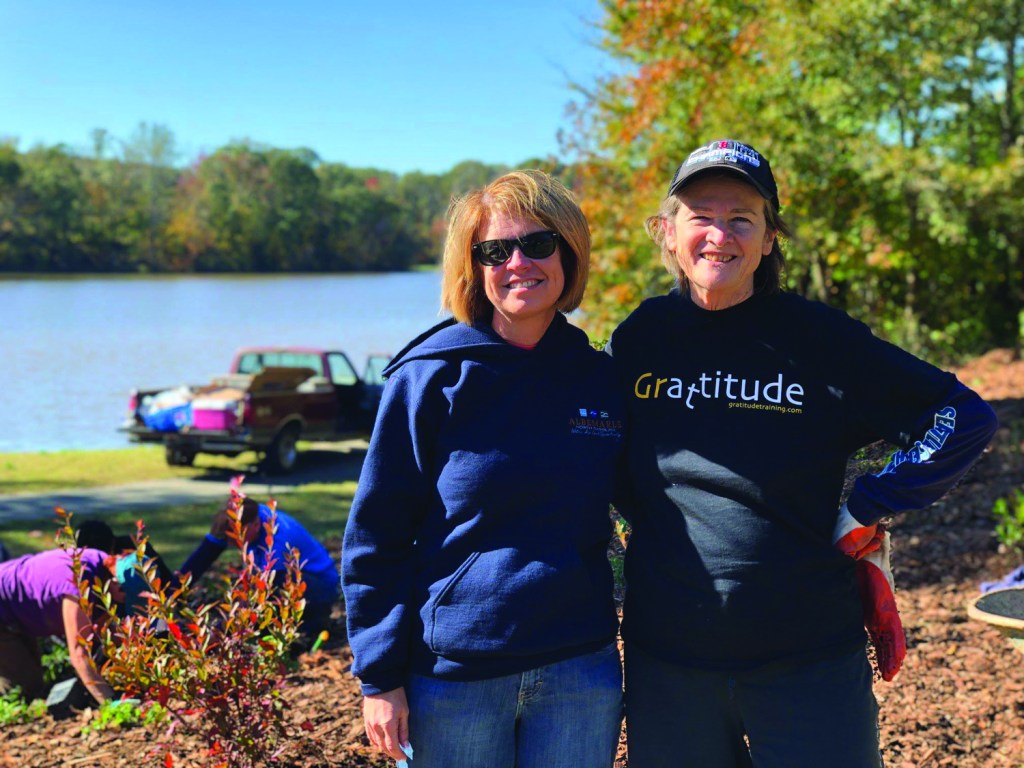 When a Charlotte group decided to help the environment, veterans and those with disabilities all in one project, Albemarle’s City Lake Park received the benefits.

Team ML-24, a leadership training class of Gratitude Training, Inc., settled on City Lake Park after speaking with Lisa Kiser, director of parks and recreation for the city of Albemarle. The group spoke with other areas, but it determined City Lake was the best fit for the project and deadline.

“Part of our training is to develop a legacy project that will really reverberate throughout the community for some time,” Cathy Buckley, a member of the group, said. “We get to decide what areas we want to concentrate on, so we decided we wanted to concentrate on the environment, veterans and metal health.”

After brainstorming and speaking with Kiser, the group decided on adding a pollinator garden to City Lake Park as well as making a wheelchair-accessible concrete path and adding in an accessible picnic table and grill.

“We think (the garden is) a great addition to the park,” Kiser said. “One, it’ll help give our pollinators a place where they can find food and pollinate and add to our climate and ecosystems. And also, number two, it’s a natural beauty for the park right there by the lake, so aesthetically it’s very pleasing. And third, part of their project was a legacy for wounded veterans, so they poured a concrete path to accessible picnic table and grill for them to use.”

The parks and recreation department donated $500 to pay for the grill. The rest of the funds were raised by Team ML-24, which held a concert in the park as a fundraiser.

The team was made up of 18 individuals who have since graduated from the program. Previous graduates assisted the group, giving them about 25 people in all, Buckley said.

“I think the basis of this training is to say being connected with others and giving back for all we’ve been given is the most enriching thing you can do with your life,” Buckley said. “Knowing that we’ve planted these flowers that are not only going to bring joy to veterans and others who may be there, but also sustain bees — there’s been a lot of publicity about the state the bees are in and also Monarch butterflies. Making sure to sustain them and get what they need is very important. And also making connections with the community itself. It’s a positive thing. We got a lot out of it.”

Bobbi Sheets, commander of the Veterans of Foreign Wars Post 6365 in Locust, was thankful for the work Team ML-24 did. The post became the nonprofit umbrella through which Team ML-24 funneled donations.

“I think that park will benefit the disabled people with scooters, wheelchairs, anybody that needs access right there,” she said. “I think it’s going to be an amazing improvement to that park. It’s actually a model; what they’re doing is they’re modeling it for other cities in the country, so it’s a great concept.”

Sheets, who is also a VFW district officer, said that while she was grateful for the project, she wished that more people from the community had helped.

“They wanted to put their money here with no return, with absolutely no return and no expectations,” Sheets said. “They have absolutely no contact with the area, no ties with Stanly County at all. None of them do. But yet, they chose Albemarle and City Lake Park out of all the places in North Carolina and none of them have any ties to Stanly County. Yet none of the veterans groups except ours could participate or help with this project. It just makes me sad.”

Sheets and her husband, Dave, helped. Another veteran, Tim Morton, was present at the fundraiser and is part of the Norwood post. Some in the veterans community donated money or shared social media posts about the project to help raise funds, but Sheets wished there had been more manpower to install the equipment, pour concrete and plant the pollinator garden.

“It really does make me sad and upsets me, because they didn’t show up,” she said. “It was out there and advertised. They knew about it — at least the VFW group knew. The veterans community didn’t show up, and it was for us.”

Sheets said it touched her that the group came from Charlotte to pour their efforts into Stanly County.

“I know it was their project and they loved to do it: these are doctors, and physicists and nuclear engineers and authors,” she said. “I have a bachelor’s degree and I was the lowest degree out there. These are highly-degreed people who did this for our community, and it was all about them giving back and making a difference to the lives of veterans and disabled people. And they’re not just going to stop by putting in the park. They’re coming back in the spring to make sure the plants took, mulch the garden. I’m very happy I got to know them.”

While the temperatures have dropped, the pollinator garden remains planted and plans are in the works to make sure it stays that way in the spring.

Buckley said she and others from the group want to make sure the pollinator garden stays filled with appropriate plants.

“We definitely want to make sure it’s maintained,” she said. “So whatever the city can do is great, but we’re also prepared to go back and volunteer and re-plant — replace plants that might’ve died over the wintertime. We’re committed to making sure it’s a beautiful project.”

Kiser said an area beekeeper is interested in working on the garden, and she hopes to organize a volunteer group to maintain it.

With the addition of the pollinator garden, the department hopes to become a Bee City USA. Official Bee Cities submit an ordinance passed by the municipal government and have a committee focused on the issue, in addition to meeting other requirements. The cities promise to protect pollinator habitats.

Kiser hopes to add an accessible swing in the future.

“The ML-24 group was a great group to work with,” she said. “It was amazing to see what they were able to accomplish in a short amount of time.”