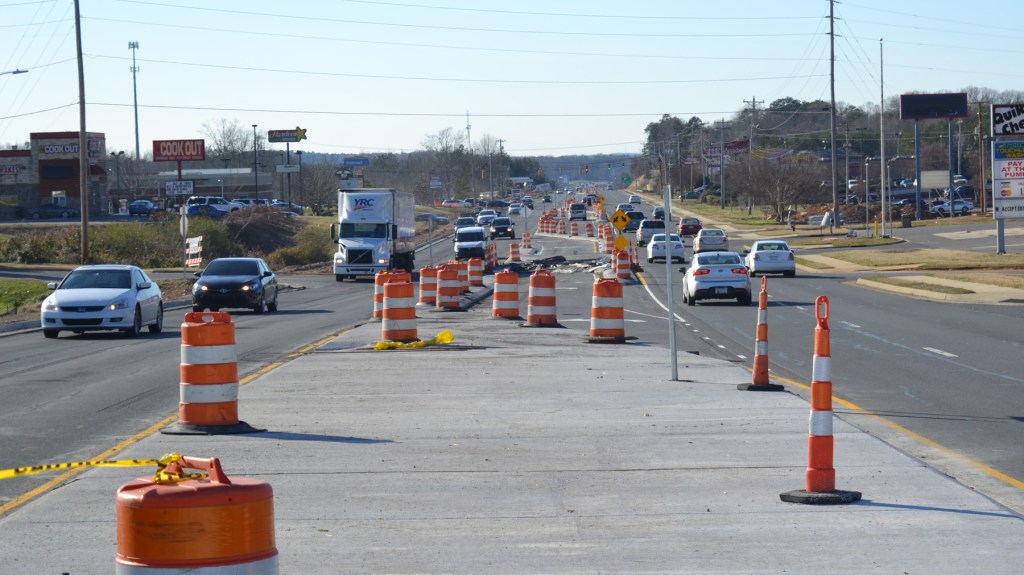 Photo by Ritchie Starnes Construction barrels pepper the concrete median along the N.C. Highway 24/27 Bypass in Albemarle. NCDOT has been implementing safety improvements along the highway.

Road improvements along N.C. Highway 24/27 Bypass in Albemarle originally set to conclude by the end of November will now carry over into the spring.

A pair of hurricanes, an early winter storm and an overall rainy season has prolonged road construction on N.C. 24/27 along the city’s retail corridor. In addition to weather delays, cost overruns have contributed to the N.C. Department of Transportation needing extra time to complete its project.

“Some work between December and March can’t be done,” said Rick Baucom, DOT engineer, referring to low temperatures during winter.

Two projects, one recommended by DOT, and another on behalf of the city of Albemarle, were combined. While DOT wanted to implement right-in and right-out islands between Leonard Avenue and Henson Street in the interest of safety, the city wanted highway improvements just south of Leonard Avenue.

“The window of opportunity opened up just right,” said Michael Ferris, city manager. “We don’t need to be working on top of each other.”

Albemarle paid DOT $170,000 for its share of the work while the state prepared to start its $1.5 million project. Another $280,000 was budgeted for DOT land acquisitions.

DOT awarded the job in late June with the work starting a month later. But weather delays took a toll on the construction schedule. Once the Nov. 30 deadline passed, a new deadline was set for Dec. 14. Only further delays pushed the deadline, Baucom said.

Between the continual presence of construction activity and the start of the holiday shopping season, traffic along the bypass and Leonard Avenue consistently slowed to a crawl, causing snarling backups.

However, DOT terminated construction activity during the week prior to Christmas so shoppers could escape the burden of gridlock and retailers enjoy a lucrative season, too.

There remains additional road work to be done, including sidewalks and signals. Although it might be March when the work resumes, there could be periods of construction.

“If we get unusually warm weather, they’ll be out there working,” Baucom said. “Right now, they can’t work. They can’t comeback until after Christmas.”

Following DOT crash studies, data suggest the new designs will improve traffic safety along the stretch of highway. No more will cars be allowed to exit shopping centers in the area and dart across both directions of traffic on the bypass. Motorists will now be forced to turn right when leaving the shopping center and then use a left-turn island when making  a U-turn.

East and west traffic along the bypass will be forced to use the left-turn islands as well.

Another lane has been added on Leonard Avenue for traffic exiting the shopping center. A middle lane now allows for a motorist to turn left or go straight. A far left lane is for left tuns only (westbound) while the far right lane is for right turns only (eastbound).