Chance recovers from near fatal illness

On the day before the general election when he was set to run unopposed for school board, Jeff Chance was hospitalized with a life-threatening illness. 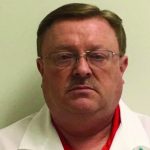 “I had a couple of days where it was touch and go,” Chance said of his illness Wednesday prior to a medical follow-up.

Chance, 58, suffered from double pneumonia, which compromised his immune system. Both his kidneys and lungs shut down. Doctors had to perform a tracheotomy so Chance could breathe. He was also dependent on a ventilator, Chance said.

“The good news is that I don’t remember anything and I don’t care to,” Chance said.

His wife, Sandra, kept a journal of the ordeal. When she attempted to share the details with him, Chance said he quickly stopped her.

A physician assistant for the past 30 years, Chance understood the gravity of his situation. Hospitalized for six weeks, four weeks bedridden, at Carolinas Medical Center in Charlotte, Chance lost 40 pounds off a near 200-pound frame. Consequently, he remains physically weak as he works toward recovery.

He also understands what’s necessary to get better. Recovery requires physical therapy to get his strength back. There has been gradual progress.

“I can shave and dress myself,” he added.

Right now, he needs a wheelchair to assist with mobility.

The Stanly County Board of Education has been supportive of Chance and his wife during his illness. Board member Glenda Gibson, a former West Stanly High School classmate with Sandra, kept in constant contact with her and shared updates with school leaders.

“She (Sandra) asked me to pray. Pray hard,” Gibson said.

“I didn’t pray selfishly for Jeff to get better to serve our board. I prayed for his body to heal in God’s time,” she added.

Not only did Chance miss his Nov. 6 victory celebration as he makes a return to the school board he formerly served as chairman, but he missed the swearing in for new members at the December meeting.

Plans call for officials to come to his home next week so Chance can take his oath of office. Jan. 8 marks the next scheduled school board meeting, but Chance is not likely to attend due to his recovery.

He returns to the all-Republican board after a break from the seat.

Gibson said Chance “brings a wealth of knowledge and experience.”

“He doesn’t bring any type of agenda,” she said. “He listens to all of the information before making his own decision.”

Late February is when Chance plans to return to work, he said.

Meanwhile, he continues to undergo rehabilitation here in Stanly County.