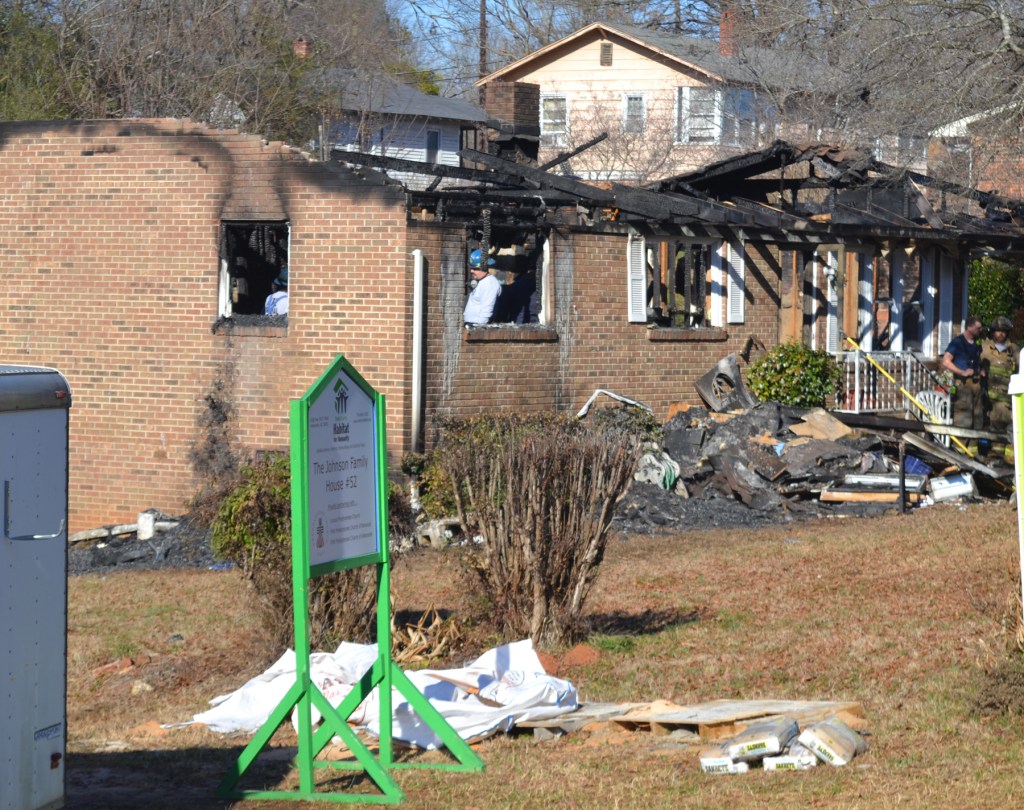 Firefighters comb through a burned house at 408 Jackson St. in Badin in search of the cause of a fire that claimed two lives.

Although the fire marshal is waiting for the medical examiner to make positive identifications from Wednesday’s double fatal blaze, the names of the victims are already circulating a mourning community.

Danny Barham, Stanly County fire marshal, declined to name the Badin fire victims Friday, pending the medical examiner’s ruling. However, family and friends have been sharing the names of the victims as Sandy “Bird” Wilson and Ricky Kendall. The men were reportedly cousins.

Sources said Kendall was suffering from cancer and that Wilson, nicknamed Bird, had moved in to help care for him.

“Several weeks ago a friend told me that Ricky had cancer and was going through treatments,” Jeff Williams, a former classmate and teammate of Kendall, wrote in a Facebook post Thursday. “I got his home number and vowed to call him and go visit. Like usual, the Christmas holidays and my busy schedule got in the way. Then I wake up yesterday to the news of a house fire in Badin on Jackson Street.”

Williams said he knew Kendall lived on the street. He said his heart sank when he learned Kendall died in the fire.

He also shared a couple anecdotal stories involving Kendall, like the time he stopped a South Rowan High School basketball player from slugging Williams during a game.

“He never forgot that, and reminded me every time he saw me of the night,” Williams wrote.

“Love people while you can. I loved Ricky Kendall. RIP brother,” he added.

Prior to moving to Badin, Wilson was better known in Albemarle and where his twin daughters lived.

Jay Almond, Badin town manager, met Wilson about 20 years ago when both worked in downtown Albemarle. Almond worked for The Cornerstone while Wilson worked at The Boardroom Bar and Bistro.

During the Thanksgiving holiday Almond had another chance encounter with Wilson, whom he called Big Bird. After spotting Wilson walking down the street, Almond gave chase to catch up with his old friend.

“We caught up on everyone like always,” Almond said.

It was then Almond learned Wilson was staying in Badin.

Like with Williams and his friend Kendall, word of Wilson’s death hit Almond like a punch in the gut, too.

As of Friday the cause of Wednesday’s fatal fire in Badin remains undetermined, pending additional information.

Barham said he hopes to learn more about the origin of the 5 a.m. blaze by next week.

“I’m pretty confident with eliminating the heating system as the cause,” Barham said.

His conclusion, however, does not exclude a portable heater as a possible cause.

Barham declined to reveal where in the house the fire started.

He said he hopes to use family photos of the house’s interior to make comparisons before rendering a conclusion.

Last year, there was an extensive campaign in Badin to distribute smoke detectors. Records show that either the owner did not allow the installation or was not at home at the time, Barham said.

If there was a smoke detector already in the house, fire investigators have found no evidence of one because the ceiling of the home was destroyed in the blaze.

If anyone needs a free smoke detector including installation, they can call the fire marshal at 704-986-3650.