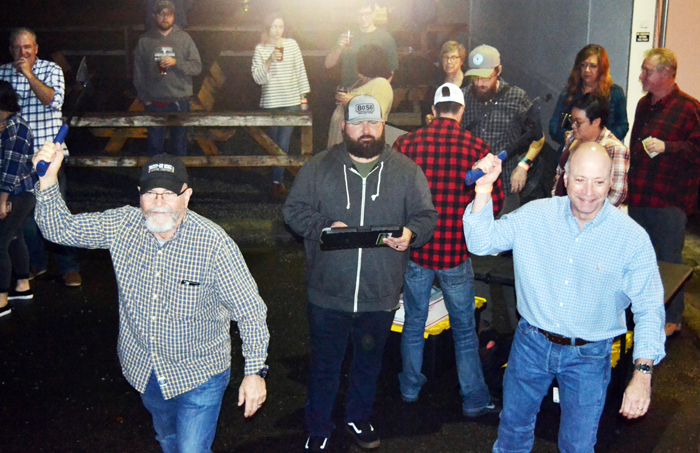 “Do you want to go throw some axes?” Kevin McVey recalled about a friend’s invitation.

Something about this masculine offer was enough to pique the interests of two buddies who reside in Locust. After all, who would not be intrigued at tossing sharp instruments into blocks of wood?

Axe (hatchet) throwing is the latest competitive craze popping up outside taverns. It’s like a game of darts on steroids.

Once McVey and Lankford partook in the experience an inspiration followed.

“We need to start a company,” Lankford said.

Axe throwing is already popular in places like Canada.

It’s not uncommon for bars to include competitive games, like darts, pool, foosball and cornhole.

“At some point someone had to pitch cornhole,” Lankford said. “At some point everything is new. But don’t you want to be the first?”

As a mobile setup, McVey and Lankford travel among various venues. Their roving setup consists of a semi-enclosed 12 feet by 14 feet, 9 feet tall, structure similar to a batting cage. The sides are made of wire mesh and a wooden frame. One end is open and where contestants hurl an axe at a wooden target with rings and a bullseye for scoring, similar to darts.

“We wanted something that looked good,” McVey said of the structure which takes about 30 minutes to both assemble and disassemble. 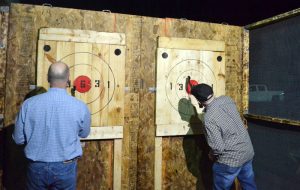 Two axe-throwing contestants retrieve their hatchets from the targets.

A thrower typically stands 12-15 feet back before making a toss. Ideally, an airborne axe will make only one rotation.

“It’s completely safe,” Lankford said. “When you’re throwing no one is in front of you. It’s 100 percent safe.”

Contestants throw from behind a designated line. Throwing an axe is similar to a baseball. A contestant steps into the throw, keeping the throwing arm straight and letting go of the handle when the arm reaches a 90 degree angle.

McVey and Lankford coach contestants on the art of throwing an axe.

“You’ve got to let the axe do the work,” Lankford said. “Once you learn the technique, the axe does the work.”

Despite their assurances of safety, booking gigs has been met with concerns, if not by business owners then their insurance carriers. Much of the concern derives from a potential mixture of flying axes and alcohol.

Safety concerns quickly nixed a scheduled event at Five Points Public House in Albemarle for its one-year anniversary due to safety concerns.

Instead of an establishment worrying about liability exposure, Southern Axecent is insured. Both McVey and Lankford remain engaged in the event, both coaching and supervising.

Between a new competition and its woodsy appeal, axe throwing is garnering newfound attention. 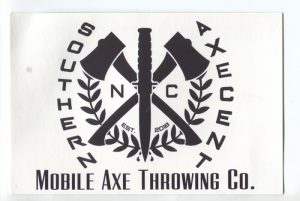 Southern Axecent wowed Monday night’s crowd at the New Year’s Glam Lumberjack Jam at Twenty-Six Acres Brewing Company in Concord. At one point early in the evening there were more people gathered around the outdoor cage than collected inside the bar.

Southern Axecent touts the sport’s team-building concept as it solicits for corporate outings as much as bar trade.

Private or corporate events typically cost $400-$600 for a 4-5 hour session. Or, Southern charges a contestant $10 to throw as many times as they want.

“It’s good to be mobile. If you’re having an event we can come to you,” Lankford said.