RPM Cycles honored as Regional Dealer of the Year 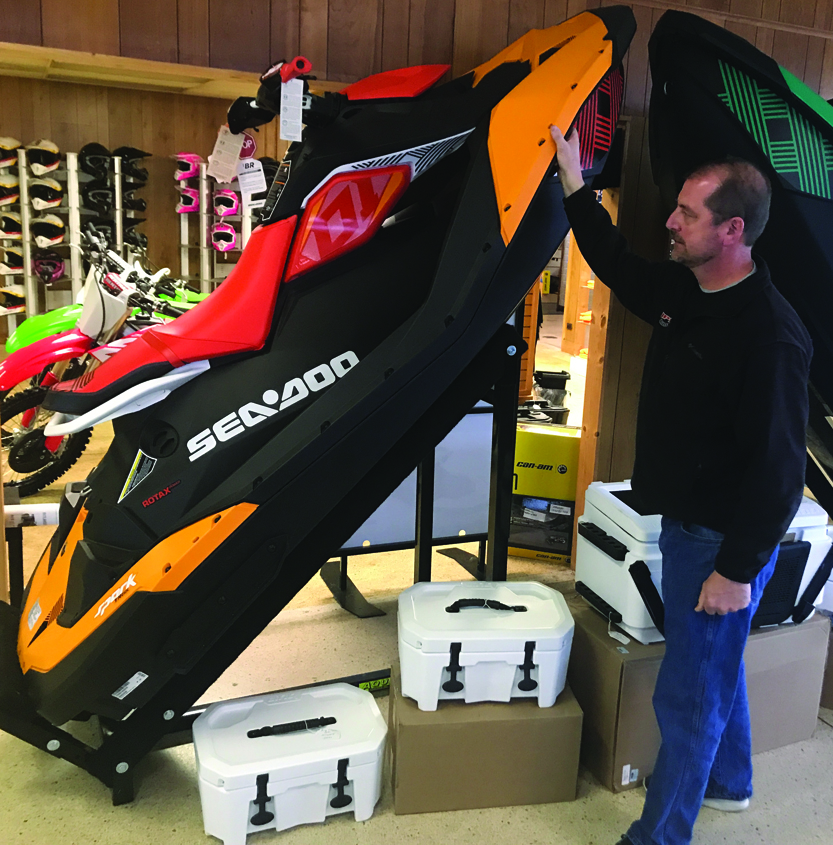 Photo by CHRIS MILLER/staff Rick Price admires his Sea-Doos at RPM Cycles in Albemarle. The company was recently honored for its performance.

RPM Cycles Inc was recently honored as the 2018 Regional Dealer of the Year for the Eastern United States.

The store sells a variety of Honda, Kawasaki and Can-am vehicles, including numerous motorcycles, ATVs and scooters, as well as Sea-Doo watercrafts.

The company won the awards for its Sea-Doos from Bombardier Recreational Products, a Canadian vehicle company that produces the Sea-Doos.

For owner Rick Price, the award shows RPM has made an impact in Albemarle — and beyond.

Every January, Price, 54, has a booth at the Mid-Atlantic Boat Show in Charlotte that’s twice the size of RPM’s showroom and word of mouth about his products has spread throughout North Carolina and the surrounding states, he said.

Besides selling his Sea-Doo watercrafts around Badin Lake and Lake Tillery, his reach has extended all the way to areas around Lake Norman, Lake James and Lake Gaston.

With the internet, RPM also does a lot of business in other states as well.

But selling vehicles was not Price’s first job.

Originally from northern Virginia, Price spent 25 years in the grocery business working for Giant Food supermarket. In 2005, Price quit his job and retired to Albemarle.

“I wanted to find a place to retire and get away from the Washington, D.C. area,” he said.

But in January 2006, Price combined his passion for motorcycles and his business background and opened RPM Cycles with his wife, Cheryl.

“Albemarle’s been real good” to us, he said.

Price said the 2018 award is based on five factors: number of units sold, growth year-over-year, percentage of market share, certification level (RPM is a platinum dealer, the highest level) and, most important to Price, the Customer Service Index, a survey sent to customers to measure their satisfaction with the dealership’s services.

Each quarter, dealerships start with a perfect 1,000 CSI score and can gradually lose points as customers find fault with any part of the service.

RPM has maintained a perfect 1,000, despite selling hundreds of units, he said.

But Price doesn’t feel the pressure of the CSI score.

For Price and his wife, RPM is more than just a company.

“For us, we are a family-owned and operated business,” he said. “The customers know us by name and we know them by name.”

His son and daughter also grew up working at RPM and they often come back to help their father at the Mid-Atlantic Boat Show.

Customers have become part of the family to the extent that Price often goes above and beyond for them. He has delivered products late at night on Christmas Eve and has done last-minute repairs to a watercraft the week before the Fourth of July in Lake Norman.

“We go the extra mile over and over again,” he said.