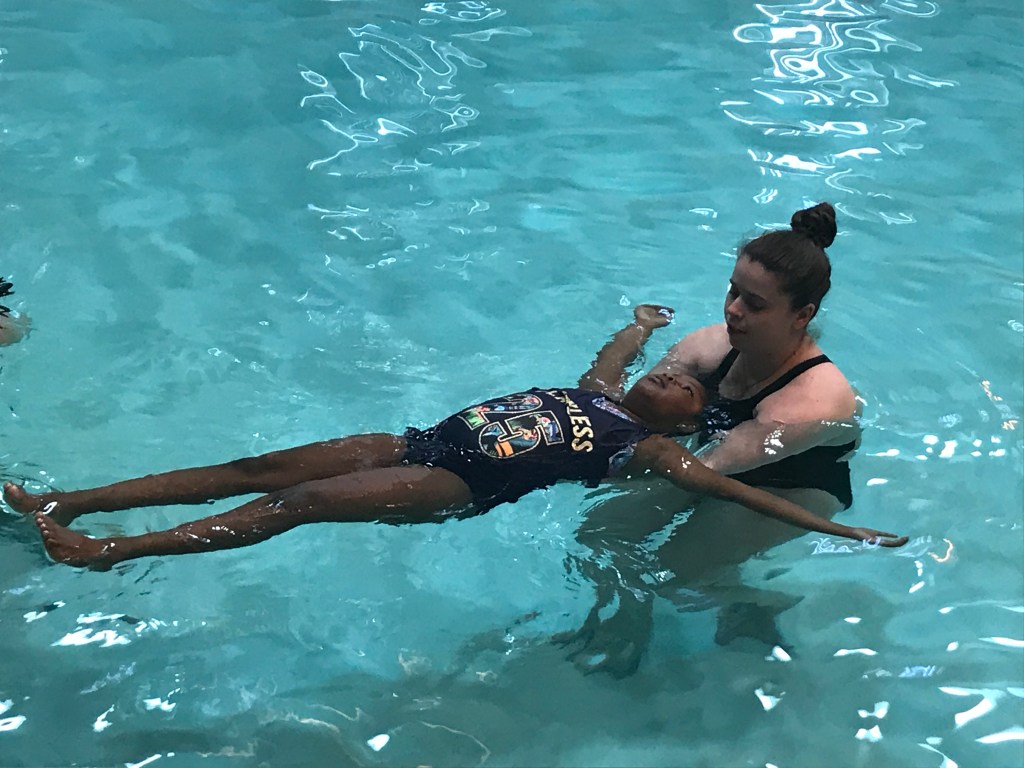 (Photo by Chris Miller/staff) Tybrianna Watkins, 7, learns to swim with assistance from instructor Emily James at the Stanly County YMCA.

Six children were at the YMCA Saturday morning participating in their first of eight swim lessons through a local foundation. When they finish, a new batch of kids will start.

Cassandra Harris looked on as her two children, Tyzyeioua and Tybrianna Watkins, both 7, were splashing in the water. She also hopes that with enough lessons, they, too, will learn to swim.

All of these swim lessons are fully funded by the Smith William Snuggs Endowment.

“This program will help save lives,” YMCA Aquatics Director and swim instructor Emily James. “We want the kids to know that it’s not just a scary pool, you can play in it, too.”

Lee Snuggs used a tragic event in his life to help better the lives of many young children.

Grief-stricken and overwhelmed with sadness, Snuggs, his wife Billie Jean and his son Witt were motivated into action and they channeled their energy into making sure this type of tragedy would not happen to other families.

Still in 2010, Snuggs, then 48, and his family, with the help of the YMCA, helped organize an event at Cannon Park to raise money. Local bands showed up, along with food vendors, inflatable bouncy houses and fire and rescue folks. Former Washington Redskins coach and NASCAR team owner Joe Gibbs would even send some of his racing cars to the park. Titled Smith Splash, the fundraising event happened every successive year and ultimately raised $100,000 by end of 2017.

Snuggs and his family even went to local YMCAs to talk about the Smith Splash.

“Everybody in the community pulled together,” said Snuggs.

The money goes into the Smith William Snuggs Endowment Fund and is used to help young kids scared of swimming learn how to swim. The program is named the Smith Snuggs Swim Lessons.

The children Saturday already had swimming lessons at the YMCA — all Stanly County second-grade students take swim lessons — but they still need additional help and guidance. Many of these children still do not know how to swim and are scared of water.

“You can’t learn to swim when you’re terrified,” said George Crooker, the YMCA chief executive officer. “If we don’t teach kids how to swim we are handicapping them.”

The children partake in a 30-minute swimming lesson with trained aquatics instructors followed by 15 minutes of free play.

Children also learn key safety tips like how to call 911 and throw a buoy in the water to rescue a friend.

Lee Snuggs and his family have also visited and talked with local residents — many of them parents who have also lost loved ones to drowning.

“There is nothing more horrendous in this world than the loss of a child,” said Crooker. “This family could…have been swallowed in self-pity or fear of depression, but they decided to go out and do something about it.”

The long-term goal is to make sure anyone in the community can have the opportunity to learn how to swim.

“Having a direction, a project, an event, something to work on, something to stay busy with, that…carries your name, your son’s name and a legacy has definitely been a source of strength and pride for us,” said Snuggs.

After working with the swim instructor, young Zaydon said that now swimming was only “kind of scary.”