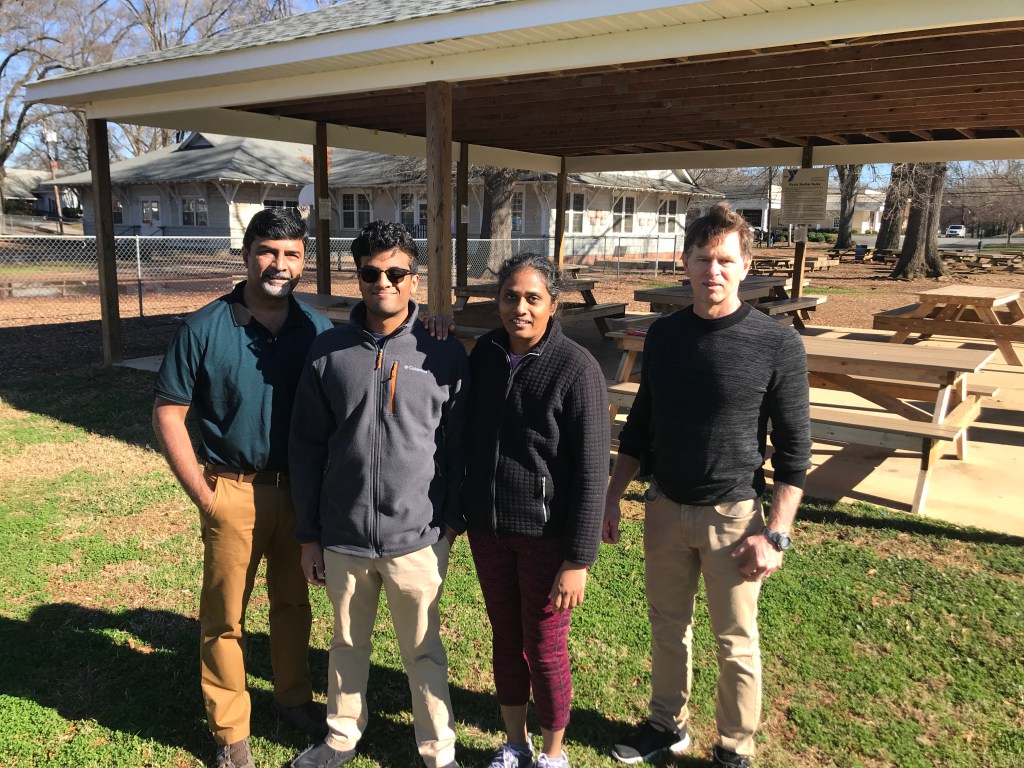 (Photo by Chris Miller) Suresh Sundaramoorthy, Aditya Suresh, Revathi Suresh and Lee Snuggs prior to the start of a project at the Cannon Park. Aditya is creating a walkway as part of his Eagle Scout project.

Seventeen-year-old Aditya Suresh is a high school senior on the precipice of graduating from Gray Stone Day School. He is also close to becoming an Eagle Scout, the highest honor in Boy Scouts.

Suresh is in Troop 82 and for his Eagle Scout project, he is about to finish a roughly 300-foot concrete walkway running from the bathroom to the Pavilion at Cannon Park, across from the Stanly County YMCA.

“The Eagle Scout projects in this park have been quite extensive and this one is proving to be equally as large,” said assistant Boy Scout Troop 82 leader Lee Snuggs.

Suresh has been working on the project for about six to eight months, he said.

The Albemarle community has helped Suresh with his project.

He first had to get approval from the YMCA, which owns Cannon Park, and then he got approval from both the Eagle Scouts Board and also the Stanly County Inspections Office.

Suresh received concrete from Dean’s Ready Mixed and got local concrete contractor Ken Horton to help pour the concrete. He also got wood from Lowe’s.

Anthony Efird is the excavator who will donate his time and equipment to help with the project.

The project was originally going to be gravel, but Suresh said that ultimately concrete was more accessible.

Suresh, Snuggs and many others will start building the walkway on Sunday and will hopefully finish by the beginning of next week.

Snuggs said the project is a “testament to Suresh’s stick-to-itiveness.”

Suresh wanted to help the park because the YMCA was a big part of his childhood. He used to swim there and hang with friends and he still exercises there.

“The troop has taught me persistence through everything,” he said.

“I’m really proud about his persistence,” said his father, Suresh Sundaramoorthy. “It was a really tough job.”

Suresh wants to become either an engineer or a computer scientist and would like to attend UNC Charlotte next year.