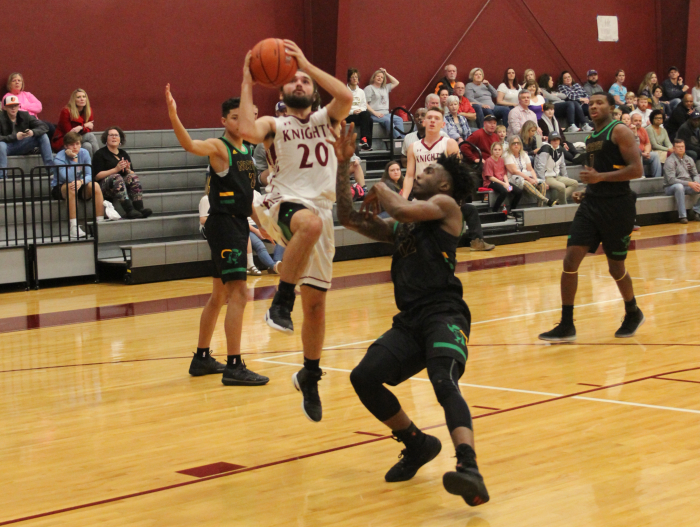 Visiting North Rowan opened the game with a 10-0 run and never looked back, earning a 66-29 win at Gray Stone Tuesday night in YVC men’s basketball action. 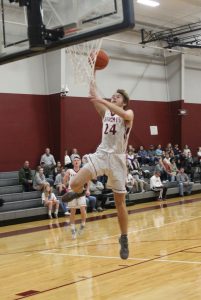 Gray Stone’s Marshall Overcash goes up for a dunk in the first quarter of the Knights’ game Tuesday versus North Rowan. (Photo by Charles Curcio)

Brevin Goodlett and Dayjuan Cooke each scored 17 points to lead the Cavaliers (10-2, 5-0).

Kendrell Goodes sparked a 10-0 run 90 seconds into the game with a dunk for the Cavs; North Rowan built an early 12-3 lead midway through the period.

Gray Stone answered with a 7-2 push over the next minute, capped by a Marshall Overcash dunk.

North Rowan did not allow Gray Stone to score for nearly six minutes in the second quarter, outscoring the Knights 9-0 over the span. The Cavaliers outscored Gray Stone 15-4 in the period to lead 35-11 at halftime.

The Cavaliers scored the first 15 points of the third quarter before the Knights answered with seven in a row. The visitors led 50-18 after three quarters.

Cooke’s offensive rebound and stick back with 4:59 left in the fourth quarter started a running clock for the remainder of the game.