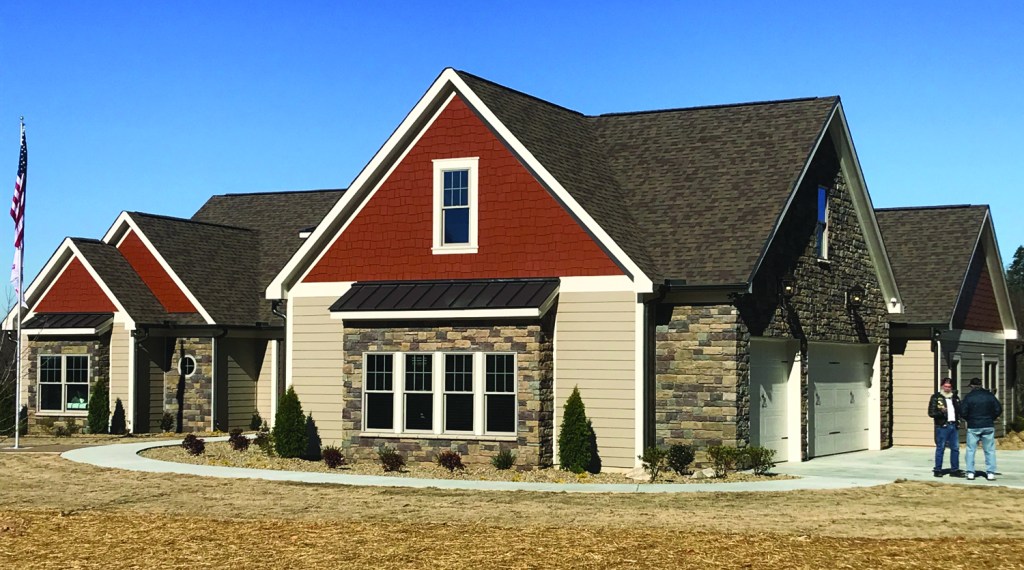 Tyler Jeffries and his family just moved into his new smart home in Stanfield. (Photo by Chris Miller/staff)

With John Mellencamp’s “Ain’t That America” and Kid Rock’s “Born Free” music reverberating throughout a heated tent with more than a hundred smiling, happy people in attendance on a frigid Thursday morning in Stanfield, after 22 months of waiting U.S. Army Spc. Tyler Jeffries, his wife Lauren and daughter Ella were officially home. 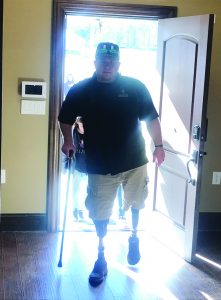 Tyler Jeffries takes his first steps into his new home.

Tyler, 29, was given the keys, or rather, an iPad, to a specially adapted smart home — also called a forever home — from the Gary Sinise Foundation, which works with injured soldiers.

Under its RISE (Restoring Independence and Supporting Empowerment) program, the Gary Sinise Foundation builds specially adapted smart homes for severely wounded veterans and first responders around the country. It constructs unique, one-of-a-kind homes for each wounded hero and their family.

Tyler said it was “one of the happiest moments of my life” when Gary Sinise called him to tell him he would receive a smart home.

“It’s so inspirational to see everyone coming together to help Tyler,” said Chris Kuban, a spokesman for the foundation.

Originally from Florida, Tyler moved to Cabarrus County when he was 19.

He joined the U.S. Army in 2010 and was deployed to southern Afghanistan in 2012. Seven months later, while on foot patrol, he stepped on an improvised explosive device (IED) and lost both his legs. Christopher Cunningham, his team leader and friend, ran to Tyler and rescued him.

“I thought my life was over,” said Tyler.

He was transported to Walter Reed National Military Medical Center. He spent 18 months in rehab where he pushed himself each day. He took his first steps on his prosthetic legs only 44 days after injury.

Even after he learned to walk again, life was still tough.

“I was down on the world,” he said. “I didn’t want anything to do with anybody. I was just angry…It took me a while to get over that anger and to want to push forward and want to accomplish something with my life.”

He said Lauren and Ella gave him a purpose and made “everything worth living again.”

Tyler actually proposed to Lauren in Kennebunkport, Maine, at a meet-and-greet at President George H.W. Bush’s residence. The president and his son, President George W. Bush, were both in attendance.

Emotions were high as Tyler and his family walked into their new home for the first time. The home is in a secluded part of the country, surrounded by woods, rolling hills and a giant field. Several Americans flags adorned the gravel driveway leading to the house.

He and his family had lived in Denton but moved into his mom’s home in Concord for the last two months.

“Having this house, something like this, it’s life-changing. It’s really the American Dream,” he said.

Tyler’s house is custom-made to his liking: he and his family chose the tiles, the wall paper, the paint — everything.

These smart homes “provide a safe haven for these heroes to reclaim their independence,” according to the Gary Sinise Foundation website.

Tyler’s entire home is controlled by an app that can be downloaded on a cellphone or iPad. With the push of a button, he can turn lights on and off, activate security, adjust the thermostat, etc.

His smart home has wide hallways to accommodate Tyler’s needs.

Tyler said he’s most looking forward to the shower. The bathroom has a shower transfer bench where he can sit and actually clean himself.

Tyler is also looking forward to his “man cave,” where he plans to spend time watching a lot of old war movies — especially his two favorites: “We Were Soldiers” and “Fury” — and playing “Call of Duty” and “Fortnite” on his X-Box.

“It’s been a learning environment,” Lauren said about their new house.

Calling their old non-ADA home in Denton “frustrating,” Lauren said “now he’ll be able to do everything and he will have that independence and freedom.”

Except one thing: “He’s not going to do laundry,” Lauren joked.

Though Sinise was not at the event, he wrote a letter to Tyler telling him he looks forward to visiting in the future and “perhaps do a little fishing.”

Among the guests who showed up to welcome Tyler home was Cunningham, who traveled from Massachusetts.

Tyler is working on ways to help other veterans, including starting a nonprofit to take wounded veterans to Jupiter, Fla. to go deep-sea fishing.

Seventy RISE smart homes will be either completed or underway by the end of this year, said Kuban.

The Gary Sinise Foundation was created by the actor most famous for playing Lt. Dan Taylor in “Forrest Gump” and Ken Mattingly in “Apollo 13.”

Tyler’s favorite quote is, “One day your life will flash through your eyes, make sure it’s worth watching.”

Tyler’s clearly will be.