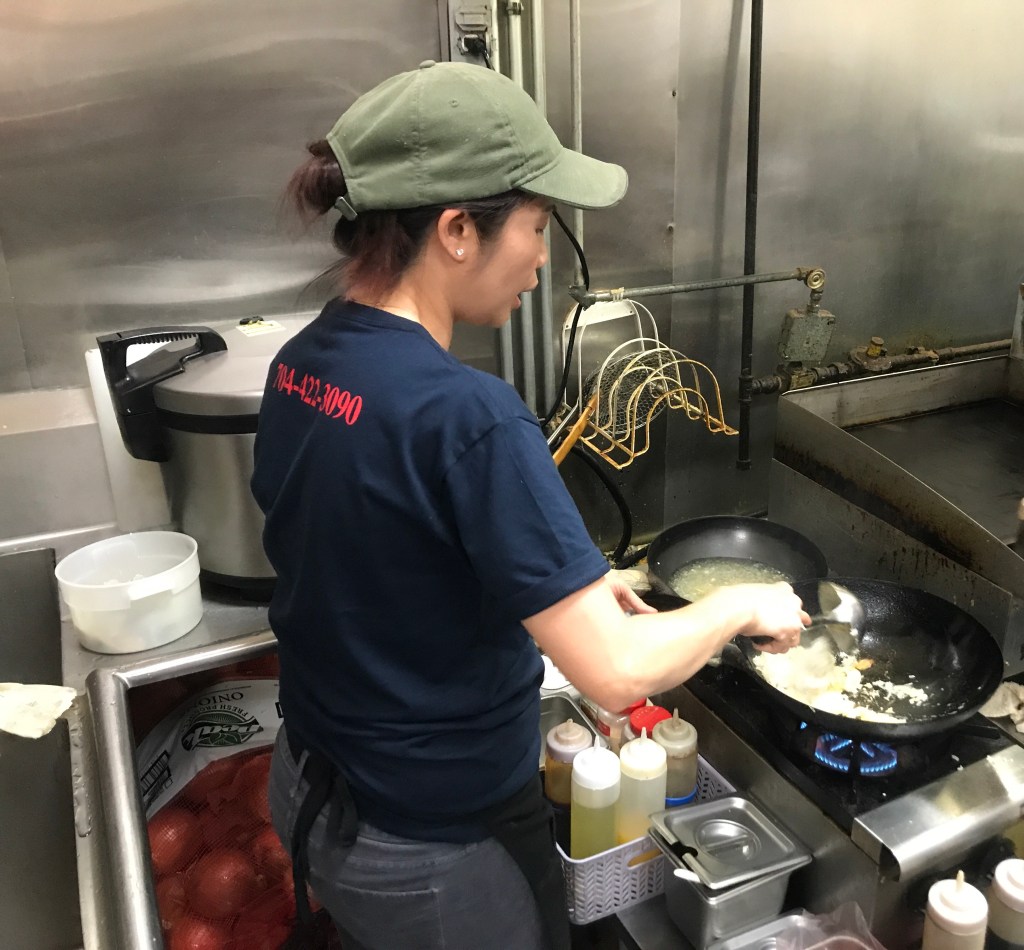 Phoudone Naovarath, 46, cooks a meal at Tho Pizza and Hut Subs, a restaurant she runs with her husband, Tho.

Late night visitors to Tho’s in Badin may be a bit confused by the recorded voice from the kitchen asking, “Who is the father of our country?”

Along with the acclaimed Asian food, flounder sandwiches and pizza, restaurant owners Tho and Phoudone Naovarath have been serving up a side of American history as they study to take the U.S. Citizenship test in late January.

Phoudone and Tho own and operate Tho Pizza & Hot Subs in Badin and after they get off work each night, they practice for two hours for their test. Phoudone’s two high-school-age children from her first marriage, Terrence and Tera, ask them practice questions each night.

The couple first applied for citizenship about seven months ago and they also hired a local immigration lawyer to help them fill out the necessary forms.

There are 100 civics (history and government) questions on the naturalization test. During the interview with the United States Citizenship and Immigration Services (USCIS) officer, Phoudone and Tho will be asked up to 10 questions of which they must correctly answer six to pass the test.

Tho takes his test Jan. 22 and Phoudone takes hers two days later, both in Charlotte.

Originally from the Southwest Asian country Laos, Tho and Phoudone both came to the United States in the early 2000s and met at a Buddhist temple during a Fourth of July celebration in Washington, D.C. in 2006. Tho was already living and working in Stanly County while Phoudone and her two children lived in Philadelphia.

After talking on the phone for many years, Phoudone and her children moved to Albemarle in 2015 and she married Tho the same year. In January 2017, Tho and Phoudone opened their restaurant.

Phoudone, 46, had thought about applying for citizenship for years in Philadelphia.

“I was just busy and I didn’t know how to apply and my English wasn’t good then,” she said.

In the midst of getting ready for their citizenship test, Tho and Phoudone are running their restaurant seven days a week. They both cook the food while their daughter Tera takes orders.

“They put a lot of work into making the food look good and taste good,” said Tera.

“They’re a delightful couple,” said former state senator Gene McLaurin, who enjoys visiting the restaurant whenever he’s in Badin visiting family. “It’s great to see folks excited about becoming citizens. It’s been a joy to get to know them.”

Phoudone enjoys small-town life in North Carolina, especially compared to the hustle and bustle of Philadelphia.

“I don’t like the big city,” she said. “I like the quiet and all of the trees in the small towns.”

And what happens if Phoudone and her husband pass the citizenship test and become U.S. citizens?

“It will make me so happy,” she said, with a huge smile radiating across her whole face.