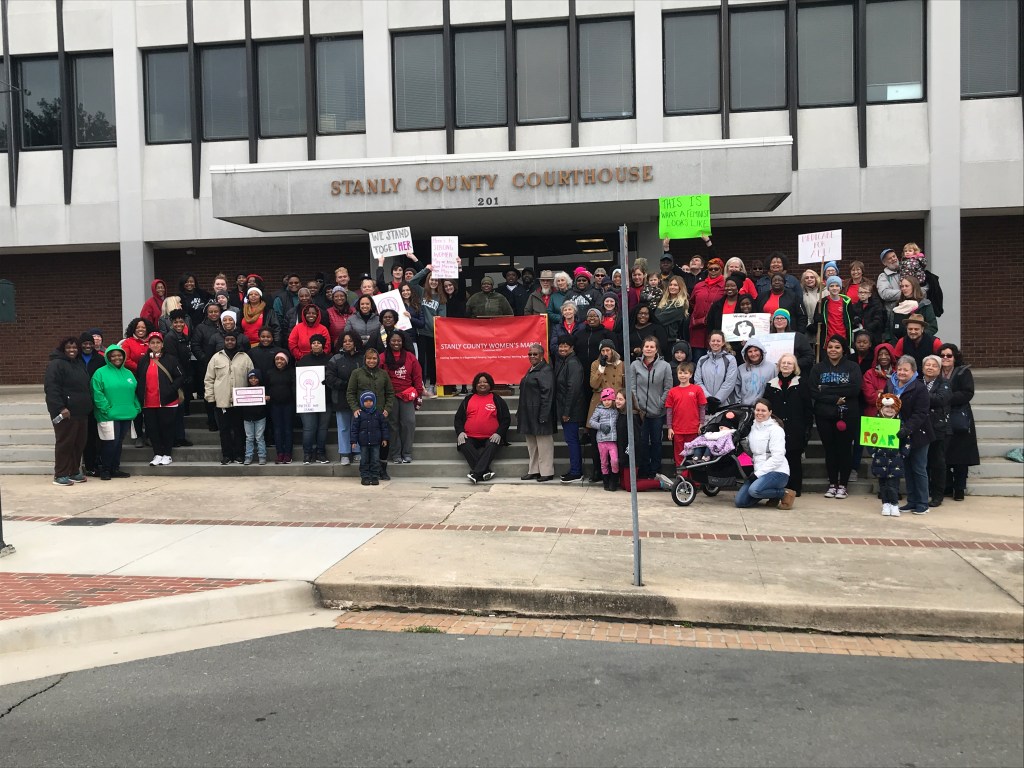 All the participants of the inaugural Stanly County Women's March gathered along the steps of the Stanly County Courthouse after the last speaker finished speaking.

More than 150 people came out Saturday morning to learn, laugh, think and feel inspired during the Stanly County Women’s March.

The march was spearheaded by Tomeika Baldwin, a special needs teacher at Aquadale Elementary School. She also leads a group called Youth in Action.

Inspired by the women’s marches she attended in Raleigh and Charlotte, she said wanted to do something local. So Baldwin worked to create an event in Stanly County that would inspire and unify people to come together.

She met with about a dozen other committee members once a week for about a year to create the march.

“The purpose of this event is to bring everyone together regardless of your race, age and gender,” said Baldwin. 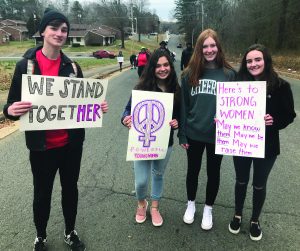 The program started at the E.E. Waddell Community Center at 9 a.m., where a host of different informational booths were set up for the community.

Various groups from around Stanly County were in attendance.

Debbie Bennett, of the Stanly County Health Department, had a booth to promote the department’s many programs for women, including its Maternal Health Clinic Family Planning Program, Breastfeeding Peer Counselor Services and its Women, Infant and Children program.

“We hope women will be more aware of the services available to them at the Health Department,” Bennett said.

Angela Morgan, committee chairwoman of the Little Black Dress Scholarship, also had a booth to spread information about the scholarship which is available to anyone in the area and works to uplift and empower students.

Four Gray Stone Day School students, who are part of the Teenage Democrats club, were inspired to come out.

Macy Abramson walked in a women’s march in Charlotte a few years ago and was excited to be part of this one.

“I’m here to relive that experience,” she said. “I felt so empowered and I had a drive to stand up for what I believed in.”

The students — who came with signs including “Better Education=Better Future” and “Strong Women will change the world” — are passionate about equality for women and seeing more women included in U.S. government.

Many men were also at the event.

Tomeika’s son, Rashaad, was at the event to support the women. He said men have to stand with women and support them.

“I hope they keep this event going every year,” he said.

At 10, the six speakers spoke about their respective topics.

Trina Fonville, who represented Senior Benefits Care, spoke about the importance of people knowing their Medicare and Medicaid benefits.

“We educate the citizens on benefits that are available to them they often had no idea about,” she said. “We’re here to conduct a benefits analysis to help determine what type of benefits people with both Medicare and Medicaid can qualify for.”

“Diversity ensures that every voice is taken into consideration,” she said. “It doesn’t matter their background, everyone has a voice.”

Brenda Stanback emphasized the importance of not just registering to vote, but about going out and actually voting. She said even 16-year-olds can register to vote, as long as they turn 18 by the next general election.

Fredia Owens, a program coordinator for a youth nonprofit called DASH (Developing Adolescence and Strengthening Homes), spoke about the need to make sure kids stay in school and make better choices, to avoid ending up at the courthouse or in jail.

Agnes Maske spoke about the importance of education and how every person depends on others.

“It takes a village of togetherness to make a difference,” she said.

Dr. Jenny Hinson, a pediatric internist in Albemarle, spoke about how heart disease is the No. 1 killer in women and that life expectancy has decreased the last three years. A key reason, she said, is the deaths of young people due to suicides and opioid addiction.

“Addiction is not a stigma,” she said, “it’s an illness.”

She also mentioned the value of expanding Medicaid.

After the speakers, the crowd left the community center and marched (or rode in vans) from Wall Street to Martin Luther King Jr. Drive to the Stanly County Courthouse.

“We’re all given different gifts,” said Albemarle Mayor Pro-Tem Martha Sue Hall to the crowd at the courthouse. “We’ve got to determine what gift is ours, claim it and go forward.”

The keynote speaker for the march was Cyndi Griffin, a retired paramedic, who is currently a real estate broker in the area.

She spoke about how women are marching for a host of reasons, including economic workplace inequality, equal representation in government, equality in healthcare and for inequalities in the criminal justice system.

“We want to change a basic culture that disenfranchises women,” she said.

She added if women in the past didn’t march, the 19th Amendment giving women the right to vote and the Civil Rights Act of 1964 wouldn’t have been created.

“Is there anything great that can come out of Stanly County?” she asked again. “Yes” the crowd answered a little louder.

“Is there anything amazing that can come out of Stanly County” she asked one more time. Again the crowd emphatically answered “yes.”

“Sure it can,” Watkins said, “and this, my friends, this is how we Make America Great Again.”