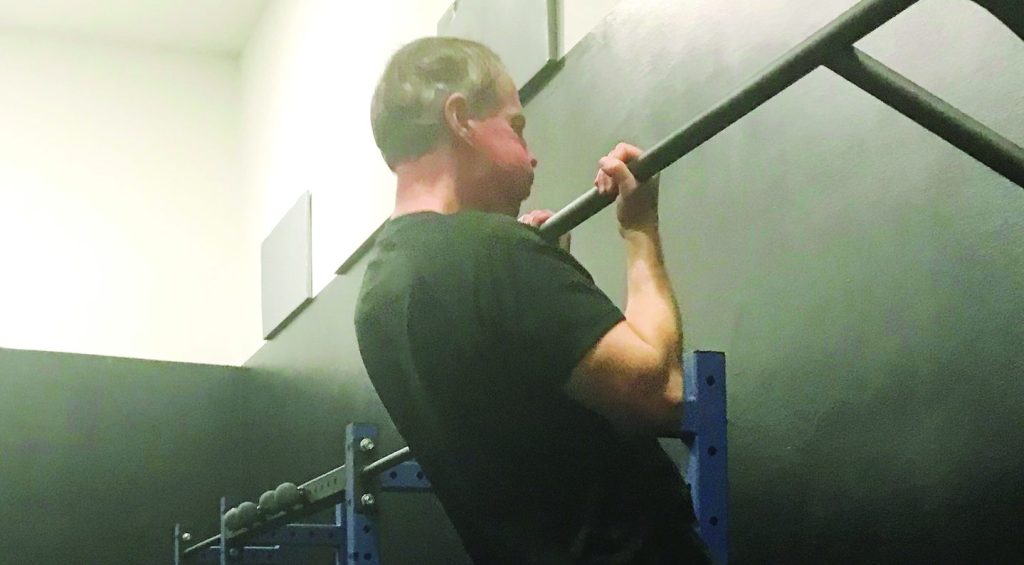 Photo by TOBY THORPE Crawford Rippy does chin-ups during an early tour of the Raptor Room.

The “Raptor Room,” a repurposed racquetball court so named due to a donation from the Raptor Blind Company, will house classes in what Fitness Coordinator Derrick Almond describes as “functional training methods,” as well as being available for use by individual members when not occupied by groups.

“Functional training incorporates High-Intensity Interval Training (HIIT), with weights, bumper plates and other equipment,” said Almond, who described the concept as being very similar to the “cross-fit” model.

“The program will include aspects of TRX (Total Body Resistance Exercise) training, which relies on the participant’s body weight, with added resistance provided by using equipment such as dumb bells, kettle bells and bumper plates,” Almond noted. “Equipment from our current TRX exercise room will be added into the Raptor Room, which will enable us to hold other classes (TRX, weightlifting, athletic conditioning, etc.) there as well as the HIIT classes.”

Almond also noted once equipment is moved from the existing TRX room, that area will be converted into a cycling studio.

The entire project is part of the YMCA’s aim to provide its members with the best possible opportunities for maintaining a healthy body, mind and spirit.

“We want to offer our members as much as we can with the space we have,” Almond said. “We had requests from members to offer these types of classes, and I went and visited other facilities to see what they had so that we could determine what would work best here. I found that other YMCAs had converted racquetball courts to HIIT training centers.”

But would the Y’s racquetball enthusiasts accept the prospect of giving up one of the two available courts?

“We monitored usage of the racquetball courts, and we found that participation has been declining,” said Almond. “On a ‘busy’ day, we would only have four to eight people playing, so we surveyed those members who use the courts and they were agreeable with us changing one court over,” said Almond.

For some, the “High Intensity” part of the class description may seem a bit intimidating. But, according to Almond, those who want to try a new type of fitness experience should not let that deter them.

“We can make modifications in all our classes to allow for participants who might be just starting, or whose age or physical limitations require they work at a lighter level,” said Almond, giving an example of lifting only a bar rather than a fully weighted barbell.

“In addition, we will require all HIIT participants to go through two introductory classes,” he said. “The purpose of the intro class is to teach the proper form and the safe way to do the exercises before we add weights and increase intensity.”

Preparations for the opening of the room and classes will continue through January, says Almond, who noted the Raptor Blind logo will be emblazoned on the wall within the room to commemorate the company’s support.

“Raptor Blind builds blinds for deer hunting, and I had the opportunity to work with its owner in some physical training classes,” Almond said. “He was very generous in making the donation to enable us to implement this facility and program.”

For information on upcoming classes, contact the Stanly County Family YMCA at 704-982-1916.