Oakboro students use virtual reality, robotics to learn (and have a little fun) 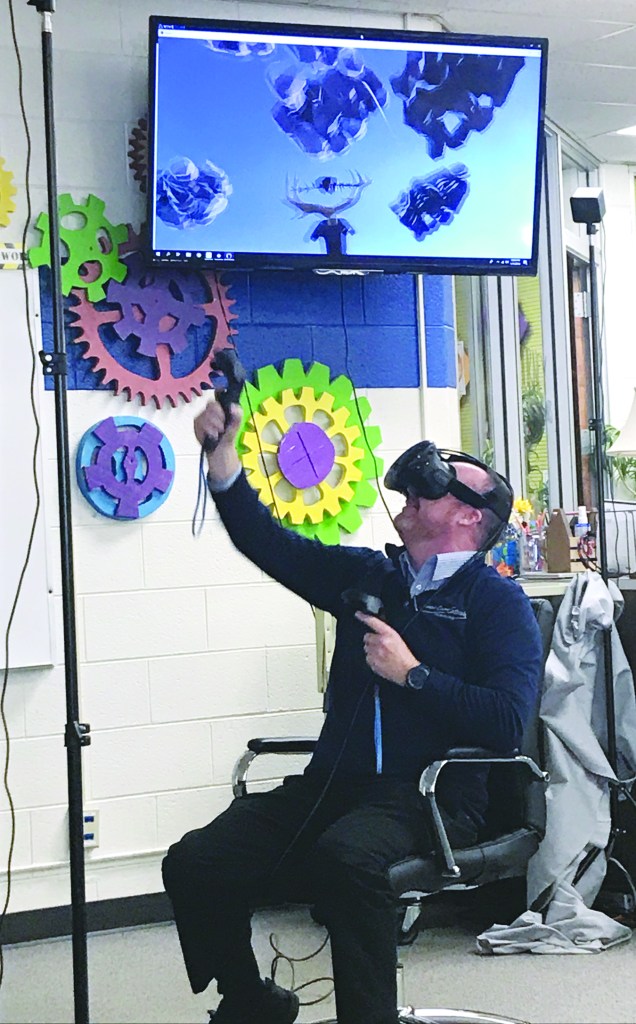 The STEM (Science, Technology, Engineering and Mathematics) students at Oakboro Choice Stem School are having fun.

Besides getting to build and play with many high-tech robots, the school recently purchased a Virtual Reality System — referred to as the HTC Vive.

The school has a virtual reality headset with two remote controls and a specially designed gaming computer. The total cost of the virtual reality system was about $1,600, but it was paid for by the West Stanly Rotary Club.

It all started when school STEM coach Jennifer Snyder visited UNC Charlotte and was inspired by its virtual reality technology. 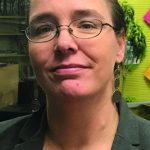 “It was a wish list gift that I never in a million years thought we’d get,” Snyder said.

Students put on the virtual reality helmet and are then completely immersed into new environments and new worlds.

At a noon unveiling of the new technology Friday, principal Kelly Dombrowski was seated with the HTC Vive headset on, holding the remote controls as she was partaking in a virtual roller coaster ride alongside Santa Clause.

Stanly County Chief Technology Officer Shawn Britt was transported into a fantasy world in a game called Found, where he was using a slingshot to shoot at various objects, including a flying dragon.

Members of the audience could watch a TV screen above the participants that showed what they were looking at while wearing the helmet.

“It felt like I was really using a sling shot,” Britt said. “Even the tension of pulling the sling shot was so real.”

Whether looking up, down, left or right, only the virtual world can be seen when wearing the helmet.

Snyder has workshops each day in the morning where she teaches students how to use the robots and the virtual reality equipment.

“We’re trying to get it into the hands of the students as much as we can,” Snyder said. “They’re less scared of the technology.”

With the VR technology, the kids can be taken anywhere — to space, to the oceans, into the human body.

For math, they can manipulate different variables and visually see the math at work.

For social studies classes, students can use programs like Google Earth to travel to Egypt to visit Nefertiti’s tomb or the Great Pyramids, or they can be placed in the trenches during World War I.

In some classes, students are creating virtual reality spaces. Middle school students, for example, are about to create different planets found in the children’s book “A Wrinkle in Time.”

Snyder is looking into acquiring a Green Screen so students can create even more realistic virtual reality.

“History can come alive rather than reading about it on some static piece of paper,” said Snyder.

“Since we are a rural county, it gives the students a chance to maybe go some place they’ve never gone before,” she said.

As far as Snyder knows, this is the only K-12 school in the region — including other Stanly County schools along with Cabarrus and Mecklenburg counties — that has this technology.

Dombroswki is thrilled that her school has this technology.

“I think it’ll be wonderful to expand their minds and take them out of Oakboro,” she said. “It’s great to pique their interests and then expand on it—while also sneaking in some learning.”

Gabe Stiller is an eighth grade student who is from the first graduating class of what Snyder calls Master Makers. He knows how to use every piece of technology in the STEM lab and can help the teachers or other students if they’re confused.

Stiller has always loved technology. He has been working with computers since he was 5.

He regularly helps other students navigate the VR headset.

“You can put on a headset and experience something with your eyes that a lot of people our age can’t experience,” Stiller said.

Besides the VR technology, there are plenty of really neat robots and other forms of technology in Snyder’s STEM lab.

Snyder is writing a grant for a new sewing machine because many young male students have enjoyed learning how to sew.

Sixth and seventh grade students created a sweatshirt that would amplify the voice of a soft-spoken person, Snyder said. It was part of a project to design something that would help people.

There is also a STEM library called littleBits, where students can play with pieces of a deconstructed computer.

“The robotics program is something I’ve always thought we should do because so much of everything we do in our world is technology based,” Snyder said. Even the kindergarten students are learning how to code.

VR and robotics help students in variety of ways including with their math skills, verbal skills, problem solving, collaboration with other students and communication.

“This is the wave of the future,” said Dombrowski.