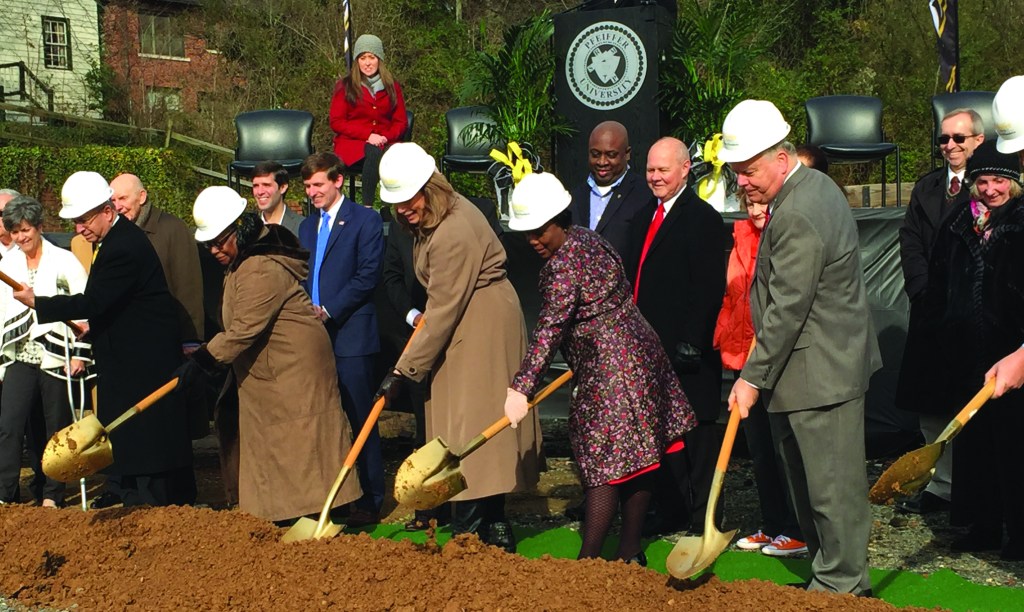 Shortly after 10 a.m. Thursday, the earth will move in downtown Albemarle.

One of the most anticipated groundbreakings in the history of the city will take place when more than 200 people are expected to attend the official ceremony to begin construction of the Pfeiffer University Center for Health Sciences.

“Pfeiffer had the opportunity to put this building anywhere,” Pfeiffer President Colleen Perry Keith said of the center at 245 E. Main St., Albemarle. “We chose to come to Albemarle because of the importance of the town-gown relationship to us: we are committed to working within our home county to develop partnerships that benefit all of our students – including those on our Misenheimer campus – while at the same time benefitting our community and our local economy.”

The total cost of the project, which includes furnishings and equipment, is $16 million. The economic impact and potential to revitalize and remake downtown Albemarle will be much more valuable

The total economic impact of the building will be more than $136 million over 10 years, according to Mark Donham, director of economic development for the city.

The new building and the students that come with it will be a major revitalization to the city, especially downtown, Mayor Ronnie Michael said.

Michael said he heard from people who have called this revitalization the “Pfeiffer Effect.”

“The project is a potential game changer due to the multiplying economic impact of having hundreds of post-graduate students living, learning, eating and socializing in downtown Albemarle,” said Matthew Swain, chairman of the Stanly County Board of Commissioners.

One upcoming boon will be the transformation of the Albemarle Hotel — which was purchased by Albemarle Hotel Development, LLC at the end of 2017 — into several apartments and retail shops. The idea will be for the apartments to open around the same time the Health Sciences building opens, which is planned for May 2020. Around 200 graduate students a year will occupy the downtown campus.

“You’ve got to have people downtown at night to make a vibrant downtown,” Michael said, adding that the addition of the Health Sciences building will only enhance it.

The city is excited to have a different demographic group move into the downtown area.

“Not only will the building of the campus be an asset as it adds to our tax base and brings a new look to downtown, I expect it will bring a whole new clientele that our downtown doesn’t regularly see,” said Pfeiffer alumnus Joy Almond, Main Street Manager and director of Albemarle Downtown Development Corporation.

Lee Allen, broker and owner of Re/Max Town and Country, said he recently sold a house on Pee Dee Avenue the owners are turning it into a bed and breakfast because it is within walking distance to the new campus.

The goal is to create an environment for the students — and anyone living downtown — where they could live downtown, shop downtown and go to class downtown, Donham said.

Pfeiffer is putting together a focus group of prospective students and groups to identify what services they would like to see in downtown Albemarle, in terms of shopping, eating, etc. The city is helping with the focus group.

Once the city finds out the needs of the students, it will try to match those needs with the current services offered by downtown businesses, Donham said. If there are certain student needs the existing businesses cannot provide, the city will target outside companies to move into downtown. The city is also looking into what students living in Misenheimer might want from the downtown area.

The city is also working on identifying which downtown buildings are realistically available for new businesses, Donham said.

There’s going to be a specific demand for “college-age food” downtown such as pizza, ice cream and burgers, Allen said.

Many see this partnership as a transformation from an Albemarle that was based around textile mills to one that can now cater to a vibrant medical and intellectual community.

“By partnering with Pfeiffer, we have the opportunity to transform ourselves from a city that has lost a great deal of its industrial base to an academic community,” said Albemarle Councilman Chris Bramlett, a trustee emeritus of Pfeiffer.

The new Pfeiffer building will “be a draw to our area as a medical community,” Donham said.

He added the students will be able to utilize many of the existing medical facilities around the downtown area.

The Health Sciences building will be home to the new physician’s assistant and occupational therapy programs. Twenty-four new students are expected to begin the Pfeiffer’s PA program in January 2020 at the Misenheimer campus and will move to the Albemarle location once its ready.

“We are thrilled to see that shovel hit the dirt Thursday morning,” Almond said.