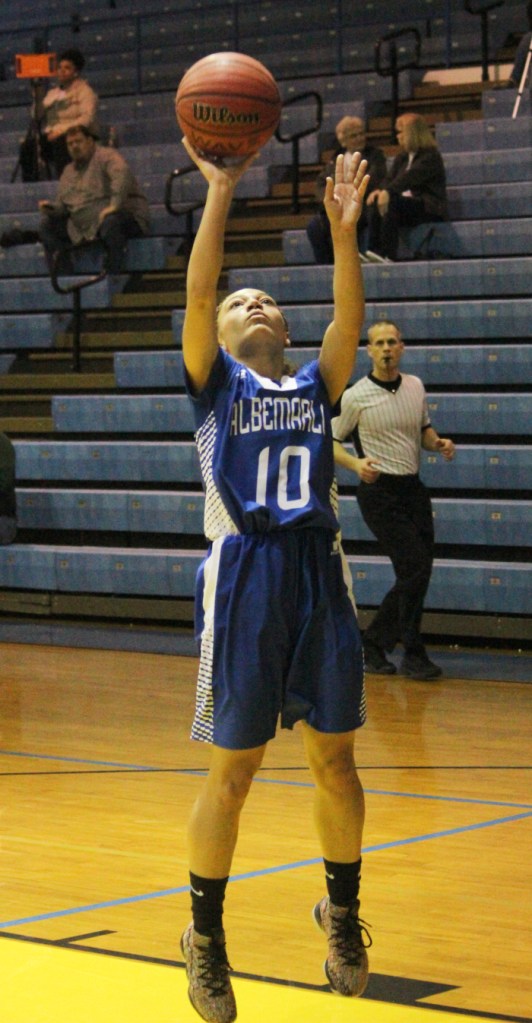 The first five minutes of Friday’s Yadkin Valley Conference women’s basketball game at Albemarle High resembled the recent political climate in Washington. Both squads attacked the other aggressively, with neither willing to compromise whatsoever.

The result? No progress at all (score-wise at least), until North Rowan’s Hannah Freeman swished a free throw with 2:43 remaining in the first quarter to put her team in front. At this point, the scoreboard operator was finally able to get to work.

And so did the teams. The remainder of the contest saw the home squad make a strong second quarter run to gain control, while using a full-court trapping defense to hold off the visiting Cavaliers en route to a 54-39 win.

“This was quite a battle,” said AHS coach Eric Davis following the game. “We’re pretty strong defensively, and our girls stepped it up tonight when they had to.”

The early 1-0 North Rowan lead lasted exactly 30 seconds. Tameya Newton put Albemarle in front with a 3-pointer from the right corner at the 2:13 mark, after which the Bulldogs never trailed again.

Leading 7-2 after one period, Albemarle made an 8-2 run to start the second quarter, then saw Dashada Wall go on a 7-point tear in the final 80 seconds of the half to boost the home squad to a 27-12 lead at the break.

Third quarter play saw North Rowan pull to within 12 at the 4:43 mark, but AHS outscored the Cavaliers 9-1 over the final four minutes of the third quarter, including a five-point run-in-19 seconds by Wall. AHS held a 39-19 advantage with eight minutes left, essentially putting the game out of reach.

The Bulldogs, playing without senior guard Zycoria Tillman (whom Davis expects to be back in the lineup on Tuesday), also saw guard Armani Baldwin head to the bench with an ankle injury midway through the third.

“Dashada (Wall) played an outstanding game,” said Davis. “And we were finally able to get into a rhythm after the shots weren’t falling in the first quarter. The main thing is, we finished strong.”

Wall led all scorers with 22 points while Krystin McLendon added 11 for the Bulldogs. Wall had eight rebounds and four steals in the game. Kiana Ridley had nine points and led Albemarle with nine rebounds and added four steals.