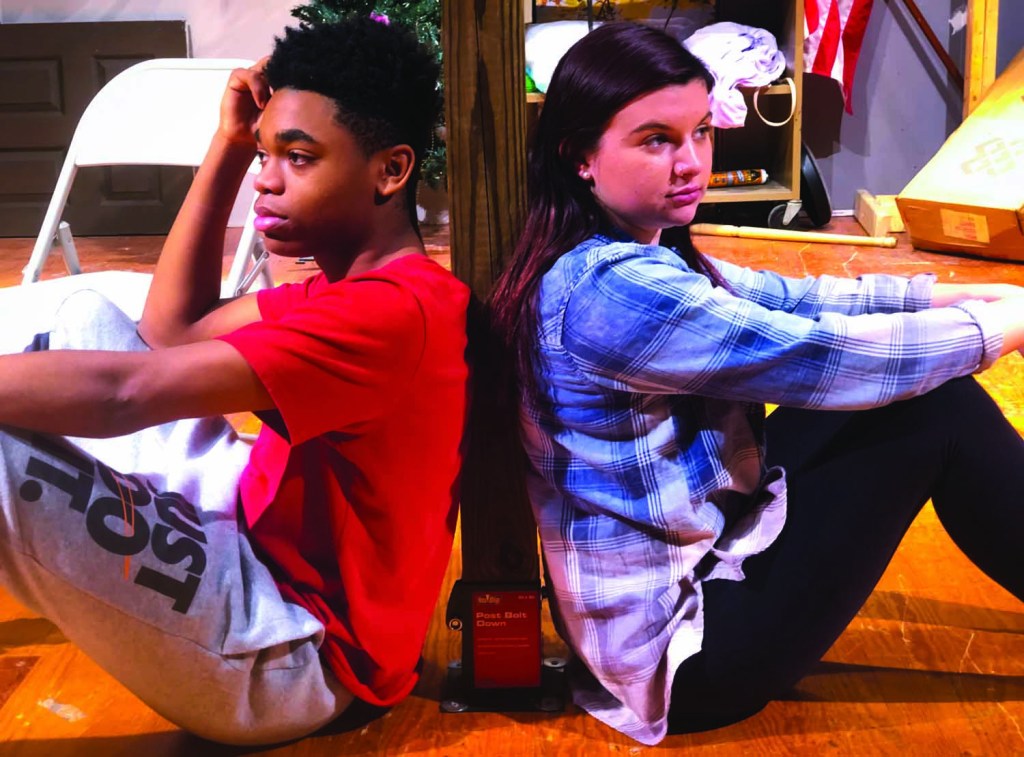 Contributed Malachi Gatewood and Megan Smith rehearse a scene from “Stuck; A Love Story.” The play written and directed by Albemarle High teacher Chuck Carte will be presented at 6:30 p.m. Thursday at AHS.

Chuck Carte has been working to build the drama program at Albemarle High School over the last few years.

Carte will bring forth some of his inner thoughts when “Stuck; A Love Story” is presented at 6:30 p.m. Thursday at the high school.

The English and drama teacher wrote the play. He also directs. 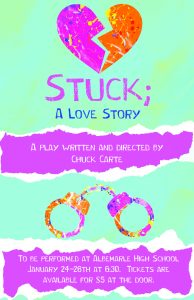 “The play is about a couple that hits a rough patch and has to figure out where they go next,” Carte said. “The whole play is set in their basement, which serves as a sort of court of appeals for their relationship by dragging, in almost a Dickensian effort, the past, present and future of their lives together.”

“I came up with the idea while I was doing improv with some friends and it just stuck as an idea I could run with,” Carte said. “I started the play in 2011, but never finished and I’m glad that I waited. The idea was for it to be a two-person short play, which didn’t work. Writing it for our stage allowed me to see past the two main characters and draw on my students themselves as part of the inspiration in writing a full story around a cast instead of just two people.”

He is glad he waited to use this cast for the play. He points out several new and returning students for making the play work.

“It’s been really fun to get to work with new students like Malachi Gatewood, who stars alongside Megan Smith (who is a returning theatre student) as the leads,” Carte said. “It’s been really a great experience working with students I have directed in the past as well in other productions, including LaDarius Henry, Summer Thompson, AnnaMarie Trzil, Morgan Billings and Karmalana Wilder.

“Everyone has grown so much as performers and I am so proud of them,” he added.

This play marks the fifth one Carte has produced at AHS, and he says more are on the way.

“I have had the same production staff for the last four plays, headed by Isaiah Stockdale and Charlie Starnes,” he said. “Isaiah will sadly leave us before this play is performed when he moves with his family back to New York. The cast and I will miss him greatly as he and Charlie both have been instrumental in the success we have had.

“Our goal at AHS is to carve out an identity and a reputation for doing unique and quality productions,” he added. “My earnest wish is to be able to showcase the variety of talent that is at AHS and show our community the best of what we have to offer in the arts.”

Tickets are $5 and available at the door.