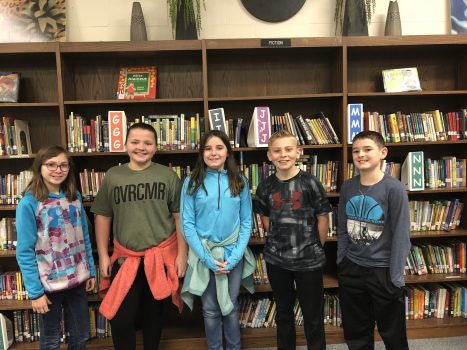 Twenty-one students from six Stanly County schools were recently announced as district science fair winners and will compete at the regional fair Friday and Saturday at the University of North Carolina at Charlotte.

Five fifth-graders from Endy Elementary School were among the winners.

Ashton Jamar tested out the fastest ways to cool a soda. He cooled soda in the fridge, the freezer and with two coolers — one with ice water and the other with ice.

“I felt really proud of myself and the people who helped me with my project,” Jamar said. 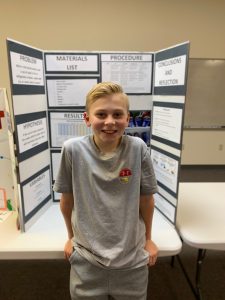 Endy Elementary 5th-grader Ashton Jamar is a science fair district winner. He tested out the fastest way to cool a soda.

Ethan Barringer tested how paint splatters when dropped into a box with a spinning piece of paper. He put together a cardboard box, complete with a piece of paper that would act as a spinner. He slowly added little drops of paint with the paper spinning in the box. He observed with different speeds (low, medium and fast) how much paint splattered.

His hypothesis was paint would splatter the most with the fast speed and he was correct.

“I was super surprised to win…I was not expecting it at all,” said Barringer.

Adalyn Frick and Grace Huneycutt teamed up and tested whether little gel water beads, which supposedly grow in water, would grow in other types of liquids.

Their hypothesis was the water beads would grow the most in mouthwash.

Besides mouthwash they also tested the water beads in buttermilk, distilled water, vegetable oil and Pepsi.

They discovered water beads grew the largest in distilled water.

“It felt like we were winning the lottery,” said Huneycutt, and Frick added she was “super shocked” to win.

Her hypothesis was that the electrolysis method — using electrical charges combined with water and Arm and Hammer Super Washing Soda to remove rust — would work best.

She found vinegar was the best method to remove rust.

Karen Nixon, Endy’s principal, is proud of her students.

“They all worked very hard…and they said they enjoyed learning,” Nixon said. “It’s a great accomplishment for all of them.”