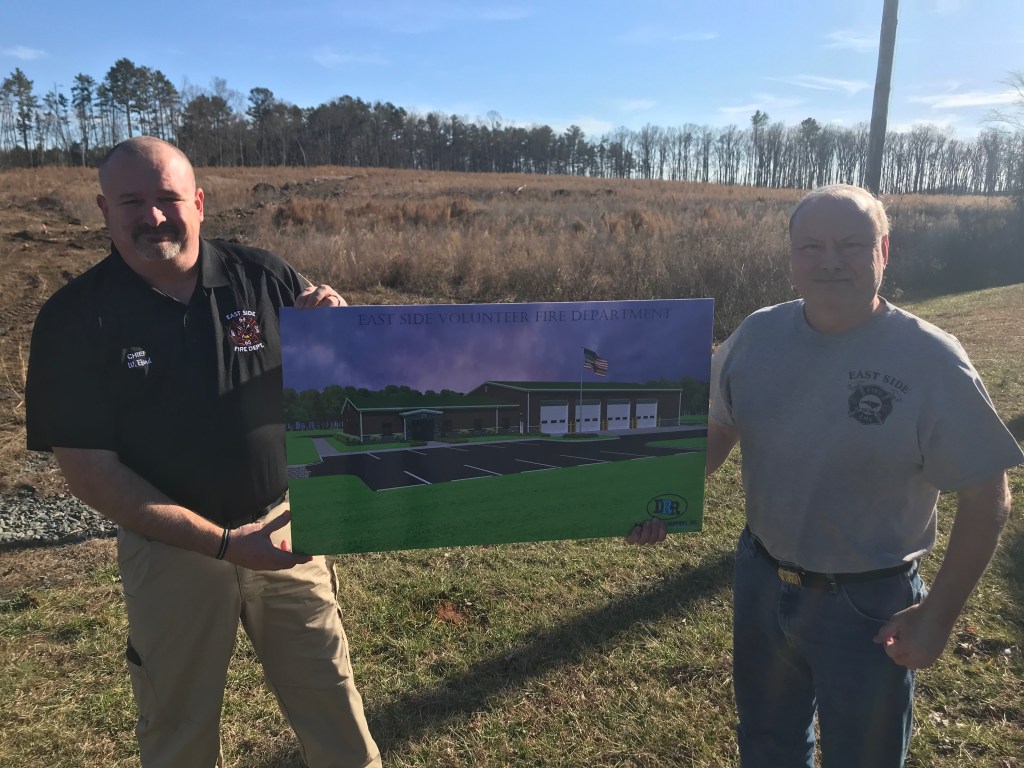 East Side Volunteer Fire Department Chief William Efird and Assistant Chief Robert Cranford hold a picture of the new fire station that will be built on the land behind them.

The East Side Volunteer Fire Department is planning to move locations due to the widening of N.C. Highway 24-27.

D.R. Reynolds Company, Inc. will build the new property. East Side Fire Chief William A. Efird said the department plans to move to the new location sometime around the beginning of next year. The company has helped to build several other fire stations in the county, said Efird.

The department has 34 firefighters.

The East Side Fire district runs from the east side of the Albemarle city limits all the way to Lake Tillery and includes Morrow Mountain.

East Side Fire Department has had talks with NCDOT about widening highway 24-27 since the 1970s, but the talks always ended up going nowhere, Efird said.

NCDOT approached the department again in 2012 about widening the road. That same year, the department established a long-range planning committee to start looking for land for the new station.

In preparation of the eventual move, in March 2013 the department proposed increasing the fire tax rate from 8 cents to 10 cents. This tax increase was approved in December at the department’s annual meeting.

The department had been balancing providing fire protection and having updated gear and technology with the possibility of the widening of highway 24-27 and having to change locations.

“It’s hard to do business like that because everything over the last several years is up in the air,” said Efird.

In 2014, DOT informed the department the highway was going to be widened and land would have to be acquired.

“We knew at that point that we had to start taking action,” said Efird. “So instead of funneling money strictly for fire protection, now we needed to buy land.”

The East Side Fire Department Board of Directors decided that same year to clear the land to see what they had.

In the summer of 2017, the state notified the department that highway 24-27 was expanding to four lanes and they would have to take their property.

They took preliminary plans for a new fire station to the board of directors in August 2017 and in October the board approved the initial building plans. The department presented the plans at its annual meeting in December with no opposition.

The department plans for the new station to have four apparatus bays to park the trucks; a meeting room/training room; a day room for officers to relax; a kitchen; a few offices; and showers — which they don’t currently have — for firefighters to decontaminate and clean themselves.

The new station will also have upgrades, including expanded parking for citizens when they come to vote.

The highway expansion will eventually be built but no matter what, the department will still have to put out fires.

“That’s been our focus,” said Efird. “That’s why we are a fire department.”