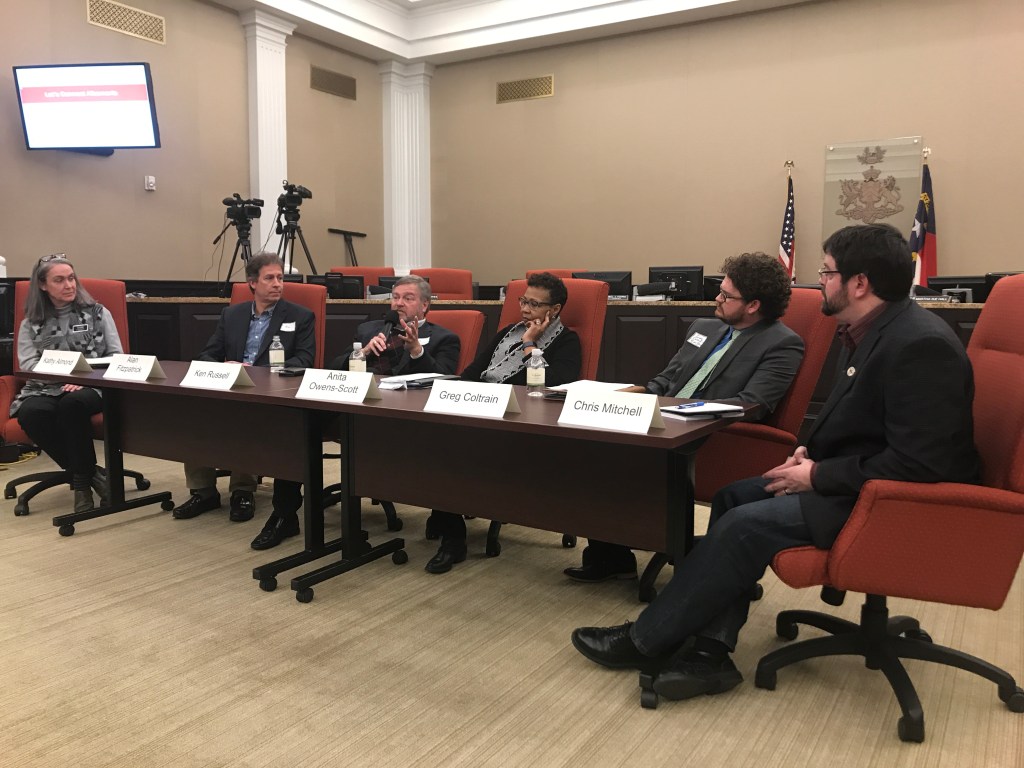 “There’s a lot of towns out there that don’t have the internet broadband connectivity that they need,” said Scott Mooneyham, director of public affairs at the North Carolina League of Municipalities.

One of the main topics was the gap between fast, efficient broadband internet connectivity in many urban areas in North Carolina, including parts of Charlotte and Raleigh, compared to the rural areas that are still struggling with access to connectivity.

What sets North Carolina apart from other states is it has above average investment in high capacity networks in urban areas., according to Christopher Mitchell, community broadband networks director for the Institute for Local Self-Reliance and keynote speaker at the event.

In rural areas, there is less investment, Mitchell said. A major reason is it is expensive to build the networks in low density areas.

“In general, most of rural N.C. has pretty poor access,” said Mitchell, “and I would say not an obvious solution for where better access is going to come from because providers like CenturyLink and AT&T that serve telephone to a lot of rural North Carolina do not have the capacity or the interest in upgrading those services, so there needs to be some other actor that comes in to provide that investment.”

The ultimate goal behind the event is to eventually “have high quality internet access to everyone,” Mitchell said.

“Everyone in the nation is going to have it,” Mitchell said. “The question is, is it going to take 20 years or seven years?”

Mitchell said Stanly is a classic rural county with the major population center of Albemarle having “pretty adequate” internet access compared to the other cities around it. But he said even Albemarle does not have the access people in Charlotte or Raleigh possess.

Alan Fitzpatrick and Greg Coltrain were two local speakers at the event.

Fitzpatrick is the CEO of Open Broadband LLC, which provides hybrid fiber and fixed wireless solutions to bring broadband internet to communities in the state. Fitzpatrick said Open Broadband has many customers, including Pfeiffer University.

Open Broadband plans to roll out in the near future a gigabit wireless ring across Stanly and they have already signed a contract with the county for access to cell towers.

Coltrain is the vice president of business development at RiverStreet Networks, which provides high speed broadband internet access to rural areas in the state.

“The ability to have broadband allows you to live where you want to live,” Fitzpatrick said.

Stacy Hale of Windstream announced that in March, symmetrical gigabits service will be available everywhere in Albemarle, to both residents and businesses.

Coltrain mentioned concerned citizens vested in the community could create a broadband subcommittee and work directly for the county political leaders to think about ideas and bring them forward. These same individuals become grassroots advocates and ultimately “become champions out there in the community.”

Another option is conducting a survey to aggregate demand to show a large swath of people in Stanly want better broadband access and show the survey data to local internet providers, Fitzpatrick said.

“Over the next 50 years, we will see the internet change society more than what electricity has done,” Mitchell said.

The event was organized by the North Carolina League of Municipalities, N.C. Hearts Gigabit and the Community Broadband Networks Initiative at the Institute of Local Self-Reliance.