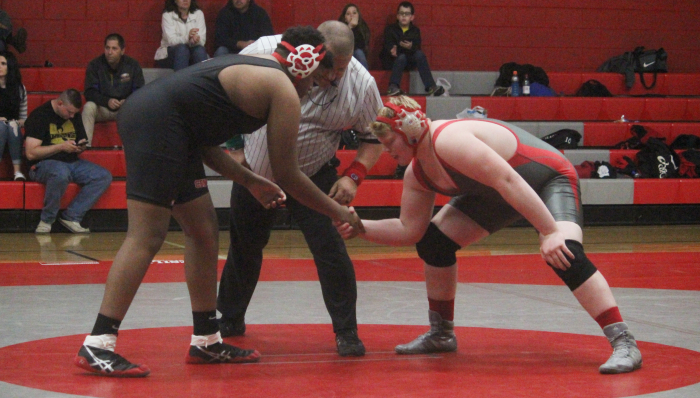 Led by 100-career win wrestler Cade Whitley, the South Stanly wrestling team hosted Chatham Central and Rosewood in first and second round 1A dual team playoffs matchups on Tuesday night. The Bulls won over Chatham Central, 48-25, but were eliminated from the state playoffs with an 45-30 loss to Rosewood.

Whitley earned his 100th win Saturday in the finals of the Yadkin Valley Conference tournament with a pinfall over Albemarle’s Unique Carvalho in 5:20.

What makes Whitley’s career accomplishment more impressive as the seventh South Stanly wrestler ever to earn 100 career wins was the adversity he went through last season. He suffered a slight injury to his right knee, came back, then suffered an even more serious injury and missed a big part of the 2017-18 season.

The South heavyweight said his focus during the conference wrestling schedule was less on getting that 100th win and more about the team.

“First things first, I wanted to pay attention on how I could support my team for the conference. Everyone’s points on the team counts so I really didn’t care if I got my 100th win then or later in the season. I just wanted to make sure I supported my team through the tournament,” Whitley said.

Earning 100 career wins in wrestling is a rare feat, Whitley said, “which takes a lot of hard work, a lot of practice days. You can’t take any days off. You have to be there every single day and work hard.”

The senior said he was friends with several former 100 win wrestlers at South, including Thomas Yarbrough and Cody Pugh. In 2016 and 2017, Pugh won 1A state titles for the Bulls.

“I try to work every single day as hard as they did,” Whitley said.

Wrestling is physically challenging, Whitley said, but he believes most people do not realize  how mentally demanding the sport is.

“Let’s say I’m about to wrestle a match and I look over to the other side of the court and see a huge guy…this can go two ways. Either I think, ‘He’s a monster and he’s going to kill me’ or ‘I’m going to give my all, put my heart on the line and wrestle all I can.’ That’s how mental wrestling is. If you think that guy’s going to beat you, you’re already defeated,” Whitley said.

On Tuesday, Whitley’s walkup to check in for the heavyweight matchup against Chatham’s Wesley Buie took longer then the match itself. The senior immediately took Buie down to the mat and pinned him in 13 seconds, giving him 39 wins on the season to just three losses.

However, Whitley, who weighs in around 250 pounds, faced a big challenge in 281-pound Nyterrius Williams from Rosewood. The two wrestlers fought to a stalemate for nearly four minutes before a mistake by Whitley gave Williams (24-4) a chance to get the upper hand. Whitley was pinned by the Rosewood senior with four seconds left in the second period.

“Even though you never want to lose a match, it’s obvious Cade is going to see (Williams) at regional. I think Cade knows what he has to do to go in there and get the win,” South coach Michael Curlee said.

The loss for Whitley ended a 21-match win streak for the South senior, but both wrestlers will advance to Saturday’s individual wrestling regional at Rosewood.

“My sophomore year, I went to state. My junior year, I had a traumatic injury that cost me the end of the season. The main thing for my last year of wrestling is get back to state, do what it takes and hopefully one day I’ll see my name on the wall in that mat room,” Whitley said.

Regarding the team’s performance against Chatham Central and Rosewood, Curlee said South has “a young group of guys and they are the ones who came through tonight. It was exciting to see everybody come together.”

Against the Bears, South got pinfall wins from Whitley, Trenten Drake (138) and Rodney Hammonds (160). Hammonds was South’s other wrestler who won an individual YVC championship at this year’s conference tourney.

The Bulls also got pinfall wins in the Rosewood match from Hammonds, Landon Greene (152) and Michael Gabbard (126).

Brackets for the individual regional tournaments are scheduled to be released by the NCHSAA on Wednesday.