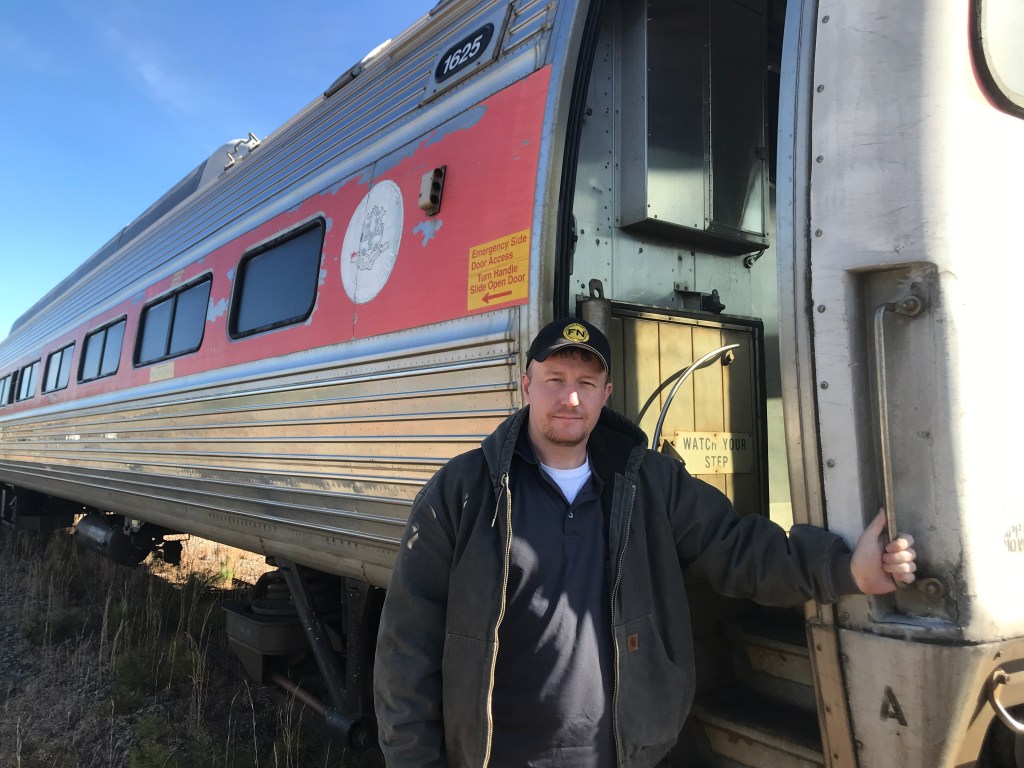 John Elkin in front of one of his passenger cars. His company, Foxville and Northern Railroad, is helping to revitalize the Badin community.

A new railroad company is setting up shop in Badin, working to help revitalize the community and get it back on the right economic track.

Foxville and Northern Railroad Company LLC operates the main railroad line at the Badin Business Park (the line is owned by the business park) and is working to set up freight operations in the near future. Many potential companies have already contacted Foxville interested in shipping with them and one person is coming to Badin for a site visit.

Originally formed in 2014 by friends John Elkin and Adam McDowell, Foxville, according to its website,“was founded on the belief that a railroad built with sound business principles and excellent customer service can provide a superior transportation product.”

The company is 100 percent veteran owned — with Elkin still serving in the Army National Guard and McDowell with the Navy — and is a Common Carrier Class III railroad with connections to two major Class 1 railroads, the CSX Transportation and the Norfolk Southern Railway.

The company is headquartered in Pelion, S.C., where Elkin lives, but will eventually relocate to Badin.

Foxville scoured North Carolina looking for areas with good tracks and around 2016, the company chose Badin because of the potential of its business park.

“I spend a great many hours marketing the potential that Badin offers,” said Elkin.  “Many of the potential shippers immediately see that potential and it has resulted in many meetings about how to locate those business opportunities here.”

While Elkin cannot discuss with the SNAP which businesses he has talked to, he said if the businesses relocate to Badin due to the railroad, announcements will be made.

“Badin had a business park at the end of it with several hundred acres available that the owner is actively trying to develop and turn over to other industrial activity,” Elkin said. “You don’t find that in a lot of places.”

Elkin is the general manager and as of now the only full-time employee. There are five other part-time employees, including McDowell.

The company owns 14 passenger cars it leases to tourist operations around the area. Seven of the cars are at the N.C. Transportation Museum in Spencer. Foxville possesses two locomotives as well.

The track was originally built by Alcoa, which had a smelting plant in Badin, and was mainly used to bring in the raw materials for the plant. The track has been dormant since Alcoa shuttered its plant in 2007.

The main track — also referred to as the Badin Branch track — is 11 miles long and starts in New London, right behind North Stanly High School, and ends at the business park in Badin.

“This is a very unique railroad,” Elkin said. “It offers a lot of potential.”

There is also a sliver of line that runs along a narrow track of land in the middle of Badin Lake, which has become a popular fishing spot.

For their own safety, Elkin has to tell people fishing to politely leave the track.

“Mistakes on the railroad can cost lives,” Elkin said. “You can’t replace a life.” 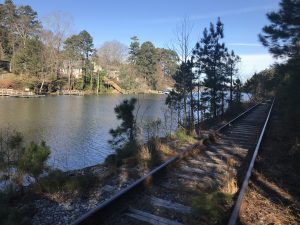 The railroad track runs alongside beautiful stretches of Badin Lake.

Elkin and the rest of the employees spend much of their time cutting down trees that run alongside or, in some cases, directly on the main track with chainsaws. They have been cutting trees since the beginning of August.

“The track is actually in pretty decent shape,” Elkin said, “but to be able to haul heavy freight, it’s going to require upgrading timber cross-ties and some parts will require upgraded rail.”

They are required to cut trees 20 to 25 feet from the center line for safety purposes and preservation of the track.

“I can’t wait until we bring a train to the west end section of the track around New London,” Elkin said, because there hasn’t been a train on it in more than 20 years.

As Elkin and others have been cutting trees, people living near the track have often brought them water, sandwiches and even some deer meat, Elkin said.

Elkin has tried to introduce himself and make contact with as many people living beside the track as he can.

Most people Elkin has met have been great, but occasionally people living near the track have dumped trash on the line and at times “it’s been an issue,” he said.

Elkins met with the Badin Town Council last summer about buying the main track and “they’ve been very supportive,” he said.

“Rail is an important economic driver and certainly the ability to realize opportunities for local prosperity increases with active lines and a renewed means of local access,” said Jay Almond, Badin town manager.

“Whether it bears freight or folks, a working rail line in the Badin Business Park is, without question, an asset in Stanly County,” Almond added.

Born to be a railroad man

It seems like Elkin was destined to work in the railroad business.

His great-grandfather and great-uncle worked in the railroad business and he grew up volunteering at a small railroad museum outside of Columbia, S.C. He even received the stereotypical toy train set for Christmas as a small child.

But he has one moment in particular that stands out.

“Riding behind a steam engine as a 5-year-old probably is what cemented my love for railroads,” he said.

Elkin was also a conductor for many years for the Norfolk Southern Railway.

He also volunteers his time at the Transportation Museum in Spencer.

“We’ve had nothing but positive comments and contact from everybody in the community,” Elkin said.

Everyone has a part to play in making sure the cogs of the community are always turning, he said.

As much as he loves railroads, he understands many people don’t see it that way.

“The perception is railroads are an old technology that’s on its way out,” Elkin said, “but large companies are often locating next to railroads.”

And railroads still serve a practical purpose. Without railroads and trains to move objects around the country, highways would become extremely congested, he said.

“One railcar can take three to four trucks off the highway when it comes to moving stuff,” Elkin said.

Even though it’s Elkin’s job, when he talks about railroads, the kid in him often comes out.

“I want to move freight, but the kid in me just wants to run that locomotive,” he said.