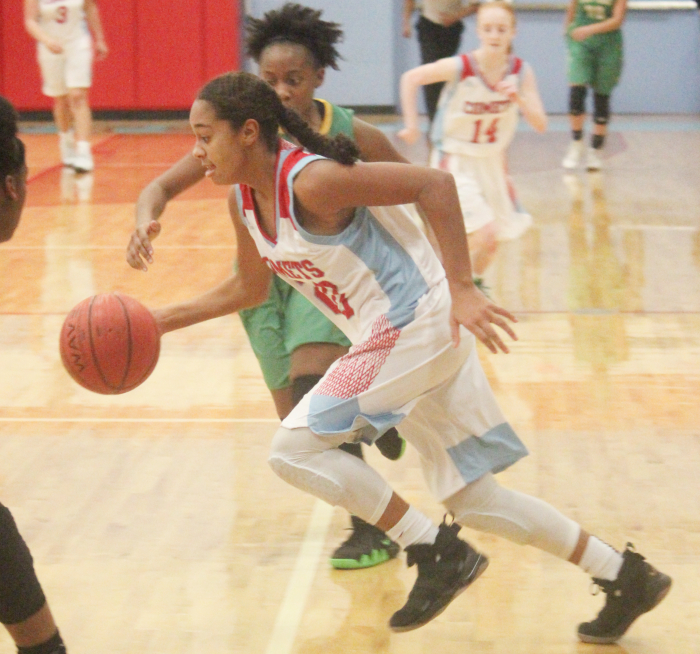 The Comets' Lexi Goode drives past a North Rowan defender in the second half of Wednesday's game. (Photo by Charles Curcio)

North Stanly continues to run plays the team has used since 2003 when Greg Speight took over as coach, including an inbounding play where all five players get involved to get the ball quickly down court. The play could be called “Carolina,” as it comes from the playbook of legendary Tar Heel coach Dean Smith.

What differs this season as opposed to the others for the Comets under Speight has been the team’s struggles to find victories. Those struggles continued Wednesday night in a 58-48 home loss to the North Rowan Cavaliers.

The loss puts the Comets at 2-12 overall (1-9 in YVC play), putting the team well below the .500 mark for the season. Should that trend continued, this season would be just the third time in 16 years under Speight in which the team finished below .500. Speight’s lowest win total as the Comets’ coach came in 2014-15 when the team finished 7-14 overall and did not qualify for the state playoffs. Through Tuesday night, Speight’s overall record with the Comets is 301-103.

As a program, North Stanly’s lowest win total came under coach Lonnie Chandler in the 1982-83 season when the Comets were 5-17 overall in the 2A classification in the Rocky River Conference.

The future looks bright for North in terms of freshman guard Lexi Goode. She was tied for second in scoring for the Comets Wednesday with 11.

Senior Camille Shelton led North with 16, while senior Payton Landis also had 11 for the Comets.